It looks like full steam ahead for the rad, unique, 39-story residential tower by acclaimed Chicago architect Jeanne Gang that's been proposed for 160 Folsom Street, one of the final pieces of land up for grabs in the Transbay district. Two years in, the tower  which Gang describes as featuring "migrating bays" that create a spiral effect on its facades  was the source of some hemming and hawing over the last year. The approval process for it was delayed when some nearby residents at the Infinity towers tried to quash an effort by the developer to add 100 feet to the tower height  something that was going to be beneficial both architecturally and economically, but which may impede some views for the upper-story residents of that earlier built complex. That extra height was ultimately approved by the Board of Supervisors this spring, and as the Chron's John King reports this week, the project's design just won the approval of the city’s Office of Community Investment and Infrastructure, which as he explains is "the relatively obscure commission that oversees the redevelopment of land in the Transbay district that once was covered by freeway ramps."

Now all that remains is a final vote by the Board of Supervisors this summer to approve the sale of the land to Tishman Speyer, the developer.

The design review process involved some tweaks in particular to the smaller buildings sharing the block with the tower, townhouses and an eight-story wing, much of which will contain below-market-rate housing and which will most impact the pedestrian-level view of the development.

As you can see below, the buildings create a three-color streetscape, the largest being copper colored, and King gives his approval saying, "If the lower portions of the block are visually distinctive, that will make them look stronger as independent pieces of the neighborhood that’s starting to take shape around them." 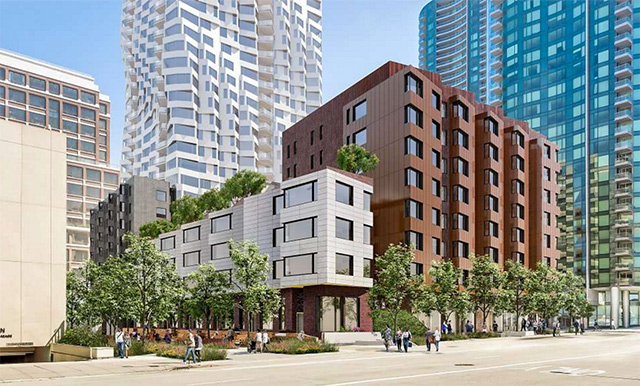 Also working in this project's favor is the fact that of the total 391 units, 141 will be below-market-rate, with 64 of those designated for middle-income buyers. The affordable units will, at the behest of Planning, be distributed throughout the tower up to the 26th floor.

Below, a rendering of the eventual skyline as seen from the Bay Bridge, with 160 Folsom there a block off of the Embarcadero, behind Gap headquarters. 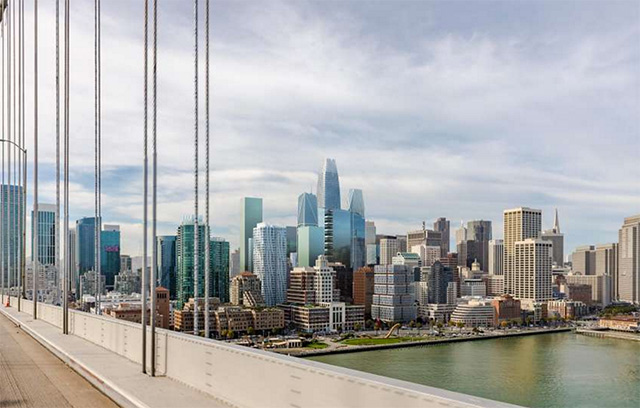 The city of San Francisco will be going to court to make sure that homeowners renting units on HomeAway, a short-term rental listing company that also owns Airbnb competitor VRBO, are paying their

—
Awesome, Twisty Tower Designed By Jeanne Gang For 160 Folsom Gets Another Approval
Share this