As is our custom in the days leading up to the annual Bay to Breakers footrace, bacchanal, and sh*tshow, SFist again presents a fully updated Bay to Breakers Liquor Store Map to help you locate more booze, cigarettes, and whatever other various sundries you may need when stuck in the remote regions of the race like Golden Gate Park.

For the first year ever, this interactive Google Map is now equipped with the “little blue dot” functionality on both iOS and Android smartphones to show where you are in relation to the closest liquor store! You also see a blue line showing the race course itself, and red bottles representing the exact locations of the liquor stores open during race hours. This map can be accessed on your smartphone during the race by visiting bit.ly/b2bliquor or via more detailed download instructions at the bottom of this article.

There is only one major change to this year’s map, but it’s a big one. Bi-Rite Market on Divisadero will shutter its doors until 1 p.m. this Sunday, so their craft microbrews and fancy wine varietals will not be available to you drunken, Bay-to-Breakering fools. This is a shocker, considering how this Bi-Rite had so magnificently catered to drunken Bay to Breakers foolery in recent years (even selling cups and bottle openers to facilitate open container consumption). The morning closure of this Bi-Rite leaves the freshly repainted New Star-Ell Liquor across the street as the very last liquor store you will encounter directly on the race course — even though you are not yet even halfway through the race! 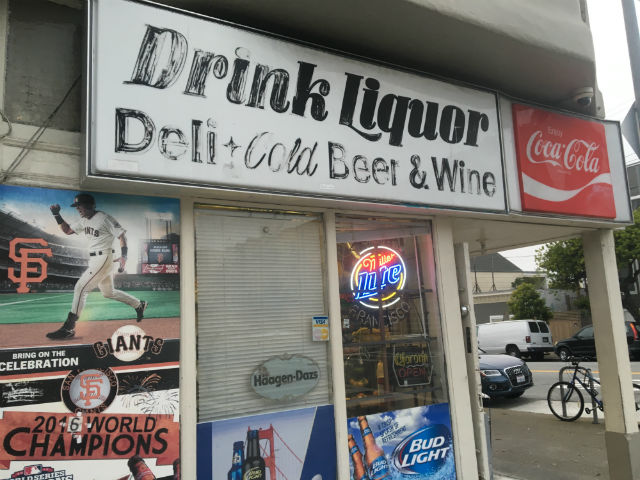 Beyond that is where this map comes in handy. The pastoral but remote nether regions of Golden Gate Park pose an enormous challenge to those “runners” whose main running involves “running out of alcohol”. There are no liquor stores along the park-adjacent Fulton Street and Lincoln Way, and liquor stores are difficult as heck to find if you’re not familiar with the Richmond and Sunset neighborhoods. If accessing the map on your smartphone, your whereabouts will be shown as a location-sensitive blue dot to help you determine the most logical and easy spots to hop off the race course, procure more booze, and return to the revelry of your inebriated slouch to the Finish Line.

You can access the map on your smartphone during Sunday’s festivities if you can just remember the URL bit.ly/b2bliquor. If you’d rather bookmark it ahead of time in anticipation of being too hammered to properly type, here are instructions to bookmark the URL on an iPhone or to bookmark the URL on Android. (This being a Google Map, iPhone users may need to sign in to your Google account — or for that matter even have a Google account). Google Maps is pretty good about showing locations of Golden Gate Park's little paths out to the avenues, and the liquor stores’ addresses and names will display in a legend if you click on the red bottle icons.

It's Etiquette Week at SFist, in which SFist's editors dole out some prescriptive advice for how to behave in this city we all share in order not to overly annoy, offend, or otherwise

A Utah man is asking Tesla to investigate after he claims his Model S drove itself into a parked tractor-trailer. The Fremont manufacturer, meanwhile, rejects the allegation that its self-driving software is to

—
Behold: The Bay to Breakers Liquor Store Map For 2016
Share this