Splitting the bill at a restaurant has, with the invention of Venmo and other such apps, become a bit less of a fumbling, theatrical experience in our contemporary times, provided someone at your table understands how to use the calculator on their phone as well. That's not to say it's always a simple matter however...

Splitting a Check When Not Everyone Has a Job
In general, we've believers in the rule of just splitting it evenly, for the sake of ease and lack of awkwardness. However, this breaks down if one person is super broke and intentionally orders the cheapest thing on the menu. While the super broke should probably just avoid these group dining situations with people who aren't good friends, this is always going to crop up in certain friend circles, and there are a few options here. 1) If cash is tight and your group is large, it may be easiest just to identify a daddy/mommy/close friend at the table to spot you specifically for the night rather than asking the whole group to deal with you shorting them. Then you just pay daddy later. 2) If you're the rich one in the group and a poor lamb has hinted that they're just going to order one appetizer and share a beer because they're broke, you can be the magnanimous one and quietly offer to cover their share. Say, "Get me later when you're famous," and they will smile and perhaps even offer sexual favors. (But never expect such things!) 3) If you're with two good friends and everyone knows your current sitch, you say, "Hey, I got the $9 burrito and one $3 beer, so I'll Venmo the two of you each $7.50" (that being the total, plus tip, divided by two). Chances are, somebody's just going to volunteer to spot you that burrito and beer, but if not, everyone's happy.

Splitting the Tab On a Date
Especially if this is a boy-girl date for drinks, and especially if it's with someone roughly your age, you should both expect to pay for yourselves, at least for drink one. The politics of paying for someone's booze or having them pay for yours is, to put it gently, fraught as fuck. Best not to get into the topic, here or on a first date. If you're dying to buy something for someone, at least wait until round two, when you have more information about your date.

For women who date men: Regardless of where you fall on the feminism scale, offering to split the check (which you should) is a great red flag meter in so many ways! Most guys will be pleased that you offered, and didn't just expect them to pay. Other guys will get weirdly angry, and that's fantastic, because now you know they were basically looking for a sister wife/slave instead of a real woman and you can make your escape. Still other guys will go overboard in their excitement that you offered to pay your share, and will eagerly use it as a chance to complain about all other women who don't make that offer as "gold-diggers" or "entitled." Run away from those dudes, because their seething distaste for women will end up getting to you eventually.

Birthdays
Really though, who has birthdays out at restaurants? OK, we know a lot of you do. We all like a nice meal out and want a place to celebrate, and many of us either don't cook or don't have homes big enough to host everyone. But here's the thing, and twentysomethings who have not learned this yet should take heed: If you are inviting people out to celebrate you, then you need to pay the bill. Sorry, you're an adult now, and that's how it is. Now, if someone else wants to arrange a birthday dinner for you, they can make a determination  either everyone else pays them or splits the check evenly, or they, the arranger pays, and that has been explained to invitees in advance.

In truth, assuming you have some space, it's a lot nicer and less awkward just to invite people over for your birthday, tell them to bring a bottle of something, and cook them something you can afford to foot the bill for (or order in!). You'll have more fun, no one will feel bitter about paying for their third birthday dinner that week, and you won't be pressured to leave the table after paying a bill, leading to more drunken fun times. This is the French way. We have much to learn from the French. 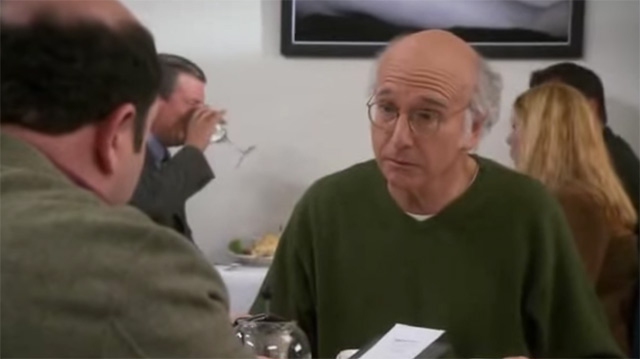 Tipping In Concert
Larry David insists on it. But you know what? Who cares about what Larry David thinks. Tip what you think is fair, and if you're insecure about it, ask your friends what they're tipping. The end.

Should You Offer to Pay the Tip When Someone Rich Covers the Tab?
The answer to this is basically No. Especially when you're dining with a wealthy friend who often covers the tab, constantly getting weird and saying, "Oh let us pay the tip" is going to grow tedious for all concerned, and everyone knows you don't mean it. The best thing is simply to be gracious and say, "Oh thank you. Are you sure?" That gives the rich person the chance to say, "No sweat! If you want to throw down for tip, feel free." But chances are they will just appreciate the acknowledgement.

How to Deal When Someone at the Table Isn't Drinking
First of all, those in recovery don't need the shame and awkwardness of the fact of their not drinking turned into a *thing* every damn time a check arrives, so friends should be sensitive to that and use their good sense to make as little a deal out of this process as possible. It's the responsibility of the drinkers, however, to make clear to the table that the non-drinker should pay less when everyone else had three rounds of $15 cocktails. Most of the time, non-drinkers are so used to this they may just say "Oh let's just split it evenly"  and let's face it, if they actually don't drink ever, they have plenty of money to spare. But if it's just someone on Sober October or whatever, or if they are simply wise enough not toss back several drinks on a school night, it's easiest just to come up with a fair sum for their meal, have them toss that in (in cash if possible), and everyone else splits the balance of the check and gratuity evenly.

How to Deal When Someone at the Table Over-Orders
We should all have the tact to realize that when we are not out with a significant other or BFF who is used to our bullshit, we should keep our spending/drinking habits in check when in a group-dining situation. Don't order the 40-ounce ribeye if everyone else is just having pasta. If everyone at the table is ordering wine by the glass, you do the same, and don't lap everyone twice without acknowledging that yourself when the check comes, and paying accordingly. If you're grabbing the bottle list and being given responsibility for ordering the wine, be sensitive to everyone's budgets and perhaps suggest a few options to the table at different price points. If you're going to take it upon yourself to order a $400 Burgundy because you've heard the vintage is exceptional and underrated, guess what: You should be picking up the whole tab. The whole tab. Because only then will you be forgiven for using the phrase, "I've heard this vintage is exceptional and underrated."

All other Etiquette Week 2016 posts.

A teenage girl knocked an unidentified 63-year-old woman to the floor of the 14-Mission bus last night at around 5:50 p.m., according to the Chronicle. The teenage girl, somewhere around 14

A white big-rig truck struck a tree early Tuesday morning and toppled it onto a tent where two homeless men were sleeping, on Folsom Street in the Mission District. The truck then fled

—
Etiquette Week: How To Split A Check
Share this