The bold, new Snøhetta-designed addition to the SFMOMA that we took you inside yesterday is already garnering some mixed emotions from architecture critics, and while we await the official word from the Chronicle's John King  he says his review will be in the May 8th paper, and so far he's just tweeted this and this and tells us "When pulling together a review, both intellectually and on the page, I make it a point not to read the competition until I’m done!"  we bring you a few thoughts from outside SF, some of which aren't that nice!

The LA Times' Christopher Hawthorne says the new structure "doesn't merely extend but performs a smooth lobotomy on the museum's existing building." He calls it "handsome, carefully intelligent, self-effacing and agreeable," but he also seems to say that the museum probably should have just knocked down the old Mario Botta-designed building (which is only 21 years old) and started fresh, just because of the awkwardness with which the architects had to wedge the huge new structure onto the rear of the site. He does, say, though, "The renderings suggested it might be some giant iceberg or museum-world cruise ship, sliding its overwhelming bulk into port just behind Botta's brick-wrapped wedding cake. In fact the final product is quite efficiently tucked away on a tricky and constrained site."

The New York Times' Jori Finkel calls it "a dynamic white structure that resembles a cruise ship," and in an earlier piece about some jewelry that's been commissioned for the museum's gift shop inspired by the new building's architecture, they quote Buenos Aires-based architect Diana Schimmel saying, "Who would match a Botta building with a Snøhetta building? It really is a challenge. They are as crazy as me." 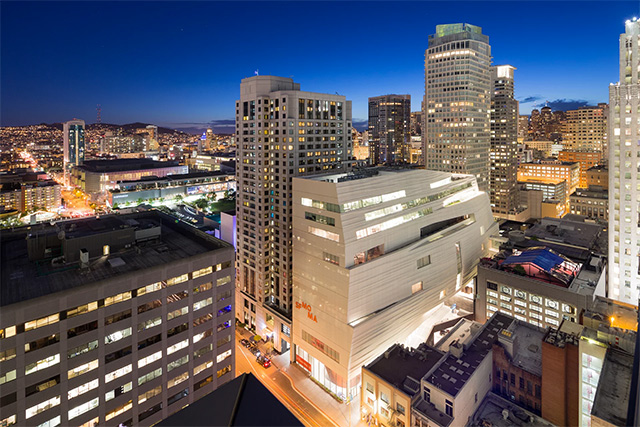 The real burns, so far, come from UK Guardian critic Oliver Wainwright, who writes of the architects' inspiration from SF's famous fog, "Fog isn’t the first thing that springs to mind when you encounter the rippling white cliff face that now looms behind the museum’s original home... It looks more like a gigantic meringue, a building-sized baked Alaska slumped on the skyline between Botta’s weighty temple and the elegant Art Deco tower of the Pacific Bell building behind." He hates what happened to the original Third Street lobby, where the old staircase has been replaced with a "jaunty" angled wood one that leads to the new second-floor lobby: "The effect is like erecting an IKEA flat-pack in a temple, the blonde wood jarring with the weighty granite columns."

And he doesn't stop there.

Clad in undulating panels of white fibre-reinforced polymer, which are intended to recall both fog and the rippling water in the bay, the building has a inescapable flimsiness, as if has been carved from polystyrene like the architectural models on display inside. The form is sliced flat where it meets the street, creating a shear surface “like a rock cracked open”, say the architects; but, clad with back-painted white glass, it instead presents the dumb elevation of a generic department store. Compared to the carefully detailed brickwork and banded granite blocks of the Botta building next door, the whole thing feels a bit cheap, in both material quality and architectural thinking.

Personally, and for what it's worth, I think the building is cool, and I appreciate any effort to liven San Francisco's all-too-boring skyline with as boldly shaped a thing as this is. The interiors work especially well  though in adding such vast amounts of gallery space that flows into the original galleries, people are bound to get lost. The LA Times guy has a point, though, when he says the building "is everywhere shaved off and pinned back, forever curving away from you." This seems in part to have been a way of approaching the awkwardness of the site itself, hemmed in by taller buildings, wrapping around the W Hotel, and wedged in, mid-block, where the handsomest face of the building can't even really be appreciated  unless, that is, you're on one of the upper floors of the Pacific Bell/Yelp building behind it, which is probably where that photo above was shot from.

As for the Botta building, I was never the hugest fan, it feels sort of stuck in the '80s, but I guess it would have been hard to justify demolishing something built 21 years ago, at great expense, that no doubt some surviving board members helped get built. I just wish that that undulating, rippled Snøhetta building could have existed somewhere else, on a hill or among trees in Golden Gate Park, where the fog image would have worked a bit better. 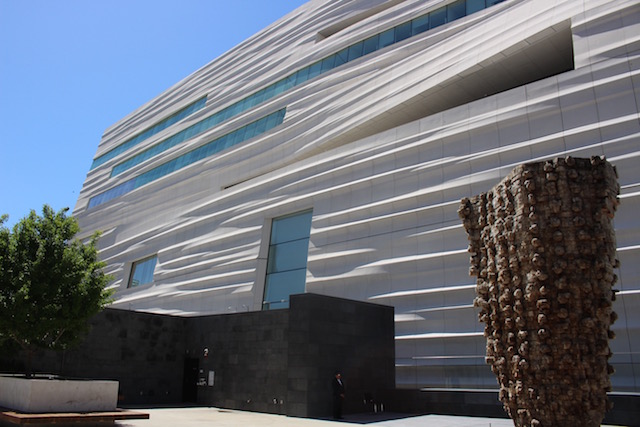 A view of the new Snøhetta expansion from the 5th floor sculpture garden. Photo: Caleb Pershan/SFist

Google yesterday filed a patent application with the United States Patent and Trademark Office for an electronic device that would be implanted directly into peoples' eyeballs. While it's all very preliminary, Forbes notes