Like the startup it follows, Silicon Valley has a high valuation. According to Deadline, the tech-skewering comedy from Office Space and Beavis and Butt-Head creator Mike Judge was renewed for a fourth season days before last night's Season 3 premiere, an episode called "Founder Friendly" that launches us right back into the constant conflict that makes for fast-growing companies and fast-paced comedy alike.

Richard Hendricks (Thomas Middleditch), Pied Piper's founder and CEO, has just won an intellectual property lawsuit against Silicon Valley giant and Google caricature Hooli. But there's no time to celebrate, because he's has been forced from his leading role by investors at nearly the same time. "You've created a company that is too valuable for you to run," robotic venture capital guru and Season 2 breakout character Laurie Bream (Suzanne Cryer) tells Richard. "You should feel good about that." Bream is prepared to back Pied Piper to the tune of $5 million at a $50 million valuation provided that Richard step aside and assume the role of Chief Technology Officer. In his former place at the helm? Industry veteran Jack "Action Jack" Barker (comedy veteran Stephen Tobolowsky) has been chosen to shepherd Pied Piper to IPO.

From here, the season premiere is a romping ego trip that pillories the follies of founders — many of whom, like Richard, are more technologically sharp than business savvy, whether or not they would care to admit it. "I'll even go to one of those CEO coaches like that guy at fucking Twitter," Richard says while Erlich Bachmann (T.J. Miller) rips one off one of his many creatively shaped bongs.

The two drive off down the Peninsula toward VC mecca Sand Hill Road to confront Bream, but on the way, crash into a robo-deer. "Fucking Stanford Robotics," Erlich shouts at the nightmarish device borrowed from the once Google-owned company Boston Dynamics.

Meanwhile, Pied Piper codebros Dinesh and Gilfoyle (Kumail Nanjiani and Martin Starr), a duo whose banter is always a highlight, debate whether or not to stay at Pied Piper. Richard has let them know he assumes they'll quit in solidarity, but they aren't so convinced. To discuss, they invent a code-inspired "patch" or preface to their complaints about Richard — "RIGBY," which stands in for "Richard Is Great, But Y'know." As their criticisms mount ("Seriously, fuck that guy," Dinesh say, "fuck him. RIGBY") they decide to stay despite him.

Over at Hooli, in light of the IP lawsuit loss, CEO Gavin Belson has a Silicon Valley non-apology to deliver before a hastily assembled group of employees. "We in the tech business often refer to failure as a good thing," Belson says. "Failure is growth, failure is learning, but sometimes failure is just failure. I think, — I'm sorry, i didn't think it would be this hard, but goodbyes are always hard, especially when I am the one saying goodbye." Here, though it sounds like Belson is about to resign, he zigs when you expect him to zag. "Today, effective immediately, I, Gavin Belson, am forced to say goodbye to the entire Nucleus division." That, as you'll recall, was the Google X-inspired team led by Richard's friend and former coworker Nelson "Big Head" Bighetti, a ploy to bolster Hooli's lawsuit against Pied Piper.

"It is I who must remain and bear the heavy burden of their failure," Belson concludes, "that is the price of leadership."

The speech, a nod to unceremonious tech company layoffs like those at Twitter, is interpreted by employees and investors as "amazing" and honest, launching Hooli stock up seven percent. Further, Belson is informed that the Achilles heel of their losing IP lawsuit, a "non-compete clause," invalidates up to 50 percent of Hooli employee contracts. Thus, Hooli downsizes further at no cost to the company, while they do provide Big Head a $20 million severance package, which he's earned for essentially having built a potato gun, chilling on the roof, and drinking Big Gulps.

While Erlich tries to persuade Richard to stay at Pied Piper — "we're looking at the 'D' word here — decacorn, a company valued at more than 10 billion before its initial public offering" — Jared, the company's den mother, encourages Richard to explore other job options. "You're the belle of the ball, and these are all your swains, hoping for a glimpse of ankle," says Jared to Richard, gesturing to hiring opportunities

But when Richard actually visits the seemingly San Francisco-based "Flutterbeam," he's nonplused. "We raised a shit ton of money and we're growing fast as balls but we're not exactly super psyched with the quality of our engineering," one young founder tell him. They then they show him what his "exciting" project would be: A photo filter that adds a variety of mustaches to your selfies. Flutterbeam, it would seem, is simply a joke about Snapchat's "groundbreaking" innovations.

Still exploring the option, Richard pays a visit to his disbarred arbitration lawyer, Pete (Matt McCoy) to discuss the terms of the contract with Flutterbeam. It's a jailhouse visit: Pete is back in the slammer because, as he deadpans from behind a severely black eye, "It began as an innocent celebration of our arbitration victory. I ordered a kombucha, which I did not know contained alcohol — it was described to me as a healthy organic tea. Next thing I knew I was 70 miles away wrapped in a blanket shaking off a meth high and facing charges for attacking a police horse with a shovel."

This represents a violation of Pete's parole, and now he must serve his entire sentence. Still, he's able to advise Richard, whom he says should stay at Hooli as Chief Technology Officer. Why does he want to leave, anyway, Pete asks Richard? The position is the same at both companies. "At least this way I don't have to eat shit," Richard says. To that, Pete responds, "Let me tell you something I learned here on the inside: Swallow your pride, or soon you'll be eating something far worse than shit."

In the end, Richard decides to meet with "Action Jack" Barker himself, who has already persuaded Erlich, mostly through flattery, that he's not "a gray-haired fossil." At his mansion, Barker tells Richard that if Richard isn't onboard, he's out too. "Without you handling the tech, I don't see how this company works" he says in a seemingly convincing tactic. Though Richard hasn't made up his mind by the episode's end, we're led to understand by the preview clip for next week's episode that the wunderkind will indeed eat his pride/shit. 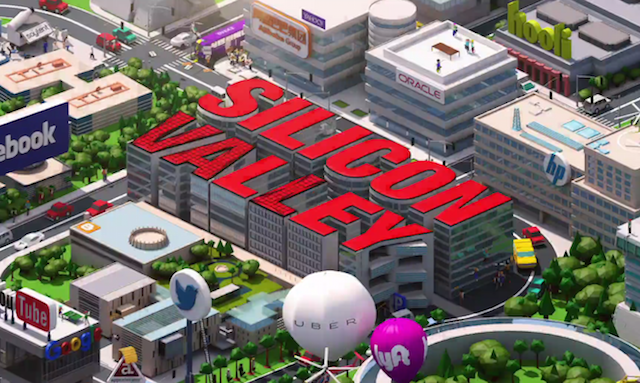 Looking at the show as a whole, it's interesting to consider how Silicon Valley co-exists with a public moment of fixation on tech companies and tech culture. Such moments and companies come and go, something of which the show's opening sequence provides an example. As Tech Insider observed, the giant Uber balloon from the credits is now threatened by a Lyft balloon, and Alibaba has taken over Yahoo's building. If Silicon Valley wants to live up to its high critical valuation, it's going to have to keep shifting along with the real-world events of the milieu it mocks. While that definitely happened this week, it's a task that could prove more difficult as more seasons unfold. There's trouble in Silicon Valley, and even so-called unicorns are in danger. The layoff jokes, for example mostly landed, but can the show continue to be funny in a real world where layoffs are less funny and the entire industry  and the volume of absurd startup names  slows down? If so, maybe we do have a decacorn on our hands.

Previously: Video: 'Silicon Valley' Cast Guesses At What Actual Startups Do By Their Dumb Names

Flipped car on Mission and 23rd this morning. Photos just sent to me by a friend. pic.twitter.com/wrl21DKSBN— Capp Street Crap (@cappstreetcrap) April 25, 2016 A crash between two vehicles this