As tourism booms in San Francisco with a record 25 million visitors in 2015, the historic Hearst building at Third and Market Streets may seek to capitalize on the trend with a conversion from office space to hotel rooms.

Hearst, a media empire with investments in real estate and ranching, once owned The Examiner newspaper, which occupied the Hearst building from its completion, in 1911, until 1965. Hearst now owns the Chronicle, who had the the early word on the conversion plan, revealed in the form of a letter to current tenants of the 13-story, 120,000-square-foot, fully occupied building.

JMA Ventures, who converted an area of Ghirardelli Square into a Fairmont hotel and condos, will work with Hearst on the project. “People like to stay in a building with a story to tell,” Todd Chapman, a JMA Ventures partner, told the paper.

And the Hearst building does have stories. New York architects Kirby, Petit & Green designed the original building, which in the area at the intersection of Third, Kearny and Market Streets was once also home to The Chronicle and the now-defunct Call, earning it the nickname "Newspaper Angle."

Future Bars, a nightlife group who operate establishments like Bourbon & Branch, have already drawn inspiration from the Hearst building's past life with their bar in the building's basement, Local Edition, equally capitalizing on the hipster trend of typewriters as decor.

“People really latched onto it," Future Bars partner Brian Sheehy tells the Chron. "They love to be in a building with so much history.” Also in the building, Future Bars operates The Lark (formerly Dave's, RIP) and a spirits shop, Cask. All have long term leases and plan to stay on the premises. 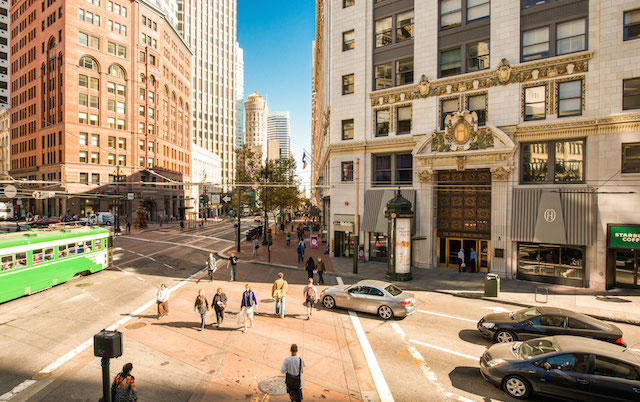 via the Hearst Building

The conversion won't happen overnight — in fact, it could take years, as tenants were told. Though that leaves them time to find new space, such a task has never been more daunting in San Francisco. So far, JMA Ventures have met with Supervisor Kim and representatives of the hotel workers union, Local 2. And, if and when it arrives, the Hearst building won't be alone — more than 4,000 hotel rooms at 12 hotels are in the proposal pipeline.

Related: Record Number Of Tourists Checked Out SF Last Year Cause We're Hot Like That

via the Hearst Building

That LGBT documentary mini-series that we told you about a few months back, When We Rise, has been shooting in recent weeks in Vancouver  most notably, they just shot parts of the White

How could this happen? Details are still scarce, but the legend that was Prince Rogers Nelson is dead. Many of you are probably saying, "He was just here!" and "Why didn't I go