A lot of people, but especially recent New York transplants, are pretty psyched about the arrival of The Halal Guys in San Francisco  something we've known about for a year now, but which only became a reality yesterday when the Tenderloin-based shop began lunchtime delivery service via Caviar. Famous for their gyros, gyro plates, and chicken plates  all slathered in mayonnaise-y white sauce  the Halal Guys are an old-fashioned American success story, growing from a food cart in midtown Manhattan now to a nationally expanding franchise.

I, myself, vaguely remember the cart near New York's MOMA from when I lived in the city over a decade ago, but this was in an era before street food became a more trustworthy "thing," and beyond hot dogs I was pretty wary of it. So, never having eaten anything from the Halal Guys, I logged a pre-order for today, and it just arrived an hour ago, and at the risk of sounding like a Yelper, I have some thoughts.

The Food: I got a standard chicken platter, which did indeed closely resemble the photo above, which was taken off the Caviar site on Monday. The site, and/or the restaurant, has since updated the menu with brighter, better styled images of the food, but make no mistake, you're not ordering anything pretty. It's a generous portion of what appears to be mostly dark-meat chicken, decently seasoned and tender and without any errant cartilage or gristle, sitting atop some bright orange-hued turmeric rice, with a few warm pita triangles, and a simple, undressed salad of iceberg lettuce and chopped tomato.

The white sauce reminds me of a more peppery take on ranch dressing, and it's got a creamy, canola oil/egg yolk base with a bit of vinegar, like mayo. It's a good match for the chicken and the simple salad, along with a few drops of the legit-hot hot sauce, and all told it's a good and satisfying, no-frills lunch. [Note: Via Gothamist, we provided this recipe last year of the original sauce from NY, nicknamed "Angel Jizz," and I can assure you that what's in these plastic packets from the franchisees contains no Greek yogurt, or sour cream, or horseradish, and it is canola oil-based. I suggest making your own.]

The Price: While $11.99 feels like an OK price for lunch that gets delivered, there are of course some hidden costs. First of all, Caviar has a $15 minimum order, so I tacked on some unnecessary extra packets of white sauce (99 cents each) to get me to the minimum. Then comes the $2.99 "service fee" and the $4.99 delivery fee, plus tax, so my $12 chicken plate actually cost $23.99. Compare that to the $7 that New Yorkers pay for the same meal, and we start to lose the value proposition here.

It remains unclear what the prices will be when the brick-and-mortar spot fully opens in the 'Loin, which may be soon.

One Minor Objection: It may not be so minor for you, but I did have a hair in my food. Maybe the assembly line ought to consider hairnets? 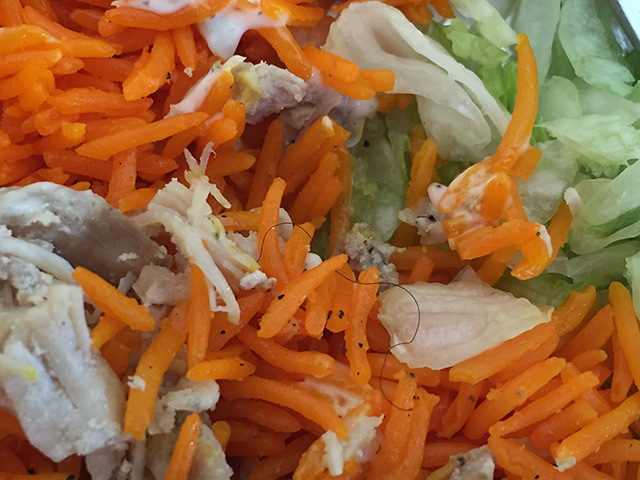 To be fair, they're on Day 2 (they have exactly zero Yelp reviews so far) but for some eaters, finding a hair is game over.

Would I Order Again: Eh, I'd probably wait to go to the actual shop, given the Caviar price issue. But, yeah, I'm hungry enough for a good gyro that I'll give it another go. Plus, I've got a stockpile of white sauce now, so...

Last we heard, back in September, some new owners of the property that houses the beloved Grubstake, off Polk Street on Pine, were being a bit vague about the future of the 40+

A study conducted by wealth management company Charles Schwab has us sighing deeply as we stare into our empty coffee cups this morning. According to 1,001 Bay Area residents aged 21 to

—
The Halal Guys In SF: An Admittedly Early Review
Share this