There seems to be no bubble when it comes to the Bay Area Beer Boom, a movement that's put us in the elite class of a select few American metro areas with vibrant craft beer scenes. San Francisco proper, in fact, is reaching a pre-Prohibition number of breweries, and just beyond our 7-by-7 are some nationally respected and locally loved gems. Yes, we might be a bit under the West Coast hop spell, but we've got a wide variety of styles in the IPA category and beyond. Here are some of the best local beers, most of which you can find year-round, that hopefully begin to represent that.


1776 IBA — Local Brewing
Local brewmaster Reagan Long calls her 1776 India Black Ale a "Cascadian Dark Ale." Named for the founding date of of the Presidio, this one is the kind of IPA that promises to coax drinkers into darker beer territory, with cedar and pine flavors from both earthy hops and roasty malts. The best way to get it? In SoMa on Bluxome Street, where Local's taproom will set you up with a flight of all the latest. — Caleb Pershan 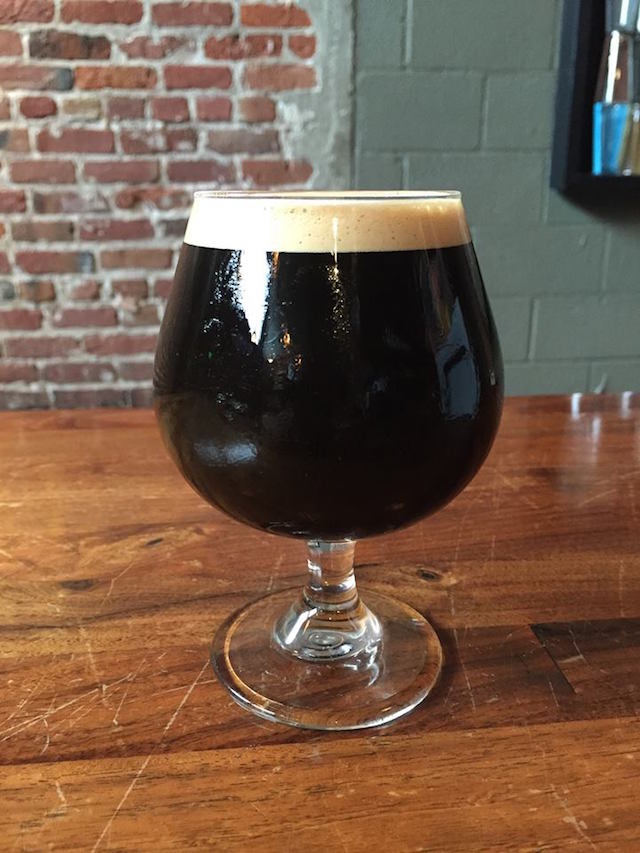 Coffee & Cigarettes — Cellarmaker Brewing Company
Cellarmaker's game is as fresh as it is because these folks very rarely bottle beer, distributing kegs about town selectively to the likes of Monk's Kettle and Toronado. Your best bet to get a taste is to journey to the source in SoMa: the brewery and taproom itself. There, you can't go wrong with any of the acclaimed beers brewed by Tim Sciascia, a Marin Brewing Co. alum who specializes in perfectly dank pale ales and beer names that make reference to David Bowie and Steely Dan. One standout, Coffee & Cigarettes — a dark, full-bodied, smoky and delicious porter — is usually available in some variety. Currently, it's an imperial version with Sightglass Coffee. This is one to show off, so get it in a growler and and take it on the road. Sadly, you can't take this one away in growlers. — Caleb Pershan

Drake's Brewing — Denogonizer
Why does Drake's call this self-described "dank, citrusy" beer the "Denogginizer"? No, it's not anything to do with alcohol's effect on your brain — back in 2004, when they were incubating the brew, a pressure valve flew off and nearly decapitated a staffer. The rest is big, bold, award-winning history. Drink it in bottles — the 24 oz. kind — or Drake's East Bay tap rooms. — Eve Batey 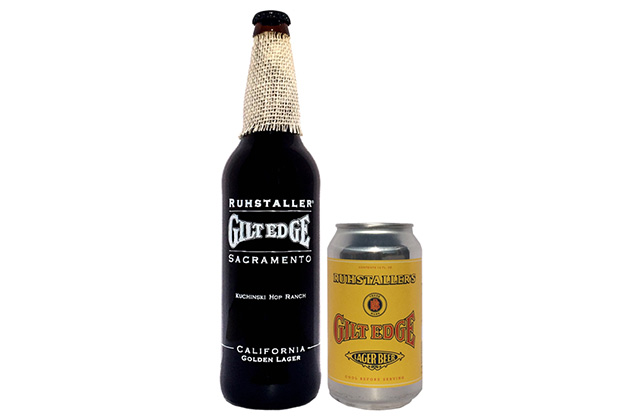 Gilt Edge — Ruhstaller Beer
Founded in 1881 in Sacramento and recently revived as a brand with a locally grown ethos, Ruhstaller has been steadily gaining traction among beer geeks in the region, making beers from entirely locally grown hops  not something that most breweries can boast. Their flagship lager, Gilt Edge, originally produced in the 1880's, is what you imagine the original Budweiser might have tasted like, back when it was brewed at a smaller scale and still tasted like something. It's got just enough bitterness and roundness to make you think you're drinking a noteworthy beer, but also goes down really smooth. In a word: delicious.  Jay Barmann 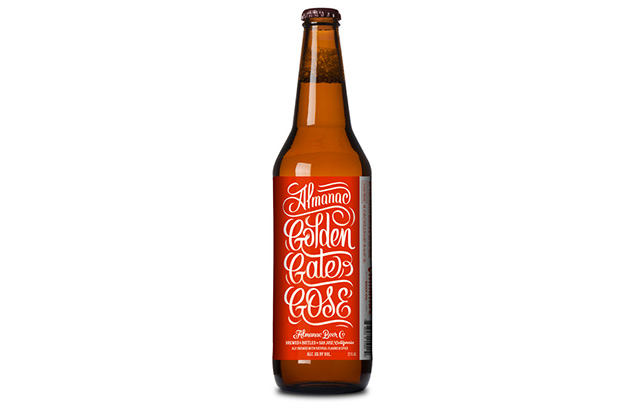 Golden Gate Gose — Almanac Beer Co.
Inspired by the lightly saline sour beer native to Leipzig, Germany, Almanac's take on a gose (pronounced goh-zuh) is tart and refreshing like lemonade, with just a hint of sea salt. And it's an all-local affair at this brewery, using ingredients like lemon verbena grown in Dixon, and Dirty Girl Produce coriander that's grown and dried in Santa Cruz specifically for Almanac. It's a totally refreshing, bright summer sipping beer, and ideal for the park.  Jay Barmann 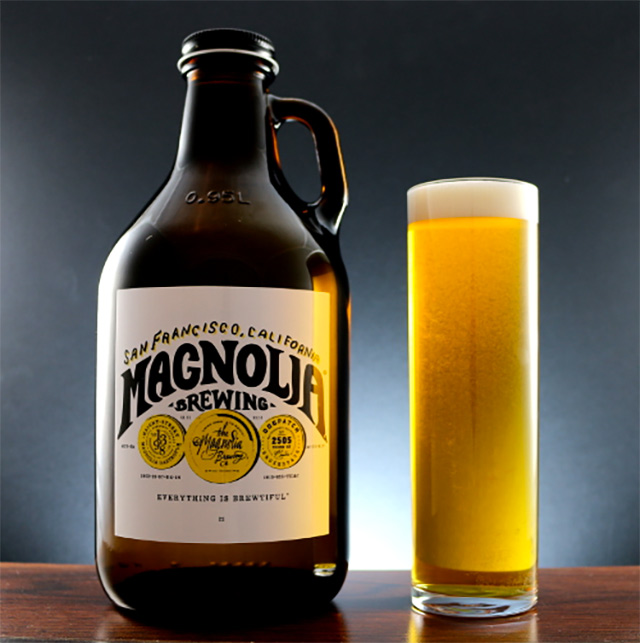 Kalifornia Kölsch — Magnolia Brewery
For those who like an easy-drinking lager but want a little extra complexity and depth, Magnolia makes this fine ale/lager hybrid modeled after Cologne, Germany's kölsch style. This California version is nonetheless made with yeast from Cologne, pilsner malt, and German Spalt and Hersbrucker hops. At 4.7% ABV it's also a fine session beer that you'll be able to put away a few of.  Jay Barmann

Anchor Brewing — Liberty Ale
Since 1975, Anchor has been brewing its distinctive Liberty Ale using, they say, "traditional craft brewing methods," so if you think the old ways are the best, this is the one for you. First formulated to commemorate the bicentennial of Paul Revere's famous ride, Anchor claims that the venerable brew is the one that can be credited with "starting a revolution"... in beer, that is. — Eve Batey 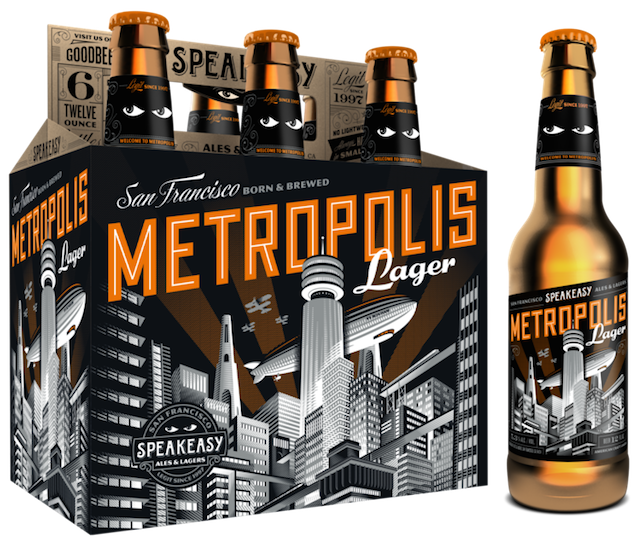 Metropolis Lager — Speakeasy Ales & Lagers
This year-round lager from Speakeasy stands out among the brewery's already formidable lineup of beers. At 5.3 percent, it's on the less boozy side of those options offered by the India Basin-based brewery, but don't let that fool you. Caramel malts combine with Pacific Gem hops to create a (very) drinkable lager. Drink it with salty cheeses, or all by its lonesome. Either way, Metropolis will do you right. — Jack Morse 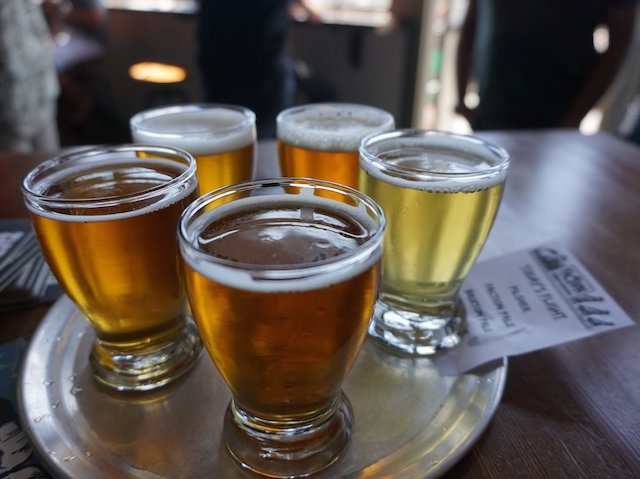 Pale Ale — Faction Brewing
Faction, a brewery opened in an Alameda hanger in 2013, has expanded their output rapidly in a short time, offering more and more expertly crafted beers thanks to husband and wife team Rodger Davis (formerly of Drake’s and Triple Rock) and Claudia Pamparana (formerly of 21st Amendment). The crowd favorite — other than the A-Town Pale, which is only available at the Alameda taproom itself — is their flagship pale ale, which is resiny, fruity, and refreshing. — Caleb Pershan 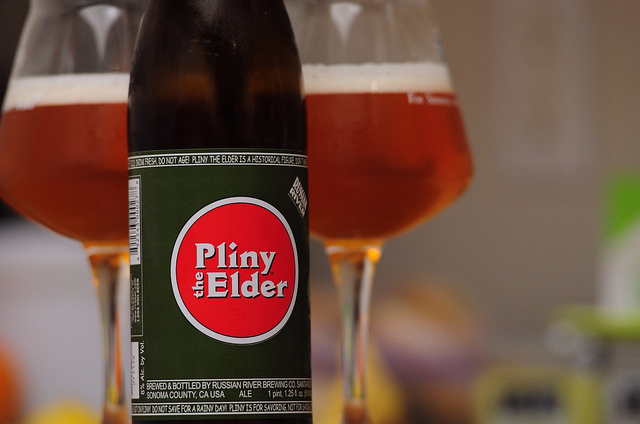 Russian River Brewing Company — Pliny the Elder
Unadvertised and unmarketed, Pliny the Elder is notorious for the long lines it attracts when bottles of it go on sale in area stores. Is it the brew's scarcity that attracts its loyal following? The folks at Russian River would say that it's actually the beer's "slightly bitter" taste "with a fresh hop aroma of floral, citrus, and pine" that draws acolytes. Of course, the Elder's scarcity is nothing compared to the once-a-year, limited release of Pliny the Younger, which never sees a bottle at all, and creates a regular, predictable frenzy on social media every February. — Eve Batey 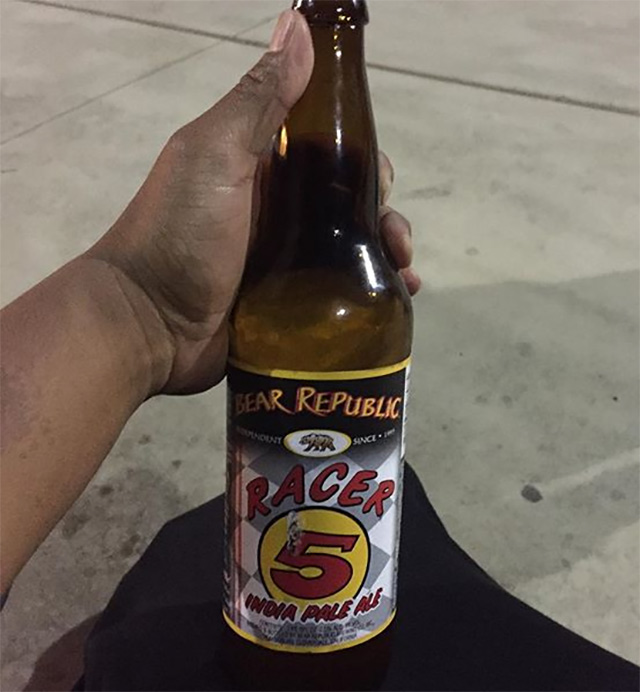 Racer 5 IPA - Bear Republic Brewing Co.
Local hopheads are all well aware of Racer 5, brewed in Sonoma County, one of the dominant, most pleasantly hoppy and boozy of our local IPAs, clocking in at 7.5% ABV. It is, to be sure, a bold but balanced, bitter beer that will get you drunk quick. And as Bear Republic tells us, it's one of the most medal-winning IPAs in the country, and "The malt base is designed to highlight the unique floral qualities Columbus and Cascade hops from the Pacific Northwest."  Jay Barmann 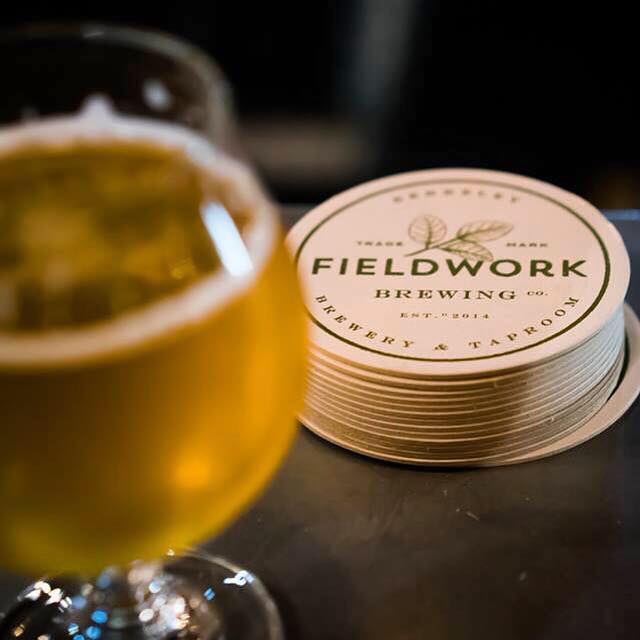 Sea Farmer — Fieldwork
This Berkeley-brewed IPA is saline, grapefruit-y, and named for a Jack London short story. Indeed, it is brewed with salt, and it pours a little hazy and golden. Swing by the brewery and taproom for a growler can or "crowler" of the stuff, or score it on tap around town when head brewer Alex Tweet (formerly of San Diego breweries Modern Times Beer and Ballast Point Brewing) has it in the brewery's rotation. — Caleb Pershan 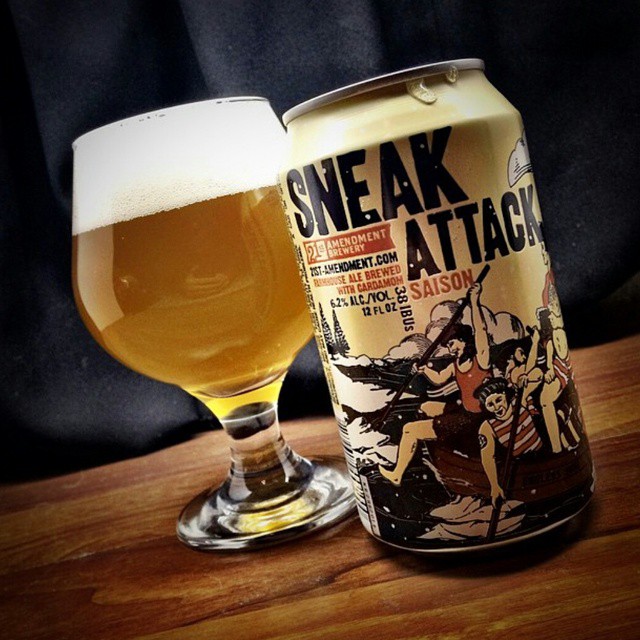 Sneak Attack — 21st Amendment Brewery
San Francisco is known for its unique seasonal proclivities, and so perhaps we shouldn't be surprised that local beer maker 21st Amendment Brewery bucks seasonal trends with its winter/early spring seasonal Sneak Attack. This saison is like a breath of fresh air on a wonderfully warm San Francisco winter day, and the cardamom pods used in its production assure the beer tastes like no simple Belgian farmhouse ale (which, to be fair, can be an extremely complex beer anyway). The company stops shipping the beer in March, which means that if you're like me, you've been snatching up whatever six packs can still be found at corner stores around the city. On a day like today, we cannot stress the following enough: Grab some Sneak Attack and head to the nearest park or beach. You won't regret it. — Jack Morse 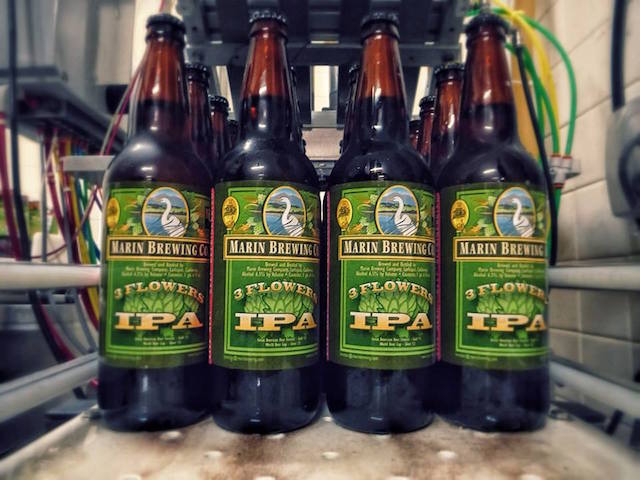 Three Flowers IPA — Marin Brewing Co.
The beer's eponymous three flowers: Citra, Cascade, and Chinook hops, together conspiring to create a consistently great IPA. Spicy and citrusy, this beer makes the list for its huffable aroma alone. For those who didn't know, Marin Brewing Co. has been operating out of Larkspur since 1989, putting it in OG craft beer territory. — Caleb Pershan 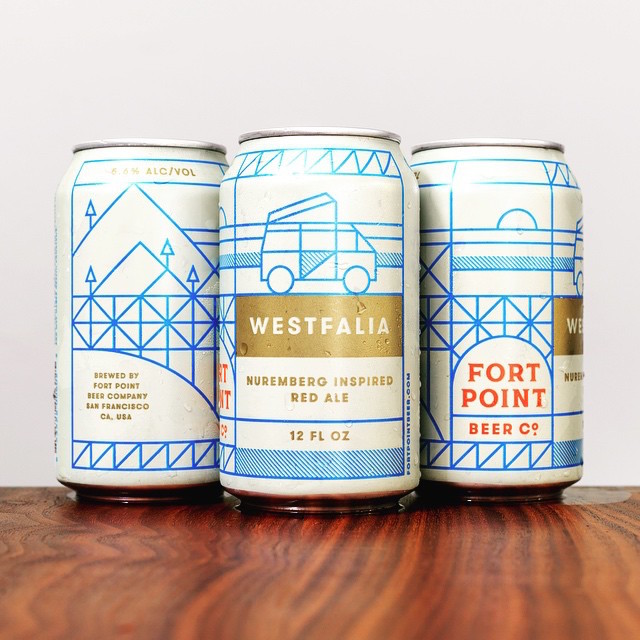 Westfalia — Fort Point Beer Company
Sure, you can find Fort Point's Presidio-brewed beer on taps all around town and even in their Ferry Building taproom. But I'd wager Fort Point's biggest influence in these parts was changing the park-going beer game when they started canning a variety of their flagship beers. To call one out, grab Westfalia, a Nuremberg Red Ale based on german rotbier style . It's designed with perfect malt richness and light bitterness by head brewer Mike Schnebeck, a Mill Valley Beerworks alum. — Caleb Pershan

Related: The 14 Best Beer Bars In SF And Oakland

A 54-year-old man was knocked to the ground and is now suffering life-threatening injuries after he was attacked Monday afternoon by a group of ne'er-do-well youths. This all happened, as KRON 4 reports,

Despite being nearly 50 years old, Janet Jackson apparently wants to have a baby immediately, and this means she will be canceling a scheduled return stop to the Bay Area at Concord Pavilion

—
The 15 Best Beers From Local Bay Area Breweries
Share this