Big Wheelers turned out big time Sunday for the 16th annual Bring Your Own Big Wheel rally on Vermont Street, where roughly 2,000 bunny-eared, onesie-clad, super hero costume-wearing San Franciscans — and a few hundred actual children — raced Big Wheels en masse down the city’s crookedest street. SFist has a treasury of pictures and videos of the proceedings, most notably this first-person video that shows exactly what it’s like to hot dog a Big Wheel down that hill.

“I didn't have a GoPro, so I went slow and took a video with my cell phone,” writes YouTuber Roger Filmyer. 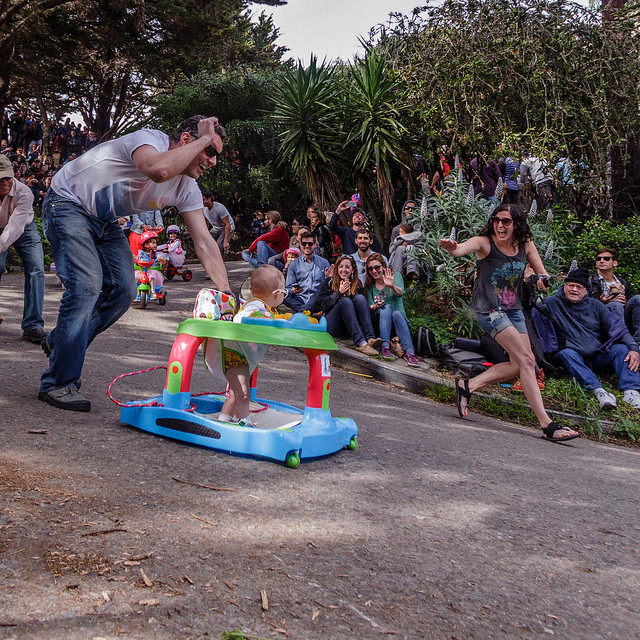 The costumes were exceptional, with some particular standouts like Wilma Flintstone and Betty Rubble, a silver-painted “Aladdin Sane”-style David Bowie, and two Spocks with USS Enterprise-refurbished Big Wheels as crowd favorites. But the biggest applause winner was the adorable infant Flossie, at eight months old the youngest-ever competitor in Bring Your Own Big Wheel history. The little nipper did not compete riding a Big Wheel, but instead the baby walker seen above. “It’s just a Fisher-Price walker,” Flossie’s mom told SFist. “It’s not good for downhill racing.” 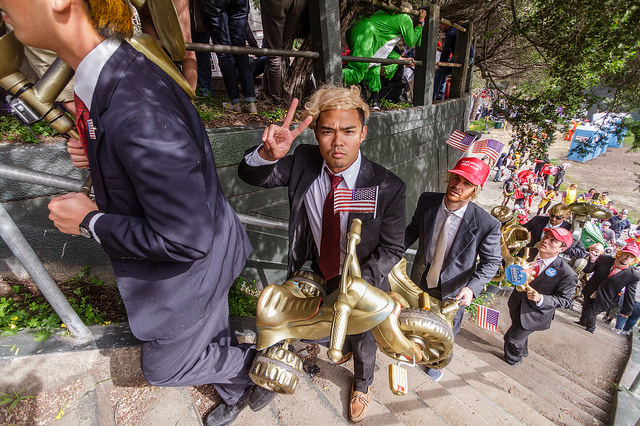 As one would imagine, quite a few Donald Trump and Donald Drumpf costumes were on hand, as well as a myriad of other presidential candidate costumes. “We have one person who may be Clinton or Sanders, but she’s undecided,” one of the Trump gaggle told SFist. 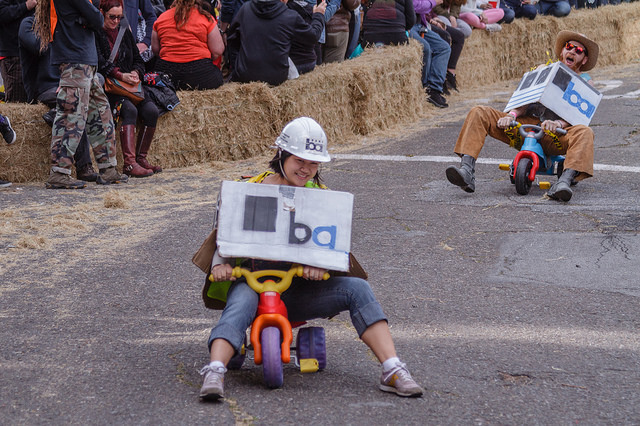 As Bring Your Own Big Wheel celebrated its 16th year, co-founder Frog reflected on the race’s growth and evolution  having moved from Lombard Street to Vermont Street in 2008 due to growing popularity. “It’s changed a lot because of neighborhood regulations,” Frog told SFist. “When you get to a certain size, you start to need the street permit and a park permit, because we use part of the [McKinley Square] park. It’s snowballed crowdwise into a costly event. With so many people now, there’s two different street permits which require us to have insurance and porta-potties and pay for cops and Parks and Rec cops, which are two different types of enforcement.”

Thus the reason that organizers keep fairly quiet on social media in recent years, telling fans to "keep your blabbing to a minimum" for fear that the crowd along the narrow street gets any bigger. 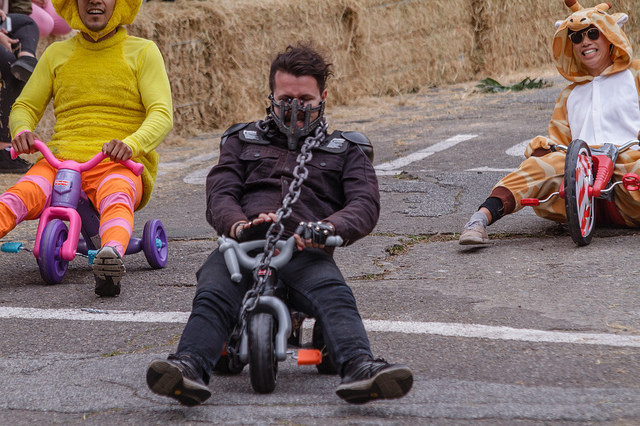 “It costs us about eight to ten thousand dollars a year,” Frog said, noting that the only vendor the race will allow is Daniel Webster Elementary School. The race has been approached by big brand names offering sponsorship deals, but they’ve all been turned down. “We don’t want it to turn into a commercial event. We just want it to be people out on Big Wheels,” Frog said. 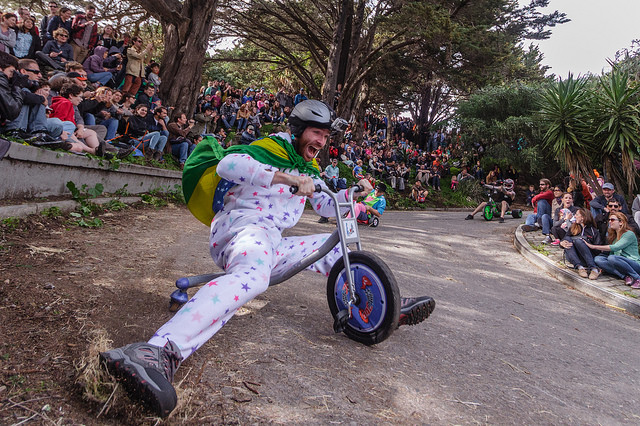 To that end, you can support the Bring Your Own Big Wheel by making a donation to their PayPal account to keep the event running smoothly for another year. The races, however, do not run smoothly. They are no longer organized into heats, but instead a two-hour mishmash of madcap Big Wheel stupidity and spectacular, agony of defeat somersault wipeouts “The only organization is to not run into each other,” one racer said.

Previously: 11 Photos Of The 15th Annual Bring Your Own Big Wheel

A plan to thwart backups on the Golden Gate Bridge backfired this weekend, as a closure of the bridge's two parking lots ended up reportedly causing even more gridlock than before. As reported

San Francisco's commitment to eliminating traffic fatalities by 2024, known as Vision Zero, is this year off to a tragic start. Adopted in 2014, the two-year-old initiative seeks to educate the public on

—
Bring Your Own Big Wheel Race Once Again Brings Thrills, Chills, and Spills To Potrero Hill
Share this