These Easter Bunny Love Lollipops can be found in the Easter candy section (!) at Rainbow Grocery as well as at Dark Garden on Linden Street, Scarlet Sage Herb Co. on Valencia Street, EO Exchange in Mill Valley, and in the aphrodisiac lollipop section of local confectioner Pandora’s Pops’ website. 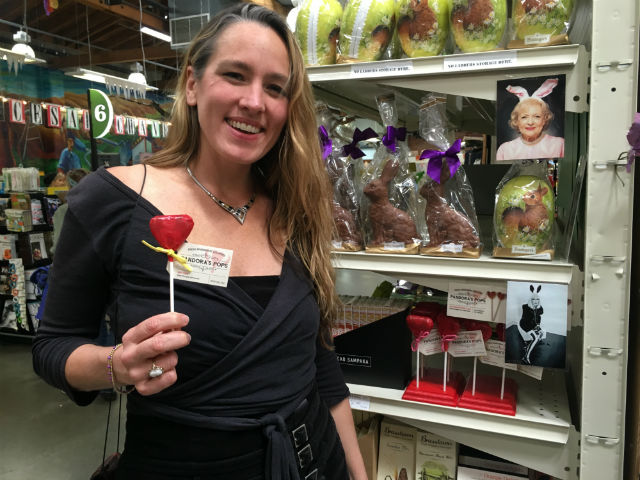 “There are five aphrodisiac herbs,” Pandora’s Pops CEO and founder Jena Chambers told SFist, describing the organic cocktail of sexy stimulants in her hard candy offerings. “They’re also flavored with essential oils that are warming, or opening, or both.” The candymaker offers other sexytime lollipops with names like Fifty Shades of Earl Gray, Hot Yoga, and a “stiff and refreshing” Gin & Tonic. “We also have a number of other pops that are not aphrodisiac,” she said. “They include Calming Pops, Happy Genius Pops and Smoke-Stop Pops that help people quit smoking tobacco.”

But of course I was most intrigued by the aphrodisiac Easter Bunny Love Lollipops, a confection sure to get the local archdiocese’s vestments in a bunch. So I declared a date night, asked out my current reigning crush, and we each sucked off an aphrodisiac lollipop. Sure enough, I started getting inappropriately frisky.

So I lean in and start and start kissing her on the head. But my mouth is all sticky from just having a lollipop, and suddenly I’ve got a bunch of her hairs in mouth. Normally having a sticky mouth and hairs between my teeth is the sign of a successful date! But this was in a completely different context.

I ask my date if she was feeling the aphrodisiac. “Not really,” she said. “I think the two drinks did more.” 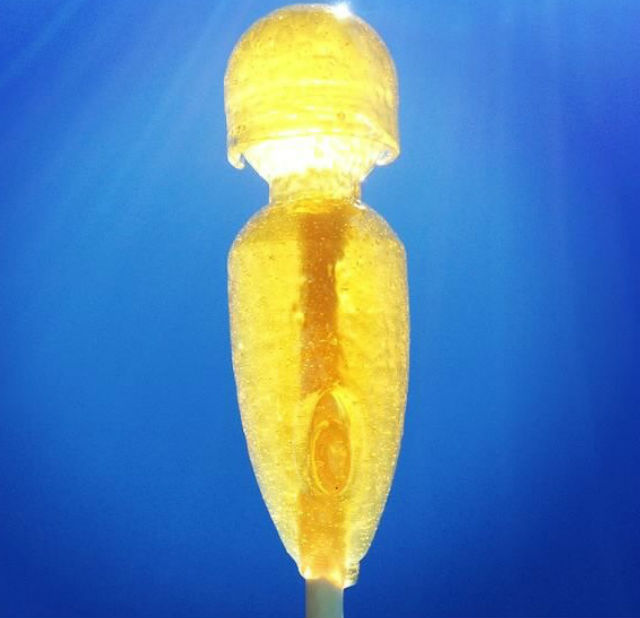 In addition to the above-mentioned lollipops, Pandora’s Pops is putting the finishing touches on a soon-to-be-released aphrodisiac pop seen above, based on the Hitachi Magic Wand. “Recently I sampled the Magic Wand pop,” said Dixie De La Tour of Bawdy Storytelling, happening tonight at the JCCSF. “But this one is shaped like a Magic Wand and tastes like strawberry. It’s all natural, organic and yummy. It’s the sexiest pop that Pandora’s Pops has ever made.” I'll plug that in and give it a try once it becomes available.