Stories about sketchiness surrounding the owners of Farina, that fancy looking but many would say over-priced Italian spot on 18th Street, go back quite a few years now. Back in 2011, several employees sounded alarm bells around owner Lucca Minna's pay structure at the time in which the restaurant was, seemingly illegally, pocketing all servers tips, paying them minimum wage, and then paying each an "extra salary" based on their position. This was on top of some egregious menu prices, which included a 4 percent "cover charge" for bread and water and $26 for a plate of handkerchief pasta with pesto  both of which Michael Bauer called out in a one-and-a-half star review that year. Fast forward to 2016, and as Mission Local reports, multiple employees have won successful court judgements for wages owed them against Farina Focaccia LLC, the company that originally owned Farina and its sister restaurant down the street, Farina Pizza. But good luck collecting any of that money now that the restaurant is under new ownership  though the new LLC may very well include the same people in the original LLC, simply under a new name.

A manager at the 18th Street restaurant told Mission Local that all the stuff about court judgements are a "misunderstanding," and Farina is no longer connected to Farina Focaccia LLC  they're now owned by a company called Global Trading & Marketing. That's awfully convenient, however, given that Farina Focaccia LLC owes some $335,000 in unpaid invoices to vendors and back wages to former employees. One of those employees, Sandra Valmana, talks of getting paid months late, and getting paid repeatedly with checks that bounced.

And what restaurant undergoes a change in ownership despite having a sister restaurant down the street, and neither of them changes their menus or website one iota?

Another former employee, janitor Gustavo Palma, an immigrant from Guatemala, can be seen in the photo below protesting near the restaurant on 18th Street on February 23  the photo was sent to SFist via a tipster at the time who spoke to Palma, who does not speak much English, but says he's owed $1200 for cleaning both of Farina's restaurants. He's currently homeless and living in a shelter. 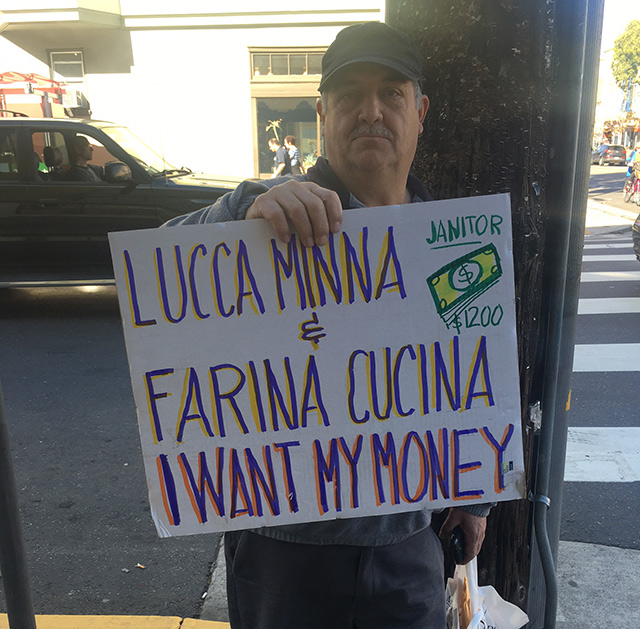 Collections from Farina have gotten so bad, in fact, that the Sheriff's Department has had to send a person to sit by the cash register and take money as it comes in  and this is to pay vendors and things like $30,000 in parking taxes owed by both the new and old LLCs to the city. Collections for debts to the employees could be near impossible, according to attorney Greg Groeneveld, who tells Mission Local it gets even harder if the LLC named in court documents doesn't have a bank account attached to it anymore.

Remarkably, Farina has stayed in business five years since I wrote the headline for Grub Street, "Is Farina Circling the Drain? They’re Now Keeping Employees’ Tips." Of course, service charges are now becoming more common, with gratuities now being shared with the front and back of house out of economic necessity. But how many dozens of vendors and employees do you have to (allegedly) screw over before you have to declare bankruptcy?

Updates as warranted, and let's hope Mr. Palma gets his money.

When Donna Davis looked in the mirror, she saw that her skin had turned yellow. As KQED tells her story from 2014, Davis, fell ill after enjoying a "delicious" soup she cooked from