We got early word this past weekend that the expected opening of chef Jonathan Waxman's first SF outpost, originally named Brezza Emporio and Pizzeria but rechristened as simply Waxman's, is due to happen tomorrow, Tuesday, March 22. The much anticipated Ghirardelli Square project  certain to be one of the biggest openings of the year  marks a homecoming for Waxman, who was born and raised in Berkeley and cut his teeth in the kitchen at Chez Panisse in its early days (replacing Jeremiah Tower after his departure in 1978) before moving to New York to make his name there  most recently with the much acclaimed and beloved Barbuto.

The menu at Waxman's, which you can see below, will change often based on seasonal ingredients and will feature pastas, antipasti, and Italian fare much like what's found at his Atlanta outpost, Brezza Cucina, which opened last October  and a starring item will be Waxman's signature roast chicken with salsa verde.

Also, this is a pretty huge project, with a 120-seat Café portion on one side, and a 120-seat restaurant on the other, with an additional 100 seats on an outdoor patio. The Café will open a bit later, after the restaurant ramps up.

Waxman told Hoodline earlier this month via Marin-based partner Howard Greenstone that they decided on the name change because the Atlanta name "never really rolled off our tongues." Also, Greenstone said that Waxman is "deeply committed to this restaurant" and this homecoming is "deeply personal" for him.

Update: In an official release, Chef Waxman says, "When I was growing up, Ghirardelli Square was one of the quintessential meeting places for San Franciscans... After introducing California cuisine to New York City, I am humbled to come back to my home state and be part of the revitalization of Ghirardelli Square." See the full menu below.

Waxman has been widely praised for his "casually hip" food and effortless style  and during a stint on Top Chef Masters Season 2, in 2010, he earned the nickname "the Jedi chef" for the seeming effortlessness and calm with which he pulled out perfectly executed plates.

Also it should be noted that unlike many of his celebrity chef peers, Waxman has never been too interested in disseminating his brand far and wide or getting spread too thin. In addition to Barbuto, which remains in danger of an imminent closure at the landlord's hands, Waxman also owns and operates Jams, which opened last year at One Central Park, and Atlanta's Brezza Cucina. 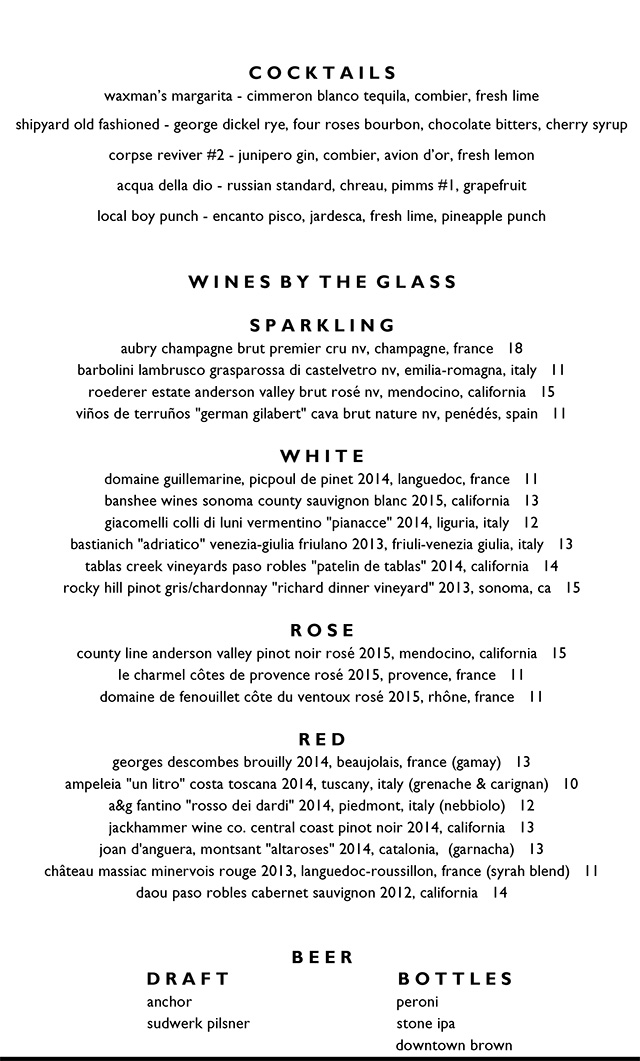 San Jose-based Coding Dojo wasn't supposed to be a school at all. As CEO Richard Wang explained to SFist last fall, the private postsecondary school's founder, Michael Choi, was managing several startups including

A Fisherman's Wharf shopkeeper was left beaten and pepper sprayed Saturday, after he tried to stop a salami thief from absconding with the sausage. According to the San Francisco Police Department, the crime