Hayward-based artist Andrew Kong Knight was painting a portrait of Donald Trump (née Drumpf) when he decided to add a little something extra: actual bull manure he found in the Hayward hills. Kong Knight added it, spewing out of the Donald's mouth, to what previously was a portrait of him making a Nazi salute with one hand and holding a stack of money in the other, with his mouth, in signature fashion, agape and mid-sentence.

"This is my message to the world that I don’t support this hateful man," Kong Knight tells CBS 5, adding, "If people are offended by this, that’s good because I’m painting just what is going out there. It’s just a reflection of what’s going on."

As he said in a statement also to ABC 7, "It was one of the toughest projects I've worked on since I had to stare in the face of hate and ignorance the whole time and also collect actual bullshit to use in the piece."

Kong Knight explains that he added glue to the manure to help it not to smell, and to stay put. He hopes to show the piece in galleries, and it's unclear if it's yet for sale.

Below, a version of the portrait that he posted to Facebook last week, prior to the addition of the bullshit. 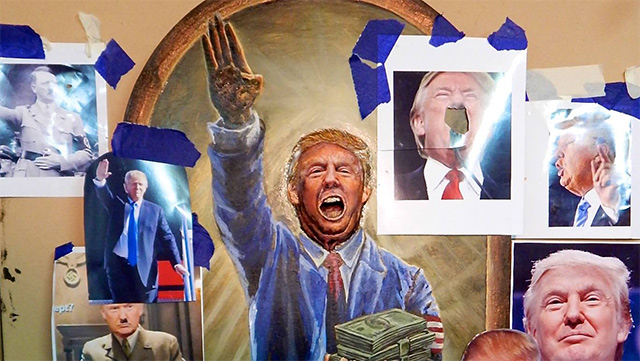 The year is off to a slow start in Oakland, and in this case that's a very good thing. The city is experiencing a drop in violent crimes the likes of which it

This week in marijuana news, as the state slides toward the inevitable full-scale legalization of cannabis as soon as next year, and a month after California just hired its first "marijuana czar" to