The time has come, everyone, and the stakes are high for the long-delayed, much discussed, hotly anticipated opening day of Wise Sons Bagel & Bakery (1520 Fillmore Street near Geary).

Not being a habitual line-stander or morning person, I really had to push myself  like I would for an early-morning gym trip, though far less healthy  to get over to the bagelry for their debut morning service today. Thankfully, the line just before the doors opened at 7 a.m. was not too bad  but you can expect that to change by Saturday, since we do, bizarrely, seem to have a surplus of early risers in this town. 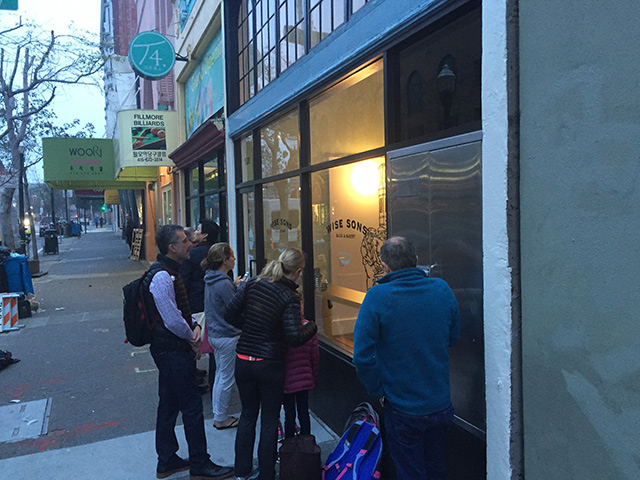 Inside, the ordering process was fairly swift  with just about eight people ahead of me, the whole thing took about 15 minutes  though pent-up demand and the newness of the options means people are going to have some complicated orders, and may be ordering bagel sandwiches for eight of their friends who didn't bother to get up that early. 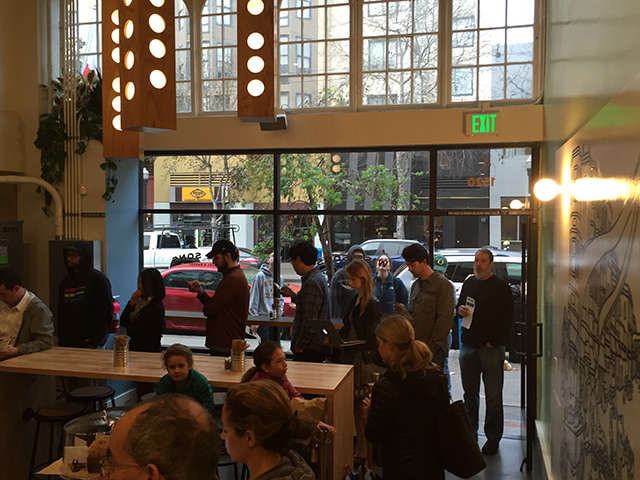 There is one communal table with some stools where I can promise it will be fairly unpleasant to sit for the foreseeable future as the line snakes around and customers hover waiting for their bagels and shmears.

As for bagel types, the list is succinct for now: plain, salt, sesame, poppy, everything, and they have their bialys too.

On those you can simple butter or house preserves, or a classic shmear of house cream cheese. I had the smoked salmon shmear ($4.50) which was generous, on an everything bagel, as well as an egg and cheese with breakfast sausage on a sesame bagel ($10). 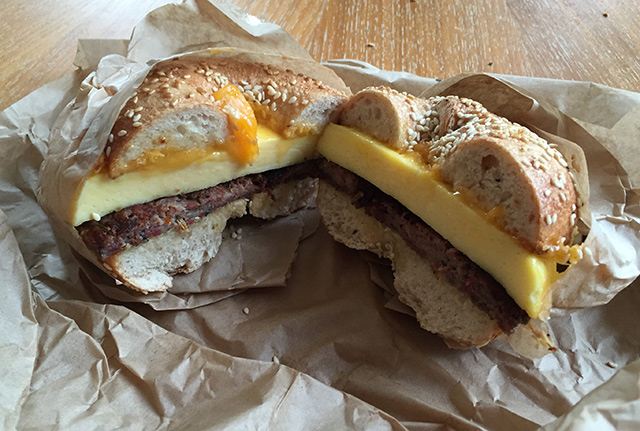 The 2-minute review: The bagels themselves are certainly good and fairly flavorful. They've got a decent heft and a texture balance that's equal parts chewy, crisp, and dense  though thankfully not as exhaustively chewy as a New York-style simulacrum I had from Kenny & Zuke's in Portland recently, after which my jaw needed an hour's rest. They're certainly close to New York bagels of my memory, a little smaller though similar to how I remember H&H, for those for whom that means anything  and definitely more authentic, consistency-wise, than most bagels I've encountered in the Bay Area.

The smoked salmon shmear is delicious and just salty enough. The egg-and-cheese is good primarily for that "pastrami" breakfast sausage, which is highly spiced and seasoned, heavy on the fennel, and all beef though you won't miss the pork. The egg frittata on it is pre-made but not rubbery, and they could probably use a heavier hand on the aioli, which I barely noticed.

The drip coffee, from Intelligentsia, was well brewed and fruity, and lattes and cappuccinos are available too.

Only real complaint: By the time my everything bagel had been toasted and manhandled, most of all the topping had come off it, meaning it was almost like a plain bagel with hints of salt and onion.

Other shmears, which can also be purchased by the half-pint or pint from a small refrigerator case, include scallion, cheddar (like pimiento cheese), house hummus, smashed avocado, and Al Fieri organic almond butter.

The sandwich options are as follows:

I would plan to get there early regardless for the first few weeks, as word gets around and bagel-ravenous San Franciscans begin flocking  there's more than a good chance they'll run out of bagels well before their stated closing time of 3 p.m., at least at the beginning.

Liverpool Lil's: 1973 - 2015, when the Marina pub well known for spirited food, drinks, and atmosphere suffered fire damage from which management now reports Lil's won't be able to recover. The landlord

—
I Got In Line And Tried Wise Sons Bagel, And It's Good
Share this