After a day spent frolicking in the Panhandle, posing in Alamo Square Park, and driving aimlessly back and forth over the Golden Gate Bridge in a red convertible, I settled down to watch the pilot episode of Fuller House on Netflix.

Its basis, the 192-episode ABC sitcom Full House, which aired from 1987 to 1995, didn't get a proper finale as it was basically just canceled, and the first episode of Fuller House seeks to belatedly offer one. Alongside the new female-led cast, the show's first offering heavily features the three patriarchs of the original house, giving them the vanity-project exit they — or at least now-producer John Stamos — were pretty transparently after. After that, the main narrative purpose of this first episode is to establish the show's plot, an echo of the original.

Absence, almost in the form of a curse, haunts the show's Tanner family. Just as Danny Tanner (Bob Saget) was widowed when his wife died in a car accident, forming the backstory of the original show, so, too, tragedy has struck his now adult daughter DJ (Candace Cameron). Her firefighter husband died on the job, leaving her to raise three boys as a single mother. 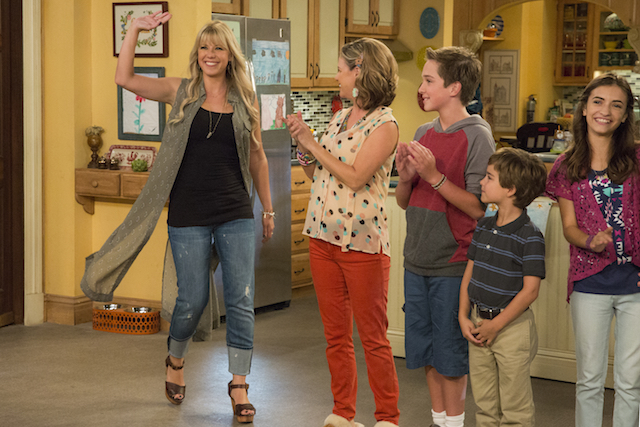 Oh yeah, the third Tanner sister, Michelle (Mary-Kate and Ashley Olsen)? She's "busy in New York running her fashion empire" — a line during which all actors break the fourth wall, mugging for the camera as the laugh track roars.

True to sitcom form, Fuller House so far is a seemingly uninterrupted series of entrances, gags played to a knowing, presumably adoring audience. And since all the show's characters have been off-screen for some time — in a bit of faulty math, the interval is placed at 29 years — the canned applause is raucous because it's been held for so long.

Tending to her youngest son in his room, sick with an ear infection, DJ is heard by her family downstairs over the baby monitor. "Everyone's leaving," she says, starting to break down, "and for the first time we're gonna be on our own. I just don't know if I can deal with all of this."

When she greets her family, unaware she's been overheard and forcing a smile, Stephanie and Kimmy offer to move in with her and help, while Danny promises not to sell the house. Acknowledging the time lapse and nodding to San Francisco real-estate prices, Jesse adds "Do you know how much this house is worth now?"

"Whatever happened to predictability? / The milk man, the paper boy, evening TV?" Nostalgia is the key of the Full House theme song, which is now sung by Carly Rae Jepsen, and like its predecessor, the new Netflix show relies on a central loss and longing for family. By that logic, Fuller House is nostalgic for nostalgia, making the show almost an experiment in the form. The results of that experiment aren't in just yet.

So far what's striking in Fuller House is an almost Danny-level anxiousness for precise parity, a perfect reconstruction of the original show from new or salvaged parts. Even the Tanner family's golden retriever, or that dog's progeny, is having puppies, and DJ decides to keep one. 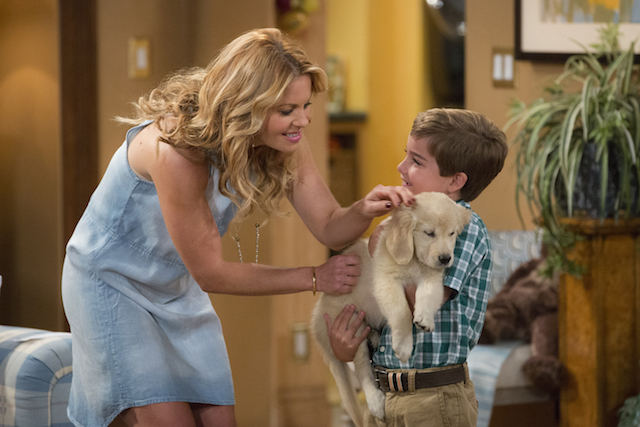 Personally, revisiting the Tanner clan more than twenty years later in San Francisco — a strange, sunny place whose vague contours it helped shape for me — either took those years off my life, added them back, or maybe more accurately, helped register their passage. The show's best jokes acknowledge that lapse we've all experienced. At a going away party for Danny and Jesse, who are headed to Los Angeles to pursue their television and music careers, Stephanie, now a musician by the stage name DJ Tanner (get it?) announces "Let's take this back to the late 80s when this whole party got started!" (get it?)

When Danny mocks a joke of Joey's — "That never gets old" — he means, of course, that it does, and it has, but that there's maybe a joke to be made about the joke still. We'll have to see in the coming episodes, all available to stream at once, which I'll watch this weekend and about which I'll report back. Wish me luck.

All SFist coverage of Fuller House

Here's one way to make your expensive SoMa rental a lot less expensive: Fill it with three more people and charge them $1,350 apiece! This particular Craigslist ad caught my eye because

—
'Fuller House,' Fuller Of Loss, Debuts On Netflix
Share this