One of those "micro unit" buildings we've heard so much about has been completed at 388 Fulton Street (at Gough), and one of its itty bitty, 350-square-foot studios could be yours starting at $500,000. The catch is the building has no parking  well, it has bicycle parking included for every unit. (A basement garage will be used by the Boys & Girls Club of San Francisco’s Don Fisher Clubhouse for their vans, only, as Curbed reports.)

Also, of the 69 units in the building, some of which will have fine views of the City Hall dome, probably only a few lower-floor ones will go for that bargain price. There are also six 485-square-foot one-bedroom units, and 28 743-square-foot two-bedroom units, with the latter getting priced in the "high $800,000" range.

Since many San Franciscans are, voluntarily, car-free, the lack of parking may not be a sticking point for too many buyers, but it probably will be for some! As Curbed quips, "finding street parking on Fulton is roughly equivalent to rolling double zeroes on a roulette wheel," so car owners deciding to move here are probably better off ditching those autos anyway. 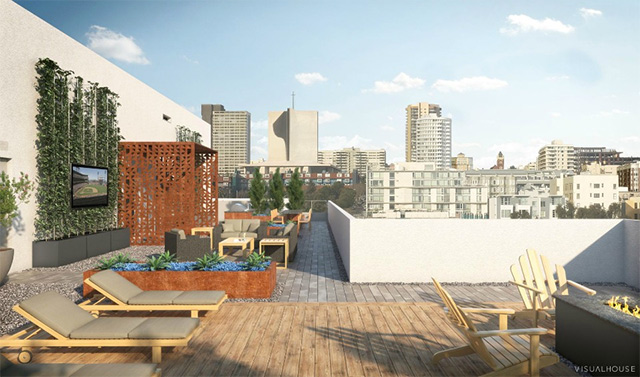 Following the opening of 388 Fulton, in the coming years we'll be seeing some 370-square-foot units coming online nearby at 300 Octavia, some 270-square-foot studios at Page and Lily, and some even tinier  much tinier  live-in closets clocking in at 174 square feet on Octavia between Oak and Lily in a "co-living" development called The Karl.

Try not to bump into any walls while putting on your pants!

You can sign up here for more info once the units hit the market, which will reportedly be within days.

There is fine looking roof deck, though!

A man walking down Market Street had a scary encounter this morning, when a gang of miscreants chased him down and stole his stuff. According to the San Francisco Police Department, a 32-year-old