In order to prepare myself to drink a $15 cup of coffee — 8 ounces of fair-trade pour-over from Equator on Market Street — I brushed my teeth, bathed in oil, confessed my sins, and got on BART.

Right after SFist posted yesterday that a $15 Cup Of Coffee Will Make You Spit Out Your Coffee, several journalistic pleasure seekers such as myself were on the case. BuzzFeed came at the subject with a series of GIFS, pronouncing the coffee "Better than a Keurig."

Meanwhile, SF Weekly wrote that **actually** the $15 price made sense given the beans, an inaugural harvest from Equator's own high-altitude farm in Panama, Finca Sophia, which has been in development for eight years.

Based on these accounts, I knew that I would not be poisoned. But I needed to make up my own mind and to try this potential ambrosia for myself.

At Equator, several customers were asking about the $15 coffee sign, mostly demanding an explanation for the crazy per-cup price. Akaash Saini, a representative of the company who engages in pour-over competitions, was happy to oblige.

"We're not making much money off of this at all," he told SFist. In fact, selling under 20 cups a day and running out quickly (though now with supplies for the next two weeks), Equator's not even breaking even. 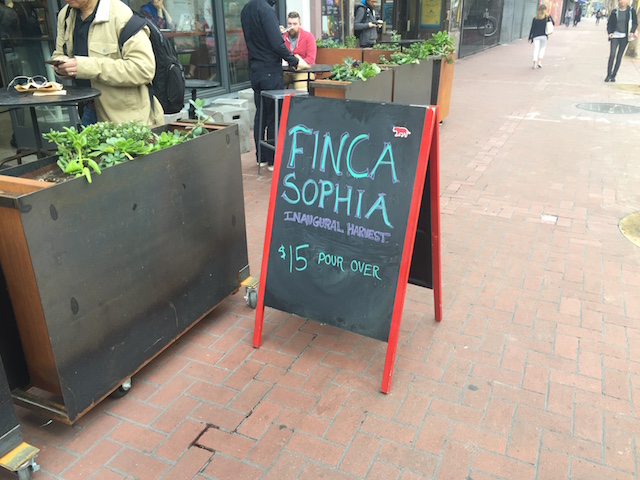 That's because, as Saini tells it, the farmers at Finca Sophia are well compensated, their medical bills and children's education all paid for. In his words, the farmers are "coworkers" — a refreshing viewpoint in an often exploitative industry.

Later, after tasting their excellent work, I have come to think of them as family, the kind to whom I would willingly donate an organ. At the risk of being one of those insufferable San Francisco connoisseurs of everything edible and drinkable, I'm just here to tell you it is damn, damn good, even if the price seems utterly absurd and decadent, and maybe is.

Honoring the coffee farmers in his way, Saini spent time and effort carefully measuring water and coffee, waiting on me like a VIP guest. He didn't provide exact tasting notes, but what I noticed for myself was a light, smooth coffee that kinda changed my life, waking me as if for the first time from a slumber I have only known, a dream of cheap coffee that is just that and nothing more. Not only did this coffee not kill me, but now I fear I may never die.

Sour without becoming bitter, it also bested others I've enjoyed at Four Barrel and Intelligentsia. It was light but earthy, a bit spicy, and smelling it, you might have thought you were about to drink chai.

I've done a lot of thinking since I had my coffee this morning, and I don't think I can go back to who I was before. That's right. I think I'm going into finance.

Previously: $15 Cup Of Coffee Will Make You Spit Out Your Coffee

San Francisco-based designer Lehu Zhang attracted the Huffington Post's shocked attention yesterday afternoon with the above poster, devoted to the Chinese Zodiac sign for this year. "It looks like a penis penetrating where

The much ballyhooed “low-threshold" homeless shelter on Pier 80 is finally up and running, and with the recent addition of toilets and showers, city officials expect San Francisco's homeless to make their way