When SFist reader Matt Scully spotted this Department of Homeland Security device at New Montgomery and Mission, he had some questions. Is this thing — whatever it is — Super Bowl related? Is it a bomb sniffer? A radiation detector? Something else?

All great queries, to which I will add, how important can it be if it can easily be unplugged (and if it needs to run non-stop, why not get a battery or a generator)? And, hey, can I charge my phone there? Plug in my curling iron? 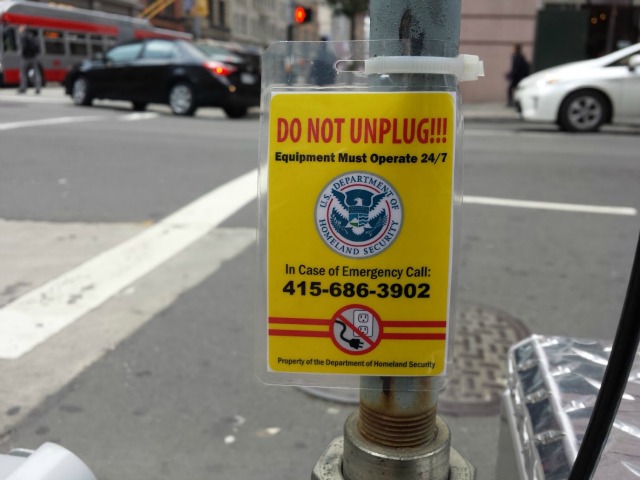 So, I started by calling San Francisco's local Department of Homeland Security bureau, which referred me to "Washington D.C. — there are about 20 sub-divisions of Homeland Security it might belong to, and each one has their own media person." OK! So I went to this page, and went down the line, calling every single department listed, talking to folks, and leaving voice mails.

Three hours later, I have exactly nothing to report. No one knew (or was saying) what these devices are. And then I looked at Matt's email to SFist again. Matt Scully, huh? Like Dana Scully, of The X-Files? Which is, in its new season (SPOILER) arguing that there wasn't a cover-up of alien activity on earth after all, and that all the alien abduction/experimentation during the show's earlier run was actually a government conspiracy hidden behind alien guff. Is this some aspiring Deep Throat's way of tipping us off to some nefarious Illuminati plot in our in our fair city? WHAT IS GOING ON GUYS?

Anyway, after placing more concurrent phone calls than I've made in ages, I am none the wiser. Is the truth out there? Reddit suggests it's an air sampler, but, you know, if I were trying to plant misinformation Reddit would probably be my first stop. Anyway! If you know what these things are, drop me a line, comment, or just send me a message in a pack of Morleys.

Following years of dismal winter dustings for the Sierra Nevada Mountains, this season's El Niño has lifted snowpack to 115 percent of normal (the historical average for a particular date) according to the

In a disturbing police body-cam video obtained by the Contra Costa Times this week, we witness the final moments of the life of 51-year-old Hernan Jaramillo play out in what has become a

—
Good Luck Figuring Out What These Department Of Homeland Security Devices On SF Streets Are!
Share this