Astute commenters on yesterday's post on Embarcadero Center's Super Bowl wrap fail wondered if such displays violated San Francisco's advertising regulations, and/or if the building owners could be fined for the vast billboards. But as with everything else about the Super Bowl, you'll be SOOOO SURPRISED to hear that it's unlikely that anyone will face fines — and that even permitted display advertising for the event didn't have to pay the usual local fees.

No new general advertising signs shall be permitted at any location within the City as of March 5, 2002, except as provided in Subsection (b) of this ordinance Subsection B just applies to signs on motor vehicles and ones "in the public right of way" only. Section 610 says they should be paying $2.5k/day to the city for violations.

Additionally, Section 604 says they would need a building permit to do this. For the address 4 Embarcadero Center, no permit at all related to external signage/billboards/advertisements has been made in 2015 or 2016. 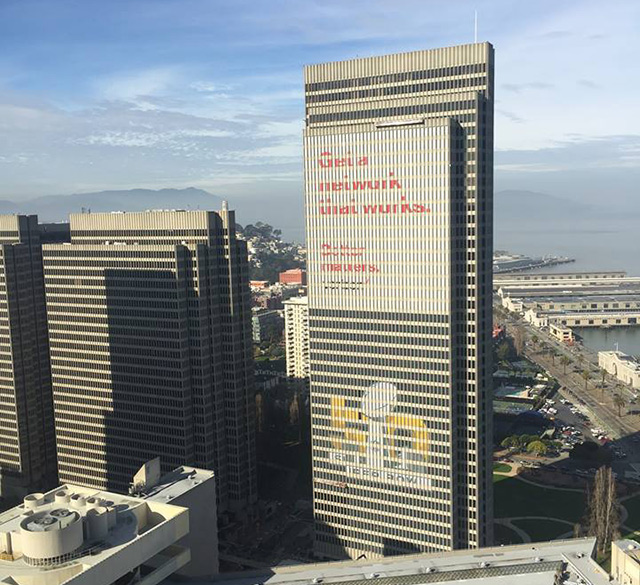 It's not just SFist commenters who are noting the possible violation. According to Hoodline, the (as of yesterday, off-kilter) giant ad wrap on Embarcadero Center 4 and another 20-story Super Bowl ad on the Hilton Union Square got the attention of area activist Jamie Whitaker, who said that "the buildings that attach these extremely large illegal advertisements to their buildings are counting on the Planning Department to be negligent in their enforcement role. I hope Planning proves them wrong, and immediately enforces the Planning Code and charges penalties allowed by San Francisco law."

Whitaker had better prepare for disappointment, though, as a spokesperson with Planning told Hoodline that "it is a Super Bowl sponsor sign ... they got the green light from the Mayor's Office, as [the ads] are temporary, and connected to a civic celebration."

"You will most likely see more of these Super Bowl signs, but again, they are temporary," Planning spokesperson Gina Simi said.

"Even if we did enforce, due process would allow them to stay up for 30 days. They are expected to be removed in a timely manner after February 7th."

And the skyscraper wraps aren't the only Super Bowl advertising that doesn't have to follow the laws of the land! You know those 1,600-pound, light-up, "50" signs that people keep vandalizing with graffiti like "Evict Ed Lee"?

Well, while Hoodline reports that the NFL and the Super Bowl Host Committee did get permits for all four of the displays, they didn't pay any of the four $1125 application fees each "minor encroachment" permit would cost pretty much anyone else.

"The permit fees were waived as this is part of the civic celebration," a Rec and Parks spokesperson said. Hmm, maybe when the Board of Supes demand that City Hall renegotiate the event's costs with the NFL, they should remind them that the first step in negotiations is "don't give away the whole goddamn farm."

Beer Wee begins with a roar tomorrow, the 22nd, and likely ends with you whimpering next weekend on the 31st. So, what's your plan? The question is always difficult, and it's made more