The tenth edition of the famed, invitation-only Mavericks surf competition, now dubbed Titans of Mavericks, will most definitely happen during this stormy El Nino winter, it's just a matter of when as organizers closely watch the swells arriving off the coast of Half Moon Bay. The competition doesn't happen every year and is dependent on the way the waves shape up  there hasn't been one since 2014, given how quiet and dry a winter we had last year. But as organizers presaged via Instagram last week, and as the Chronicle reports, waves have been hitting 50 feet at Mavericks this week and seasoned big-wave surfers are already out there practicing on them. Though the gnarly factor is, reportedly, very high.

In fact, as the Chron reported this morning, one surfer has already been injured.

Garrrett “GMAC” McNamara, 48, wiped out massively on Thursday and had to undergo emergency surgery, from which he's now recovering.

The big waves occur around a break that's two miles off the Northern California coast at Pillar Point, and they form during the rough winter season due to a unique geological formation under the water  a ramp that slopes upwards on the ocean floor and creates unusually massive waves at this spot that can be as high as 80 feet, in a V- or U-formation. 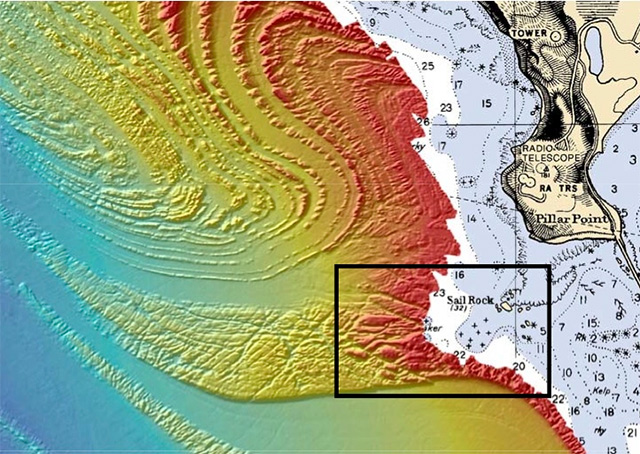 The contest was founded long before Apple named an operating system update after it, back in 1999, though professional surfers had been making pilgrimages to the break since the mid-90s  locals had known about it, and surfed it, as early as the 1960s, but the prevailing wisdom for decades was that California didn't have any big waves. Each year organizers plan for it between November and March, and the competition only gets called when the swells are deemed perfect. Thus it's only happened nine times over 16 years. 24 surfers are invited to participate, and the last winner in 2014 was South African surfer Grant Baker who had previously won in 2006.

The one-day competition gets called with only 24 to 48 hours notice, in which competitors fly in from wherever they may be around the globe, and fans rush to watch. Like last time, it should be broadcast on a big screen at AT&T Park when it happens.

Two people have died surfing Mavericks: Mark Foo in 1994, and Sion Milosky, an accomplished big-wave surfer who drowned after a two-wave hold down in 2011, during a year when no contest was held.

Keep an eye on 725 Harrison, where a cool looking new office complex that we talked about last fall may soon be on the rise. As Socketsite writes, the complex that would occupy

Last week was pretty quiet, all told, as everyone got into the New Year's Eve spirit, and this week brought news of the opening of Black Bark BBQ, coming next week in the

—
Mavericks Waves Hit 50 Feet, Surf Competition Could Be Called Any Day
Share this