For Oakland's Debbie Viess, all mushrooms are a bit magical. "They're ephemeral," the co-founder of the Bay Area Mycological Society tells SFist. "Of course you can walk in the woods most of the year, and you see trees, birds, a lizard, a frog. But you don't see the mushrooms. Then it starts to rain, and it's magic."

Wet winter weather has summoned fungi to tree and field, and with them come mycology enthusiasts. "You never know what you're going to see," Viess glows, "we see strange manifestations — mushrooms take different forms even within a species — and as a bonus you can eat some of them." Think chanterelles and black trumpets run riot, which due to drought conditions had previously been slim pickings.

Just yesterday at Point Reyes, a preferred environment for both groups, Viess and her husband, society co-founder David Rust, led 200 participants in lectures and foraging forays. The occasion: The 11th annual Fungus Fair, which this year has swollen and spread in size like some sort of, well, you get the idea. 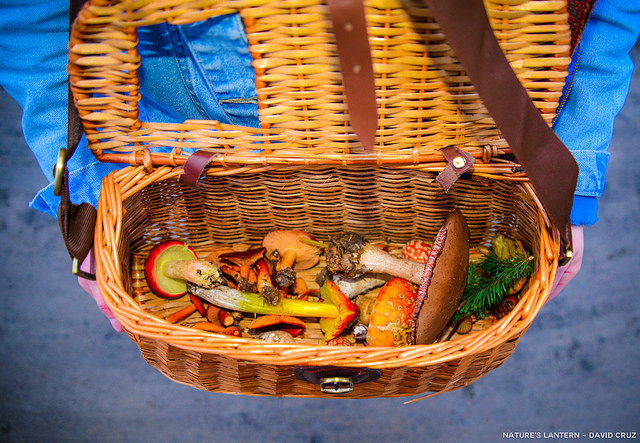 Roughly an hour from the Society's East Bay roots, Point Reyes National Seashore is something of a mycological mecca. They're "really pro-fungi," Viess explains, providing some of the most generous collecting policies of any of National Park. By contrast, "mostly the regulations around collecting mushrooms in California are insanely strict," she observes.

Foragers can gather two gallons of mushrooms per trip, with one bonus mushroom. That quirky rule is the legacy of the late Larry Stickney, a San Francisco mycologist whom Viess calls "a looming figure in our world." The logic is a mushroom gatherer might encounter one specimen on the way out of the park and find themselves unable to pass it over. There's no commercial hunting allowed, Viess emphasizes, but "that doesn't mean people aren't poaching," she says, "which is not cool." 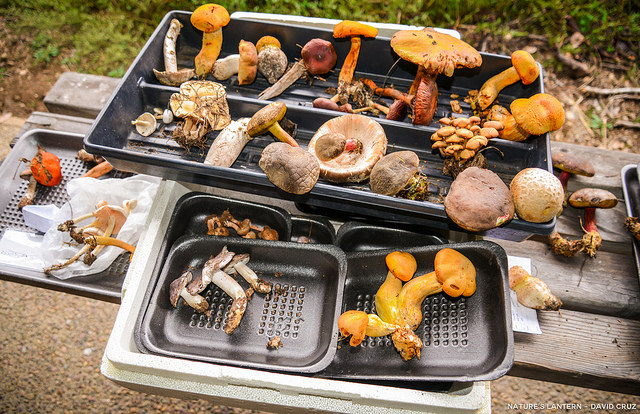 Though the cohort collected "a mountain" of mushrooms thanks to recent rain, "we're really not out of the woods yet," Viess, who is given to natural metaphor, was quick to add. "The trees have been super stressed, and most of the mushrooms that people are concerned about are edible species that are symbiotic with trees." Chanterelles, for example are partial to Oaks, and so on.

"If the trees suffer, those mushrooms suffer too. Even though we have finally had some good rains, the whole ecosystem is still catching up." That unsettles Viess as well. "People are stressed... we're all part of the same system," she sagely observes. "We can't separate ourselves." On the bright side: As the Examiner reports, rain is expected throughout the week in the Bay Area, with CBS 5 calling for up to 5 inches of precipitation. 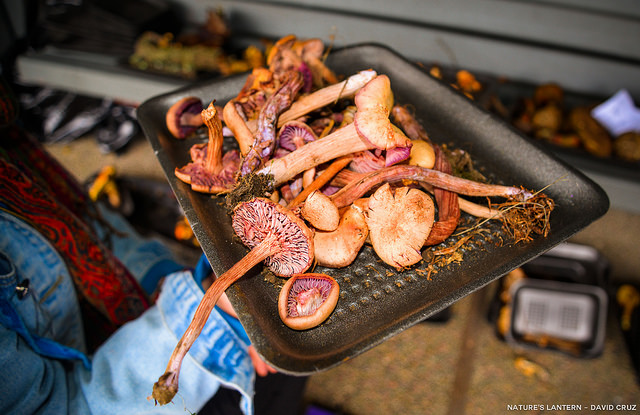 The Bay Area Mycological Society can vouch for around 550 different species of the fungi in Point Reyes alone, but one, the edible amanita velosa, Viess identifies as her favorite. Be warned, though: "It could be easily mistaken for the deadly amanitas," so she counsels caution. "It's just something you have to learn how to do, you don't just get behind the wheel of a jet plane and take off without training."

Who could have seen this going so terribly, terribly wrong? An Oakland couple rented their home via Airbnb for New Year's Eve to someone they thought was a middle-aged man from Chicago, only