Self-described "internet sensation" Grumpy Cat has been charming computer users with her signature pout since 2012, but now you have one more place to view her cranky visage: An animatronic version of the four-legged meme machine is now on display at San Francisco's Madame Tussauds.

The kitty, whose real name is "Tardar Sauce" (far more dignified than "Grumpy Cat," I think we can all agree) was in San Francisco Tuesday for the unveiling, during which she posed for the above and below photos.

According to the press release, "'I can’t believe this is happening,' said Grumpy Cat of her reveal, 'This is absolutely awful.'" While this is clearly silly, as a cat who can actually speak would be imprisoned in a lab and studied by scientists in an effort to determine her secret, it is certainly not the silliest quote I have seen in a press release ever (or even this week).

Then again, according to her website, "99% of the time she is a normal kitty." Perhaps she speaks during that other 1%? It's a mystery.

What isn't a mystery is when you can go see the robotic version of the famous feline. SF's Madame Tussauds is open "365 days a year" at their Fisherman’s Wharf location. We look forward to your selfies with the mechanized version of this well-known cat! 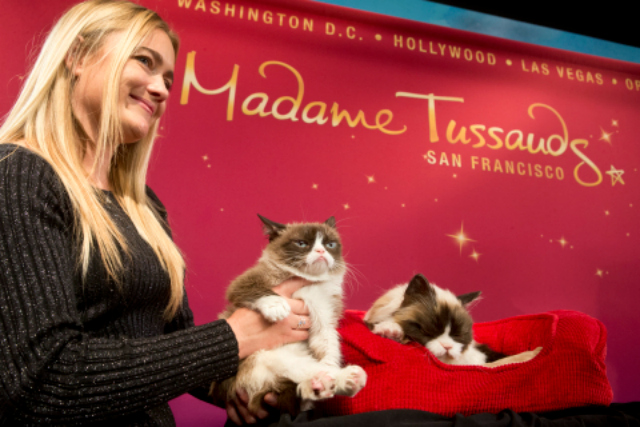 It's not just unicorns that might be overvalued, ladies and gents. Now, more and more housing experts are coming out and affirming what some have been warning all along: we're in a bubble.

We've been following the rumors about what is to become of the grand Hibernia Bank building at Jones and Market for years now. The historic, Beaux-Arts structure from 1892 is one of the