We've been following the rumors about what is to become of the grand Hibernia Bank building at Jones and Market for years now. The historic, Beaux-Arts structure from 1892 is one of the most recognizable things along the Market Street corridor, and one of the most sadly vacant for decades now  a situation that has been difficult to solve given its historic status, limits on how it can be altered, and where it sits at the crackiest foot of one of the crackiest of crack streets in town. But now, once again, the investors who bought the place seven years ago, The Dolmen Property Group, are pushing to lease it again, and they took KTVU inside for an exclusive look at some recent renovations and upgrades that they hope will attract a possible nightclub tenant. 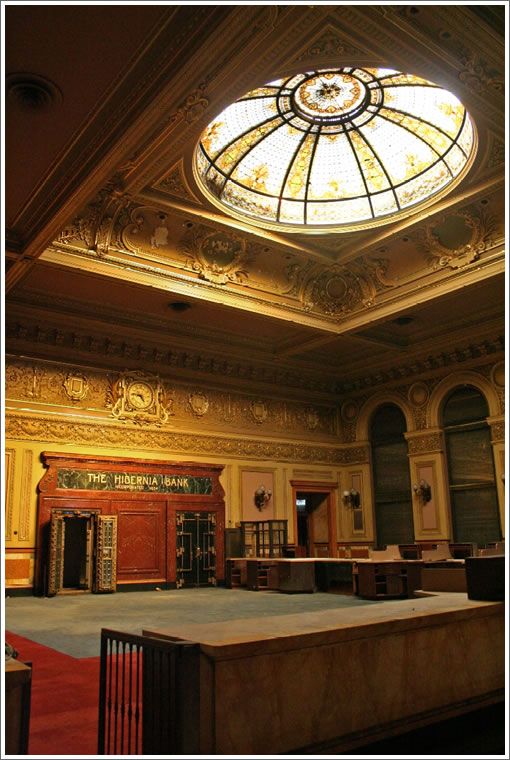 The nightclub idea was floated back in 2014, and in 2012 we heard they were looking for retail tenants, but the process of renovating the place  and, perhaps, a lack of viable interest from viable parties willing to open a business here  has kept it empty all this time.

And nightclub tenants might be smart to wait it out a bit, given all the change that's been slowly coming to this notoriously sketchy pocket of the Tenderloin/Mid-Market. Directly across McAllister Street the renovation is ongoing at the Renoir Hotel at the hands of the Kor Group, the same firm responsible for the Viceroy brand and with the rumored help of designer Kelly Wearstler and a rumored, eventual, rooftop bar.

Also happening nearby at the corner of 7th and Market is the long-stalled rehab of The Grant Building, also becoming a hotel property, as well as a nine-story hotel project headed for the former Kaplan's across Market Street. Add to that new condos headed for the property that includes The Hall just down the street, with construction possibly starting next year, and the enormous 950-974 Market mixed-use complex a block away.

In any event, Dolmen and their realtor, Colliers, are pimping the freshly rejuvenated space, complete with red-carpeted executive suites, a raw industrial lower level, and a dramatic main lobby with marble inlays, marble floors, and Tiffany-style stained glass skylights. As Dolmen Group's Seamus Naughten points out, it's very flexible with its zoning, and it could work as retail, office, or entertainment.

Are there any bust-averse tech companies ready to swoop on this? Will Mid-Market get its first world-class nightclub soon? Wait and see.

Previously: Hibernia Bank Building Finally Under Renovation, Rumored To Be Becoming A Nightclub

An old photo of the interior.

Self-described "internet sensation" Grumpy Cat has been charming computer users with her signature pout since 2012, but now you have one more place to view her cranky visage: An animatronic version of the

My Indiana Pacers made a valiant effort last night, but nothing seems able to stop the mighty Golden State warriors, which are now 23-0. [Associated Press] Uber launches food ordering service in Toronto.