In what can only be described as a dubious honor, a big data traffic and transit prediction company has crowned San Francisco's metropolitan area as the US's busiest city for the-day-before-Thanksgiving traffic. "We're number one!" never felt like such a hollow victory.

According to traffic intelligence company INRIX's annual Thanksgiving Traffic Forecast, SF is at the top of this year’s list of worst traffic cities, with the worst time to be on area roads from 2:30-4:30 today, when it is expected to take 44% longer to get somewhere that it usually does.

Here's how they made this prediction: The company says they "analyzed the Thanksgiving holiday periods from 2010 to 2014, traffic trends from major national holiday weekends in 2013 and current traffic trends" and "use[d] a common measure for congestion called the Travel Time Index referred to in our research as a percentage representing the amount of delay drivers can expect on these days due to traffic." So there you go.

INRIX Lead Scientist and Traffic Analyst Greg Hallsworth says that “In order to avoid the most traffic congestion, we advise drivers to leave either before noon or after 6 p.m. on Wednesday,” so I suggest you just Slack your boss this link as you slip out at 11 and let Hallsworth make your case for you.

Here's INRIX's list of America's worst cities to drive in today, with which we can maybe take comfort in the fact that we beat LA? OK, maybe not. 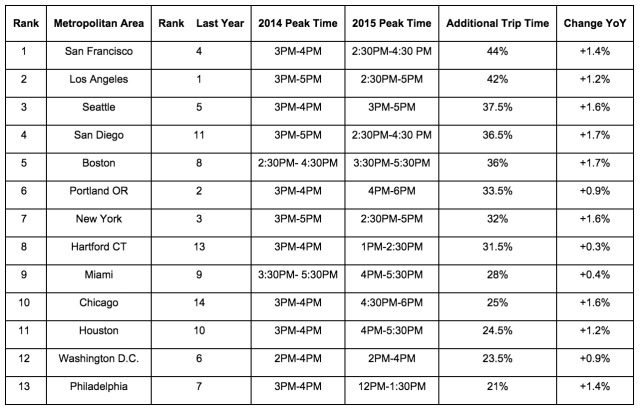 I should have known better from the quotes he gave, but the story of the Australian-Vietnamese man named Phuc Dat Bich being repeatedly banned from Facebook turns out to be a hoax. The

Caleb's dedicated this week's To-Do list to "everybody staying put in San Francisco this Thanksgiving," see you at the Turkey Stroll! [SFist] It looks like the LA Times is killing off its SF

—
San Francisco Will Have America's Worst Traffic Today
Share this