"There’s a joke that I’ve heard passed around the circles of frustrated single men in San Francisco," writes payments startup person Steven Tang in a Medium post he's sure to regret, which has the rather clinical title "How San Francisco’s gender disparity affects the attractiveness pairings of couples."

Don't you want to stop him right there? Sadly, he concludes the joke."They claim that this city is home to 49ers — girls that are 4’s but think they’re 9’s in terms of attractiveness." That quip, you might recall, basically got one tech founder run out of San Francisco, but this town has no memory for that sort of thing. And Tang, seeing some numbers, couldn't help himself. He decided to do the math. Incidentally, he also went at it with a) completely heteronormative assumptions, and b) the basic idea in mind that dating, like the rest of life, is to to be hacked, modeled, or solved.

"If the shortage of women is as bad as the guys lament, then it shouldn’t be surprising that a woman can date a man that’s more attractive than herself. I tried to find out how large that attractiveness difference should be (can 4's reasonably think they should be matched with 9's?), given a few simplifying assumptions about behaviors and distributions that, like any good economic model, may or may not have any resemblance to reality."

What ensues: As if trapped in an episode of a television show about Silicon Valley, Tang spends precious time he could have spent actually talking to girls deciding how different attractiveness distributions might work. Like Tang, I'm making a few reasonable assumptions here, such as: This guy is not seeing anybody. 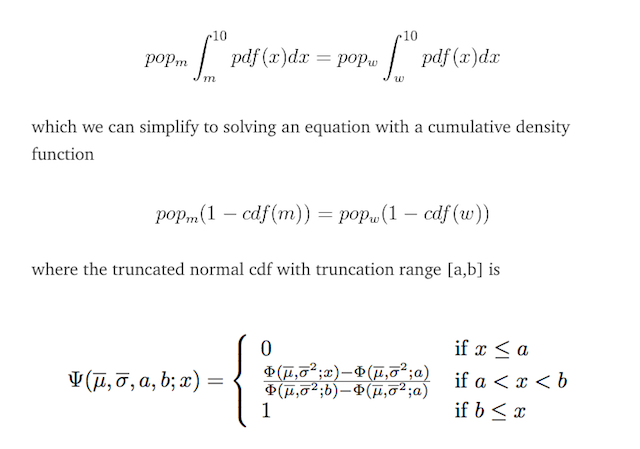 "So what does this all say about 49ers? We can definitively say that girls who are 4's probably don’t think they are 9s, despite the gender disparity in SF singles. In the 20-34 age group, 4's more likely think they’re somewhere around 4.393."

"Of course, this model has no real consequence in the real world because the assumptions are unrealistic. But given the gender disparity in SF, 49ers isn’t a very accurate term. The next time your single guy friend complains, tell him that it’s 44.837ers at best." Is that... is that a punchline?

Maybe this is really symptomatic of gender distribution in San Francisco, 2015 after all. Isolated from women, in part by choice, do men sit around and talk like this to each other? I can't claim to know, but I do know the kind of person who assigns numbers or ratings to women. They're zeros.

Longtime bike advocate Noah Budnick, who came from New York City's Transportation Alternatives to take the exec director job at the San Francisco Bicycle Coalition just over eight months ago, is leaving his

Whether you just need some decent whisky to put in your hip flask or you're in the market for a bottle of Carpano Antica to mix your Negronis with, San Francisco has a