San Francisco grand dame and larger-than-life '60s cultural figure Carol Doda has died. The 78 year old was beloved and revered for her bare, entrepreneurial spirit  not to mention her bare, once world-famous, silicone-injected 44D breasts  and will be missed and remembered by many for her legacy of positivity and free expression.

CBS 5's Joe Vasquez tweeted that she passed away Monday at St. Luke's hospital, and the hospital has confirmed the news as well. In the SF Chronicle's obit, longtime Doda friend Dick Winn says, "She was much more than just dancing. She was one of the fastest comedians I ever knew for coming back with wisecracks." 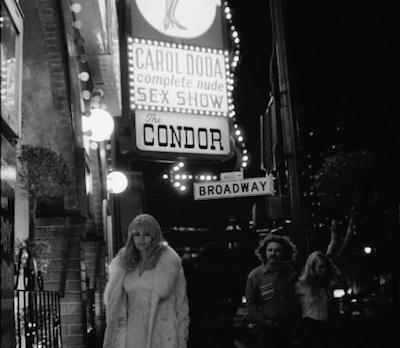 A cocktail waitress in San Francisco by age 14, the Solano County-born performer shortly became a go-go dancer at the Condor Club, a scantily-clad, but nonetheless clad, operation at the time.

But on June 19, 1964, as legend (and the historical plaque now on the building) would have it, when she was lowered from the ceiling atop a baby grand piano as part of her usual routine, something was different. For the first time, Doda daringly sported a "monikini" — which, as opposed to a bikini, is exactly what you think it is.

Quickly, after some battles in the courts, toplessness became not just tolerated, but in fact the norm in San Francisco's red-light district and beyond, with the fashion becoming commonplace along the Broadway corridor within months. In 1969, five years and some silicone injections later, Doda gave her "bottomless" performance, fully nude, and by then she was one of the main tourist draws to the neighborhood. And, from North Beach strip clubs and San Francisco's leniency was then also born the world of American pornography several years later, which also began in SF. 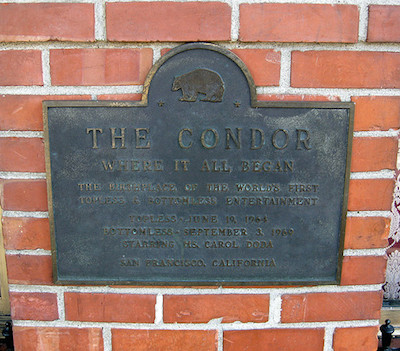 Wally Gobetz via Flickr
Doda and her "Twin Peaks" strutted their hour upon the stage until 1986 (when she was 49), and she was at times over the years arrested during police raids, as there were periods of crackdowns on bare-bosomed shows.

Doda also served as a spokeswoman for channel 36 in San Jose, then known as KICU-TV, and in the 1980s she was frontwoman for her own rock band, the Lucky Stiffs, who performed throughout the Bay Area.

More recently, Doda had been known locally for her store, Carol Doda's Champagne and Lace Lingerie Boutique, and the occasional fully-clad performance. Once in a blue moon, she would sing at Gino & Carlo as well, and could be found there at the bar, where one SFist reader found her celebrating her 77th birthday last year.

With her goes a whole era of San Francisco bawdiness, and she will be dearly missed.

A memorial is tentatively being planned for November 22 at Tupelo.

Update: The New York Times now offers their obit, with a great quote from late in Doda's life, when she was still dancing in North Beach (clothed), in 2009. She told an interviewer, "The only way I’ll stop performing is when I can’t walk anymore, honey."

"American striptease artist Carol Doda poses in a coat, miniskirt, and boots under a marquee baring her name outside the Condor, a strip bar in San Francisco, California, 1970s." (Photo by Tim Boxer/Getty Images)

A man accused of violently attacking a 5-year-old girl as she walked down a Cow Hollow street will be sentenced to two years in prison, San Francisco District Attorney George Gascón said Tuesday.