The Bay Area theatrical tendency to adapt movies and TV shows to the small stage is a well established trope, with the recent run of the Dark Room Theatre and Heklina’s series of drag-infused Golden Girls episodes. But it’s hecka cuter when the adaptation is performed by high school kids. Adorable teens portray deplorable teens at Alameda High School’s fall production Mean Girls: The Play, an all-teen adaptation of the classic 2004 teen film written by Tina Fey that launched 1000 animated gifs still seen in Comments sections today. SFist took in this weekend’s performance of Mean Girls: The Play to get some pictures, video and commentary from the “Desperate wannabes, Burnouts, and Sexually active band geeks” of the cast, and we can verify that the Alameda kids do a pretty mean version of Mean Girls. (Performances continue through this weekend.)

“Our theme this whole year is bullying awareness, cyber-bullying and everything,” said Megan McKinley, Drama and English teacher at Alameda High School who co-adapted the script for the high school stage. “We decided to start with something more funny and light-hearted. But there are a lot of serious issues in Mean Girls, which is why I think it’s still really current.” 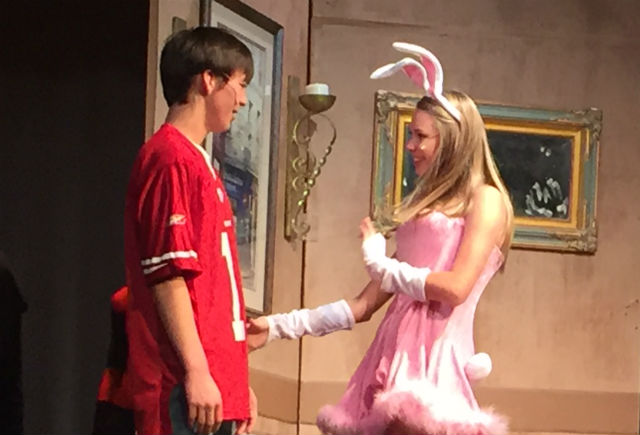 “High school students still just use terrible language with each other,” she continued. “In this age, kids have such a problem with bullying. In our age, we could just go home at the end of the day and if we were bullied at school we could just go home and cry and have dinner with our parents. But today’s kids are never ‘off’. With social media and Internet, they can get bullied 24/7.”

Today’s teens are more ironic and aware than we were in high school, evidenced by the comments of Alameda student Andrew who portrayed the ‘too gay to function’ Damian Leigh. “I changed my part because a lot of the subtleties of Damian in the movie are that he’s like a slightly gay guy. But that doesn’t translate well onstage,” Andrew said, in a statement that would never have been uttered back when I was in high school. Here’s a clip of young Andrew killing it as Damian Leigh as Christina Aguilera.

The Alameda kids altered the source material in a number of ways, including two ‘twin’ versions of the Lindsay Lohan character Cady — one who interacted with the cast in real time while the other handled the narration duties. “I had to make my own character, in a way,” said Alameda student Lucy, who portrayed the narrating Cady not seen in the film. “I had to interact with the real Cady, and by interacting had to do some of her movements and use them in my voice but also adapt them and make them my own.”

Alameda High has a proud artistic history, with notable alums like Kreayshawn, Jim Morrison and, ummm, Sharon Tate. That legacy endures in this completely student-run production with a student tech crew. “There are a lot of set pieces and the props that we use are very heavy,” said Camryn from the student tech crew. “The show was originally two and a half hours. And we cut it down by an hour by speeding up the scene changes.”

Mean Girls: The Play is a fetching adaptation that fans of the film won’t want to miss. But be warned that the entrance to the theatre is tough to find unless you’re “from the island” of Alameda. The street address is listed as 2201 Encinal Ave., but the school’s theater entrance is at Walnut St. and Central Ave. at the northwest corner of the Alameda High campus.

Mean Girls: The Play continues through this weekend, with 7 p.m. shows on Thursday, Friday and Saturday at the Alameda High School Little Theater. Tickets are available online or at the door.

Thanksgiving week will mark the end of an era for Castro nightlife as drag queen DJ and promoter Juanita More is ending her weekly party at Q Bar, Booty Call Wednesdays. Eight years