Beans can be over-roasted. Your pour-over could arrive lukewarm. And lack of functioning, speedy wi-fi can kind of ruin your day. But across town there are a smattering of welcoming, amazing little coffee shops where none of the above are true, and while you might have to do battle  or show up at dawn  to snag a prime seat near an outlet, you're not going to feel like that five-dollar latte was an acrid waste, and you might actually get some work done. (Note: Not every one of these spots has wi-fi... sorry.)


Andytown Coffee Roasters
There are a lot of great places to get coffee in San Francisco, but Andytown is my absolute favorite. On any given day, you can stop by their Lawton Street spot and catch them roasting beans on-site, baking muffins and scones in-house, and serving not just the usual coffee drinks but their surprisingly divisive Snowy Plover, a concoction of espresso, sparking water, and whipped cream that you'll either despise or dream about (I'm in the latter camp). And, look: Good coffee and food is important, but just as significant is service. A lot of places on this list serve a great cup of joe, but the folks at the counter can be prickly or worse. Not so at Andytown, where (and I've watched, because this is a peeve of mine) every single customer is greeted warmly and treated well, from longtime Sunset locals to tourists to your standard fixie beardo. That kindness to every comer is all too rare in this city, and should be celebrated. -- Eve Batey
3655 Lawton Street at 43rd Avenue 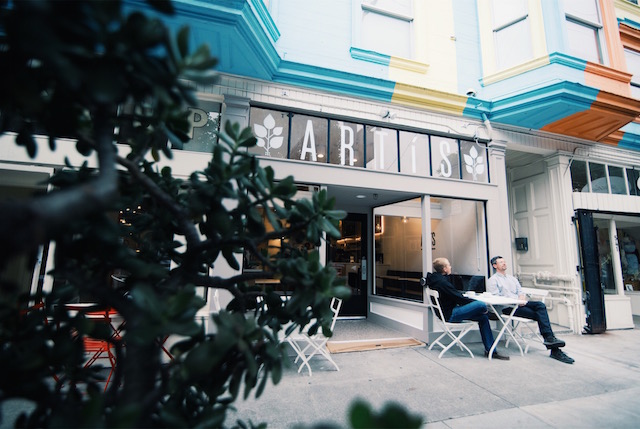 Artís Coffee
With locations in Bangkok, Berkeley, and Hayes Valley, which we'll focus on, Artís is an interesting proposition: Coffee roasted before your very eyes in see-through "Live Roast" tubes. Expect the gallery feel of third wave coffee shops... with the appropriate addition of something to marvel at —namely, those beans spinning and jumping like kernels in a popcorn machine. Grab a seat at the comfortable couple of tables, a few of them outside à la parisienne, and order a satisfying, sweet vanilla latte flecked with freshly ground vanilla beans.—Caleb Pershan
537 Octavia Street between Grove and Ivy Streets 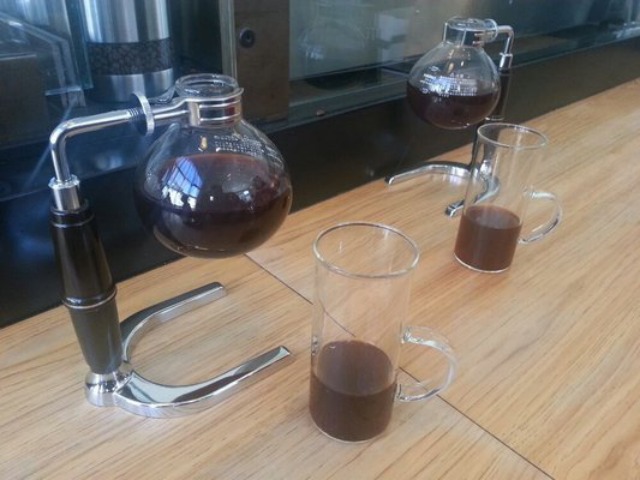 Blue Bottle (Mint Plaza)
Sure, you can't swing a cat without hitting a bag of Blue Bottle beans these days, but there's still something to their location in Mint Plaza. When it opened in January of 2008, the area was very different then it is today: The Chronicle actually occupied its entire building, Mid-Market wasn't a thing, and the only people wandering the area were errant tourists, denizens of Sixth Street, employees of the abutting pawn shop, and journalists. All of those folks originally converged at this fancy new coffee place and its $20,000 rig. A seeming eternity later, you'll see lots of new techie faces waiting in the out-the-door-crazy lines. But the tech ends soon after, with no wi-fi or outlets from their many high seats. Calm down, your cell signal's fine here, you won't miss much. — Eve Batey
66 Mint Plaza, behind the big pawn shop 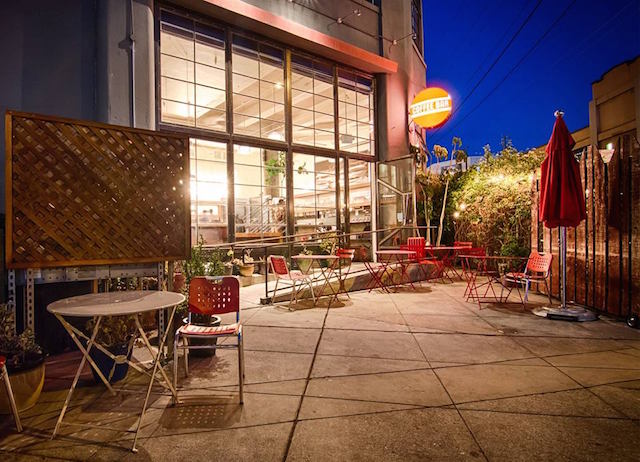 CoffeeBar
Coffee Bar has several locations around the city, but the original location at the corner of Florida and Mariposa Streets has all the things you could want in a coffee shop, so we're calling out that spot specifically. With one of the best cold-brews in the city, a solid food offering (the veggie breakfast burrito is good for springing back after overly ambitious evenings), a nice patio and sidewalk seating, and chill (but not too chill) staff, the spot is great for a quick bite or posting up with a laptop for a day of work. — Jack Morse
1890 Bryant Street, but the actual entrance is on Mariposa at Florida Street 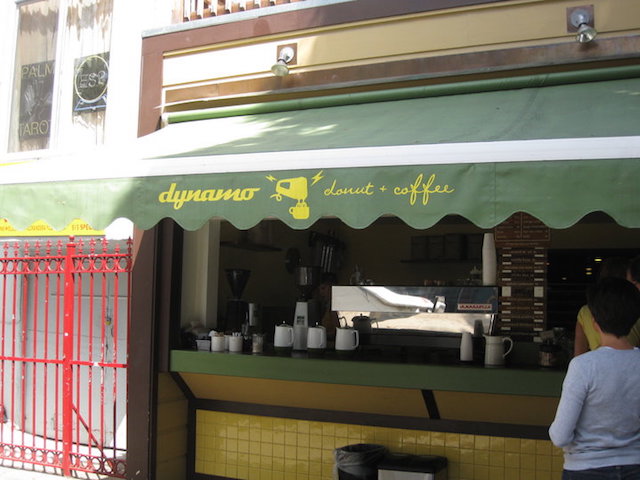 Dynamo Donut + Coffee
With an unassuming green awning above a sidewalk-facing counter, Dynamo Donut + Coffee is the definition of "more than meets the eye." The coffee counter serves Four Barrel coffee, with a particularly strong cold brew option, while the kitchen is busy cooking up some of the best donuts in the city. (If you're feeling decadent, treat yourself to both a Vanilla Bean and a Spiced Chocolate.) Don't be fooled by the tiny interior — if you walk down the long and narrow hallway in the back of the shop you'll find yourself in a wonderful garden. — Jack Morse
2760 24th Street between York and Hampshire Streets 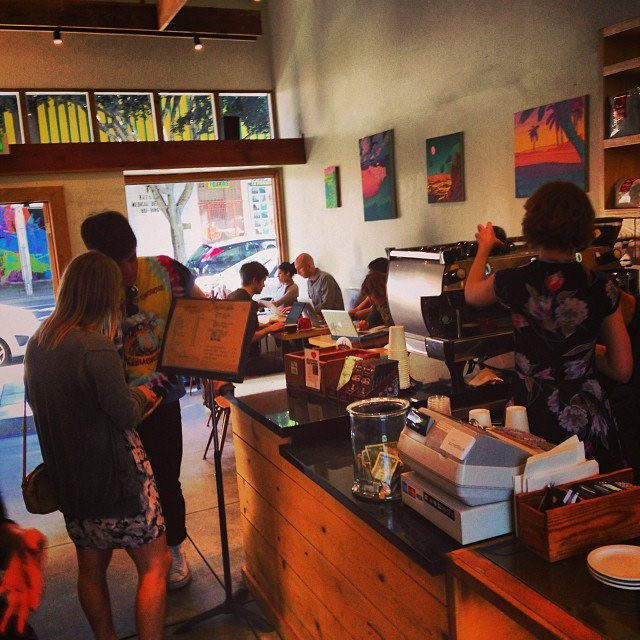 Haus Coffee
Haus Coffee has a lot going for it — a great selection of rotating art, the fact that the baristas have good taste in music, the in-wall fireplace, and of course the big back patio. The low-key shop is also a great spot to work remotely for the day, but don't expect to have any business conversations inside (head to the patio for that), as the place has a quieter vibe. — Jack Morse
3086 24th Street Between Folsom Street and Treat Avenue 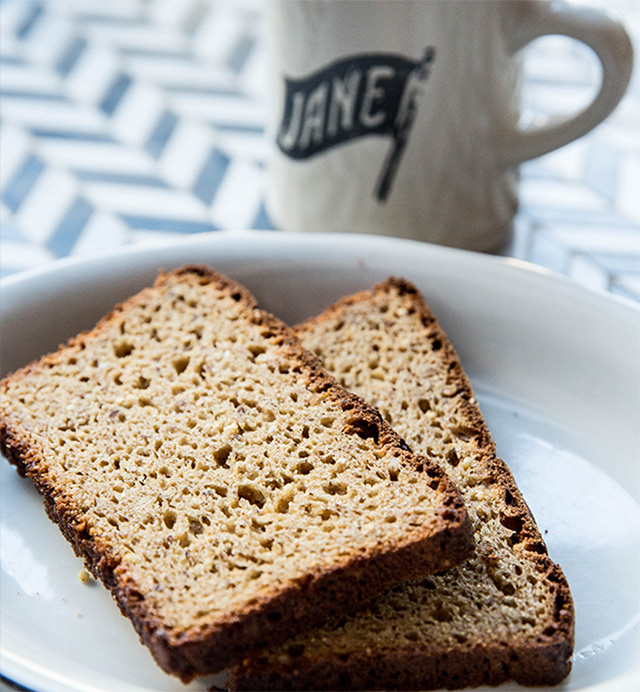 Jane
For those who know and love it, Jane is a lot more than a coffee shop. The original daytime cafe from chef Amanda Michael opened at 2123 Fillmore in 2011 to instant acclaim, largely because of the care put into its food menu. These days they're still serving great granola, hearty egg sandwiches with cheddar and tomato chutney, morning buns to rival Tartine's, and lovely, thick $4 toasts  including the avocado variety  at two locations, the second of which opened last year on Larkin. Also, Jane serves Stumptown coffee, and a variety of great salads at lunch, and this very pretty Instagram account should tell you everything else you need to know. Just note that both location close up at 6 p.m.  Jay Barmann 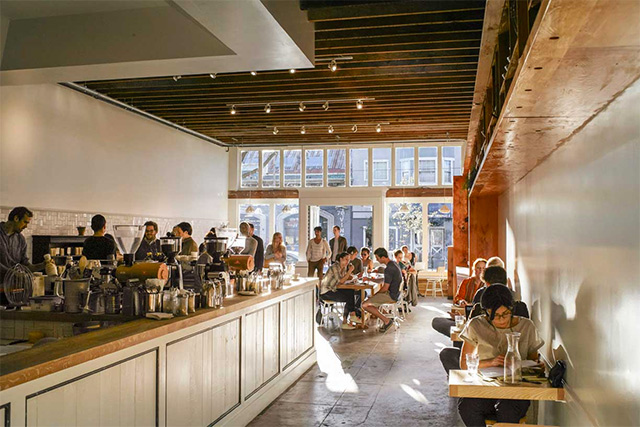 Photo courtesy of The Mill

The Mill
One of three spots on this list that overlaps with our Best $4 Toasts list, The Mill took most of the flack for the toast trend of the last couple years, despite it actually originating elsewhere (see Trouble Coffee, below). But you know what? That shit is delicious. And the coffee here (from Four Barrel) is good too, and so are the chocolate chip cookies. Yes, there's often a line, and/or no place to sit, and like sister beanery Four Barrel there's no wi-fi. That serves to keep the crowds moving through, theoretically, in a place that might otherwise become insufferable (it already kind of is on weekends). But the Pinterest-worthy interior makes for a cool place to unplug and have a real conversation with a friend, and you'll probably want to grab a loaf of Josey Baker Bread to go, to make yourself some 50-cent toast tomorrow.  Jay Barmann
736 Divisadero between Fulton and Grove 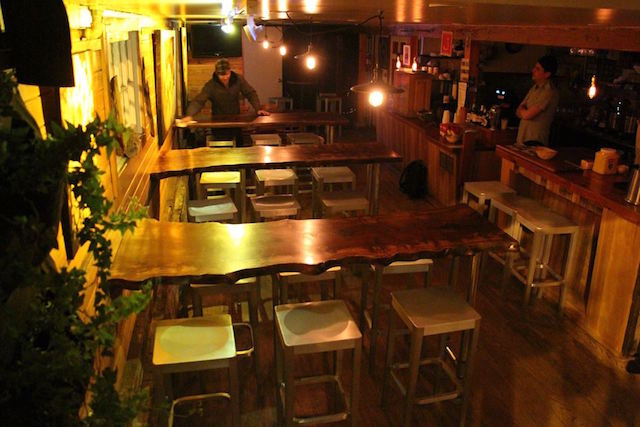 Mojo Bicycle Cafe
Mojo Bicycle Cafe has what you need in a coffee shop when what you need is a break from all the other coffee shops. Part cafe and part bicycle shop, Mojo is the perfect spot to settle in and people watch while sipping your morning cup. Proud of their lack of wifi and outlets, Mojo has a distinctly different vibe. Whether you're in the interior seating, which looks out a roll-up wall onto Divisadero Street, or relaxing in the parklet out front, there is never a shortage of sights to take in. When you've had your coffee and your breakfast (they do wonderfully simple breakfast bagels) but you don't quite feel like it's time to leave, you can stay a little longer and explore the ten beers on tap. It's cash only, but there's an ATM inside. — Jack Morse
639-A Divisadero Street between Grove and Hayes Streets 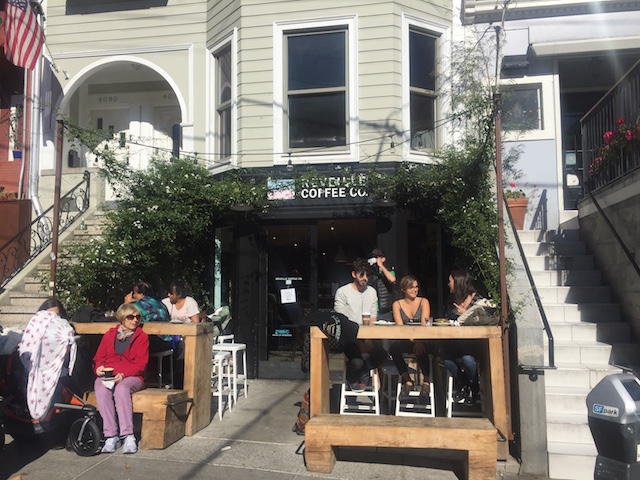 Réveille
Réveille's coffee first tempted me at their Jackson Square truck. Hooked since, now I'm partial to the Castro location. Although the North Beach spot is airy and lovely, there's something special about the tucked-in garage level storefront and outdoor seating on see-and-be-seen 18th Street. Chemex coffee, toast, and flaneurs aplenty make for a standout coffee drinking experience, even in a neighborhood where you can't walk over a rainbow crosswalk without seeing a bevy of caffeine options. —Caleb Pershan
4076 18th Street between Hartford and Castro Streets 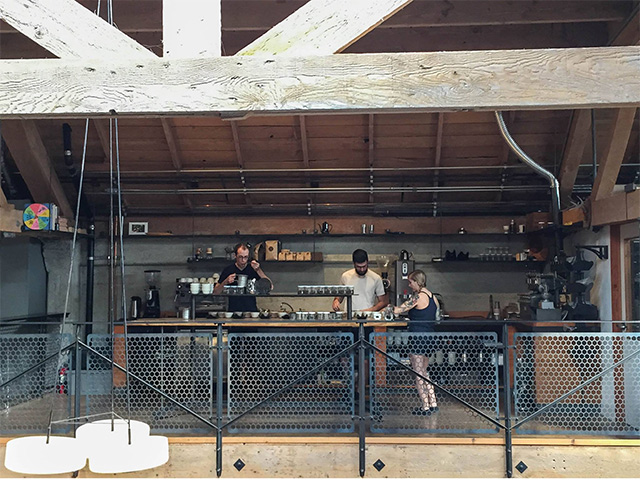 For coffee nerds, Sightglass sometimes does public "cuppings," on the mezzanine at their 7th Street flagship. Photo: Facebook

Sightglass
Sure, there's some fourth-wave pretense about Sightglass, which launched here in SF as an independent roaster in 2010. But the place roasts some excellent, well sourced beans and they quickly gained the respect of top chefs all over town because of it, landing on many a dessert menu. Brothers and business partners Jerad and Justin Morrison broke off on their own after getting some mentorship from Blue Bottle's James Freeman, and they've become coffee world celebs now in their own right. They now have two locations in town as well as a booming wholesale business, and the flagship on 7th Street also has a mezzanine level affogato bar. And just a tip: Yes, some of their 12-ounce bags of single-source beans are priced north of $20, but their basic, starter blend, Blueboon, is the cheapest at $17 and still really good. — Jay Barmann
270 7th Street at Folsom; 3014 20th Street at Florida; also at Ferry Plaza Tuesdays and Saturdays 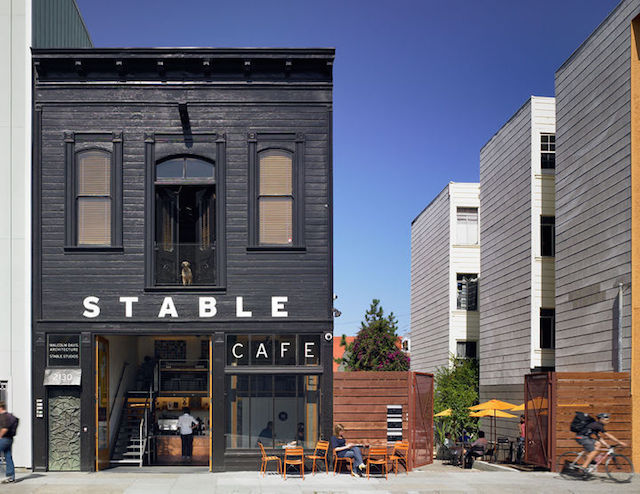 Stable Cafe
If stable had any power outlets, which it wisely does not, I would be there all day, every day. In addition to delicious food, delightful baristas, and divine coffee, there's lots of seating in a lovely garden. It's, like, a goddamn grotto or something. What are you doing right now that's so important that you're not there?—Caleb Pershan
2128 Folsom Street between 17th and 18th Streets 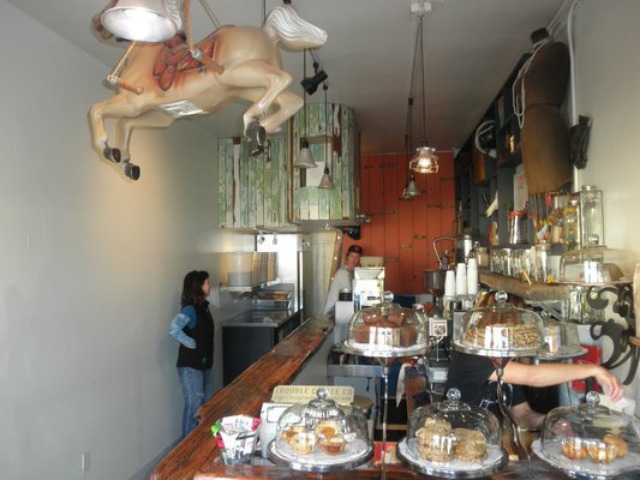 Trouble Coffee & Coconut Club (Outer Sunset)
The Outer Sunset's home of the original $4 toast has been in business since 2007, serving fat cinnamon buttered bread back when Google still promised not to be evil. You can learn all you need to know, and more, about iconoclast founder Giulietta Carrelli in an article (and subsequent This American Life segment) that one Trouble barista described to me as launching "a serious wave of tragedy tourism" to the shop. Since then, Carrelli's opened two more locations, one in the Bayview and another in Oakland, but my favorite is still the OG one on Judah. At that outpost, there's no wi-fi or outlets, and indoor seating is scarce (there's two bars, that's it), but there are benches and a parklet right outside for those impervious to the westside weather. — Eve Batey
4033 Judah, between 44th and 45th Avenues; 1730 Yosemite Avenue, Near Third Street; and 1545 Willow Street, Oakland 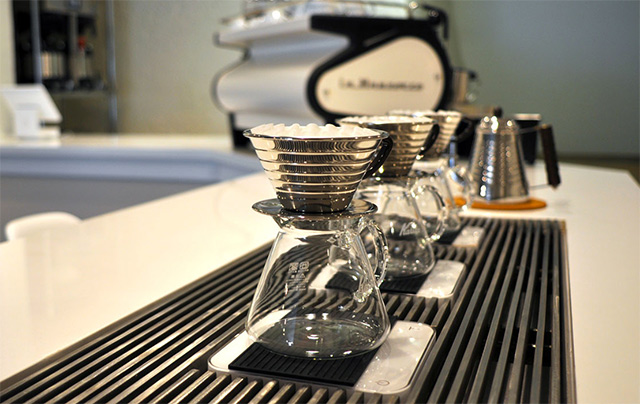 Wrecking Ball Roasters
If you ever wondered where the term "third wave coffee" got started, look no further than Wrecking Ball Roasters co-founder Trish Rothgeb, who's something of a guru for coffee nerds with experience going back 25 years. Along with head barista (and significant other) Nicholas Cho  both Rothgeb and Cho serve on the board of the Barista Guild of America  she founded Wrecking Ball Roasters and opened their Cow Hollow cafe in 2014. And, among the coffee intelligentsia at Sprudge, this place has become a mecca, serving what they say is arguably the best coffee in town. They're so badass, in fact, that they serve an iced cappuccino that no other third-wave shop would dare put on their menu because it sounds too much like Starbucks. Basically, you're going to hear more from them in the future as they contemplate new locations, and as coffee culture enters what some already say is a "fourth wave."  Jay Barmann
2271 Union Street at Steiner

“I had made a promise to myself [that] I would sleep with the trophy that night,” Warriors majority owner and former managing partner at Kleiner, Perkins, Caufield and Byers Joe Lacob tells Haute

In 2015, the Bird Man of Alcatraz wouldn't mess around with flighty pigeons. He'd have drones. Helping us imagine what that might look like is the above video. Yep, it's over a mile,