Maybe because of June's Supreme Court ruling on marriage, or maybe because of Caitlyn Jenner, or just because of the tidal wave of mainstream support in general for the LGBT cause, nearly a million Americans came out on Facebook this year. And the rate at which people are coming out, according to a new internal study of Facebook data, is on track to be triple what it was, per day, just a year ago.

A whopping 800,000 people in the U.S. have changed their sexual orientation or gender identity since National Coming Out Day (Oct. 11) in 2014, and the number of people coming out per day noticeably spiked in June at the time of the Supreme Court decision, as the graph below shows.

Around that time more than 26 million Facebook users applied the rainbow overlay thing to their profile pic, to show their support. And now, 6 million users of the site in the U.S. identify as LGBT, many of them having just come out as such, on the site, in the last three years. "Strikingly," the report says, "of those who are out on Facebook, approximately 78% made this change to their profile since the beginning of 2012." 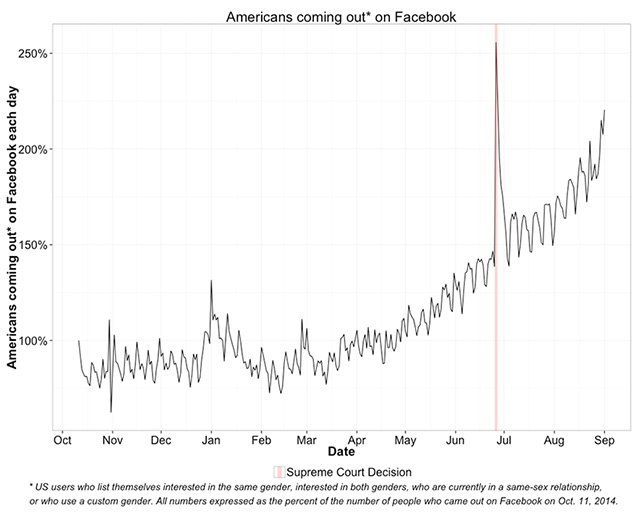 As you can see, the Y-axis shows the rate at which people have been coming out, per day, and how rapidly it's risen in recent months. And, as researchers Bogdan State and Nils Wernerfelt write, "On a typical day, one out of every ten people who change their 'interested in' status on Facebook do so to reflect a same-gender interest."

And, "Since we only consider those who have expressed a same-gender attraction or list a custom gender on their Facebook profiles," they add, "it is likely that this figure is an underestimate of the total number of 'out' Americans."

As The Verge notes, this marks an important new application for Facebook's personal data and research.

The social network's research and data science teams are not typically known for examining sexual or gender orientation in their public studies; recent blog posts include visualizing crisis relief in Nepal and tracking how users express laughter across the website. That makes today's announcement one of the most personal insights into Facebook's nearly 1.5 billion-person user base ever revealed.

It seems like only yesterday that the City Attorney's office announced it would be closing down illegal gambling cafés in the Excelsior. The sweepstakes cafés, which have operated under a legal loophole in

According to the San Francisco Police Department, a man who was fatally shot by an SFPD sergeant Thursday afternoon had wrested a gun away from another cop, and was pointing it at the