On the left you have the latest design for One Van Ness, by Norwegian architecture firm Snøhetta. On the right, a proposed residential tower at Mission and South Van Ness by Skidmore Owings & Merrill, which Socketsite points to today, slated to go in on the Goodwill site from developer Related California. One Van Ness would be 37 stories and contain 308 units. The Related California project would be 560 units, both luxury and affordable, and would be 39 stories.

Add to these two proposed towers that may go in on the site of the Honda dealership at 10 South Van Ness, shown below in a conceptual rendering. AND there's a request for proposals out for a city-owned property at 30 Van Ness (the building on the corner across from One Van Ness that's currently home to Walgreens) where a 40-story, 600-unit tower could be built, and Related California is in the running for that one too. 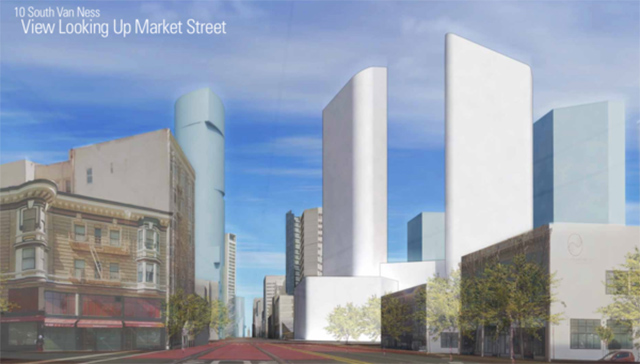 The building on the Goodwill site, as Socketsite notes, would also contain 24,000 square feet of ground-floor retail. 20 percent of the residential units are proposed as affordable, though that number could go up as the approvals process goes on  and given the Mayor's stated goal of having 30 percent of all new units be affordable.

Along with the Transbay district, the middle of the city could be getting quite tall, ladies and gentlemen. Just wait.

Previously: People Are Mocking The New Design For A Tower At One Van Ness

After last week's relative reprieve, we're back to out and out sadness this week with a tent that some dude is renting on his deck in San Anselmo. But it gets even worse