There is no joy in Torture Town today. The San Francisco Giants will not defend their World Series title. With a dismal 8-0 loss to the Dodgers Tuesday night that let LA celebrate and drink champagne at our field, the Giants are officially, mathematically eliminated from MLB playoff contention. Last year's World Series MVP Madison Bumgarner was yanked after giving up consecutive home runs in the sixth inning, while the Dodgers’ Clayton Kershaw threw a complete-game, one-hit shutout. Ironically, it was the first time the Dodgers have won a game at AT&T Park yet this season.

Here they are, celebrating... 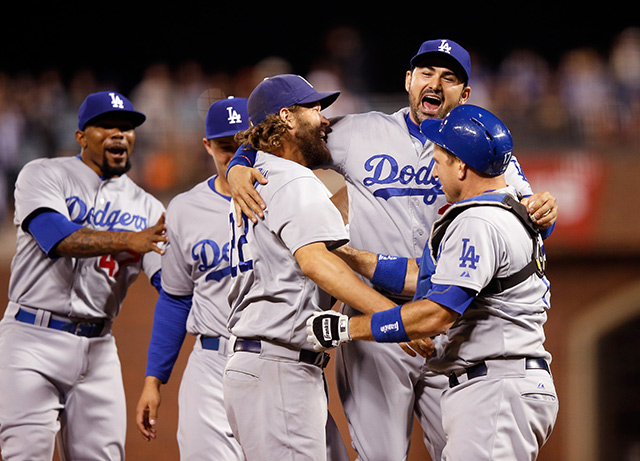 Five home games remain on the schedule at AT&T Park, but the 2015 Giants will not repeat as champions. It was still an intriguing, fun, winning season despite the unsuccessful title-defense. Madison Bumgarner rode out on a horse for the home opener and then hit so many home runs that he was contemplated as a designated hitter. Rookie Chris Heston threw a no-hitter. Hunter Pence played video games with our old friend (and SFist editor) Brock Keeling. The Giants met the President. A fan dove into McCovey Cove chasing a ball. The team made a Full House video. Jon Miller did a running “Hello Kitty” joke that produced whimsy for weeks

And through it all, Pablo Sandoval completely sucked for his new team in Boston. That was always nice to fall back on.

But fall back we did, as the injuries were so relentless it’s a wonder the Giants even contended this deep into the season. Hunter Pence (oblique), Brandon Crawford (oblique and calf), Brandon Belt (concussion), Joe Panik (back), Gregor Blanco (concussion), Nori Aoki (concussion), and Tim Lincecum (hip) are all sidelined as the season ends. Matt Cain (tendon strain) started the year on the disabled list, and finishes the year in the bullpen while rehabbing from a separate stay on the disabled list (elbow). That’s a lot of last year’s World Series roster gone, as all but Cain and Aoki were on last year's 25-man roster that won the title.

The season’s end brings some permanent farewells. Pitcher Tim Hudson will definitely retire from a stellar Bay Area pitching career. Tim Lincecum has an expiring megabucks contract and a degenerative hip condition, so that’s going to lead to some uncertainty. Marco Scutaro (still on the roster!) is giving signals he's retiring. Pitchers Ryan Vogelsong and Jeremy Affeldt are both free agents.

Yet the minor league prospects called up during this oblique-and-concussion outbreak were impressive. Nobodies named Kelby Tomlinson, Josh Osich and Jarrett Parker have been keeping the Giants mathematically alive lately. Matt Duffy was in the Rookie of the Year conversation. There’s no reason to think that the even-year formula these Giants have established — longer offseason with a chance to heal, hungrier team getting less respect, solid youth with a key acquisition and some good, old-style Bochying — might not kick in again for the Giants to have a great shot in 2016.

When real estate industry website Trulia set out to map the noisiest neighborhoods in San Francisco, they did so by pulling "about five years" of "police data on noise complaints," they say. But

With its fog-free evenings and sprays of cirrocumulus clouds, September has given us some phenomenal sunsets, especially a string of them last week. And then, yesterday evening, there was another one for the

—
It's Over: Giants Eliminated From Playoff Contention Losing 8-0 To The Bums
Share this