Black Mass tells the true story of James "Whitey" Bulger (Johnny Depp), who lead a crime ring in Boston in the 1970s and 80s; his brother Billy Bulger (Benedict Cumberbatch), a Massachusetts state senator; and John Connolly (Joel Edgerton), an FBI agent who was childhood friends with the Bulger boys. It's a story tailor-made for the movies: FBI agent convinces the gangster to help gather information about the Mafia, promising to keep the law off the gangster's back, while the senator brother does what all corrupt politicians do best: lie.

The main appeal of Black Mass is likely seeing Johnny Depp step away from his series of extravagantly-fantastic wacko roles to take on an evil real-life wacko role. Alas, Depp is still playing a character that's way too dependent on make-up. Instead of, say, dreadlocks or baby smooth skin, we have a bald cap, a thinning white wig, creepy icy blue contacts, and a dead tooth, all on a pale, mottled face. All that, and he still doesn't look much like the real Whitey Bulger, who unlike the dainty Depp was a strapping Irishman. Depp's Bulger is less barrel-chested bruiser, more Gary Oldman in the first act of Dracula.

Which isn't to say Depp is terrible in the role. He's does a pretty good job with the Southie accent, and has a few moments that are genuinely evil and creepy. I just couldn't help thinking how any number of other actors could have done it better.

Which is kind of the problem with director Scott Cooper's film in general. You can't make a movie about gangsters, informants, and Whitey Bulger and not be compared to Martin Scorsese, who tackled both subjects in the far better movies like Goodfellas and the American remake of The Departed.

Like Goodfellas, the movie starts out with narration. It comes from a former Bulger gang member (Jesse Plemons) who has turned state's witness, and is talking about how he met Whitey in the 70's. You might think that the story is going to be told by the informants, but then it immediately veers away from that conceit by showing us stuff the person supposedly revealing the events would never know. This happens with two more former gang members-turned witnesses. What we're seeing is not through their eyes, and the movie would work the same without the narration, so why bother?

Needless to say, women don't play much of a role in this boys' club. And, really, I don't have a problem with that: the story is primarily about the three men, and their dealings with each other. But, I'd almost rather have no women in the movie, than what we're given: the usual "Your job means more to you than me!" whining wife (Julianne Nicholson, as Marianne Connelly) and a doomed hooker (Juno Temple), which, aside from a brief appearance by Dakota Johnson as the mother of Bulger's only child, is all we get.

Since the ground covered in Black Mass has been covered before many, many times, and often much better, I think a moratorium should be placed on stories centered on the rise and and fall of gangsters. Instead, gives us some movies about gangsters after they've made their getaways. I'd love to see Henry Hill ordering those egg noodles with ketchup and then getting into a fight with the delivery boy. And I'd especially love to see a movie about Whitey Bulger, aging fugitive, taking a trip to his former home of Alcatraz with his girlfriend, balls still big enough to pose for this classic tourist photo. 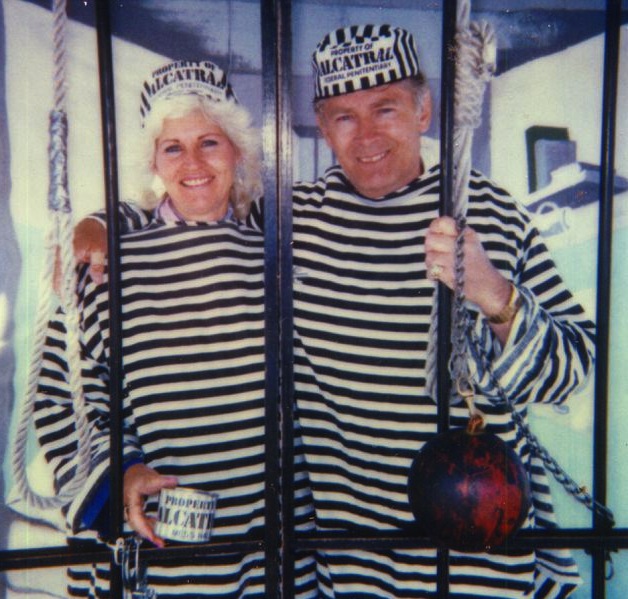 Teachers and nurses gathered in front of Ron Conway's supposed residence at the Four Seasons hotel to tell him SF is not for sale, but you might think otherwise when you look at

—
The Enemy Of My Enemy Is My Friend: Black Mass, Reviewed
Share this