As you're well aware if you've strolled or biked by the intersection of McCoppin and Valencia Streets on the cusp of Market Street, McCoppin Plaza rarely resembles the above promotional photo. Instead, the so-called hub is home to a variety of homeless or semi-homeless people in various sad poses. On some days, it's simply empty.

It wasn't supposed to be that way, and neighbors don't like it that way. You may recall the 2014 renovation of McCoppin Plaza, which was funded by the Central Freeway project, whereby it became McCoppin Hub Plaza. But the subtle, hopeful name change was perhaps the biggest real alteration. 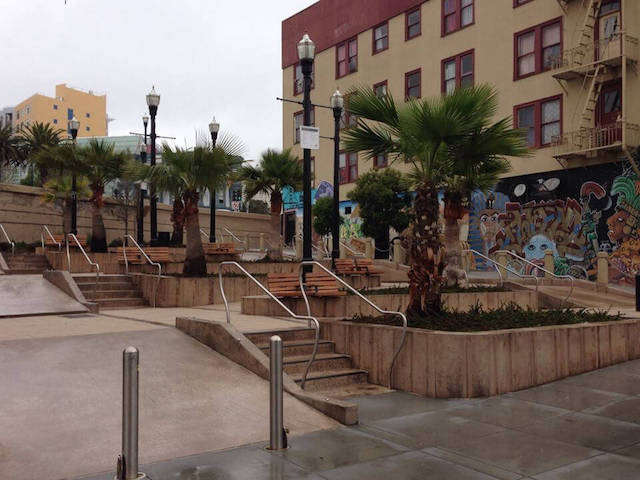 The idea was to redesign the space for a variety of programming and events like food trucks and movie nights. It did receive a successful facelift, and movie nights are advertised. But despite being specifically designed to accommodate them, those food trucks — from Off the Grid — stopped coming. Instead, homeless men and women gathered there. A grand total of nine planned events were held in the plaza in 2014. Neighbors complained — or continued to complain.

So, as Mission Local and Hoodline report, District 6 Supervisor Jane Kim held a meeting last night to consider solutions. One of them, supported by Kim's office: Fencing off the area, perhaps with a large gate to be opened only during sanctioned events, in a project that might take six months to complete. Another: Creating a community garden. 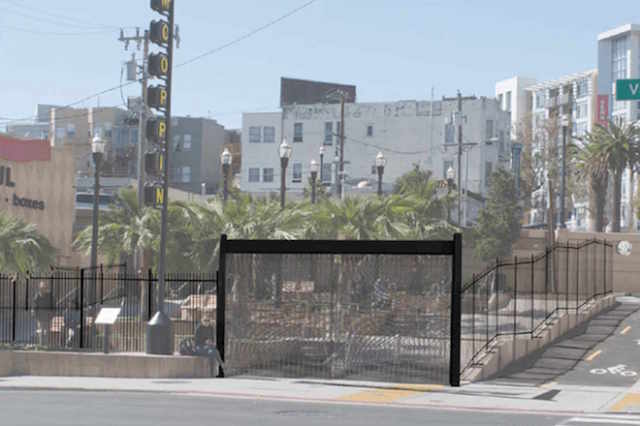 One neighbor on nearby Elgin Park reportedly chimed in that “I think it’s great that you’re trying to activate it, but just put up the fence.”

Others were outspoken against it. “I walk past McCoppin Hub every day and I have never once felt unsafe," noted one neighbor. "These are humans. Where are they supposed to go? This is a utility for the public. They are part of the public.”

Neighbor Vanessa Gregson who works for San Francisco Planning and Urban Research association (SPUR), pointed out that homeless folks might simply spread out onto the sidewalk. “if you make a public space less accessible, people will be less interested in using it,” she said.

As for the Community Garden, Hoodline writes:

Another solution discussed that was of interest to many: turning McCoppin Hub into a community garden. [Robin] Havens [of the Office of Economic and Work Development] explained that the city's Urban Agriculture Program helps groups of neighbors and nonprofits sign agreements with the city to turn plots of public land into community gardens. Many agreed that such a use could work for the space, with Nomad Gardens (which is based in Mission Bay for about one more year) or the folks behind the former Hayes Valley Farm potentially taking over the plot. Homeless neighbors could also participate in the garden, one commenter pointed out.

The discussion reportedly took an hour-and-a-half. At its end, Supervisor Kim said her office will continue to support the fence.

This article has been updated to reflect that Vanessa Gregson does not work for or represent SPUR, as previously reported.

Related: During The Super Bowl Mayor Lee Says City's Homeless Will Have To Leave

Though the actual cause of the devastating Valley Fire in Lake County remains under investigation, authorities appear to have located its origination point, and it's in the community of Cobb where some of

Sure, you could go see Steve Jobs: The Man in the Machine, the documentary about the Apple co-founder released earlier this month. But why do that when you can gaze upon a be-turtlenecked