The San Francisco 49ers kick off their regular season this weekend (Monday Night Football at 7:20 p.m. on Monday, Sept. 14, ESPN) but the NFL season begins Thursday night (Patriots-Steelers, 5:30 p.m. on NBC). It’s officially NFL kickoff weekend, so the bloom is temporarily back on the 49ers’ rose after an offseason of discontent, departure, unexpected retirements and off-field unpleasantness.

The focus is back on football, so we’ve focused our attention on the sweetest custom 49ers cars, vans, trucks and sundry vehicle accessories in the Bay and beyond. These are real street vehicles, so we’ve taken out the license plate information. Except in the cases of vanity plates, for which we do draw attention to the license plate information. After all, they’re called vanity plates for a reason. 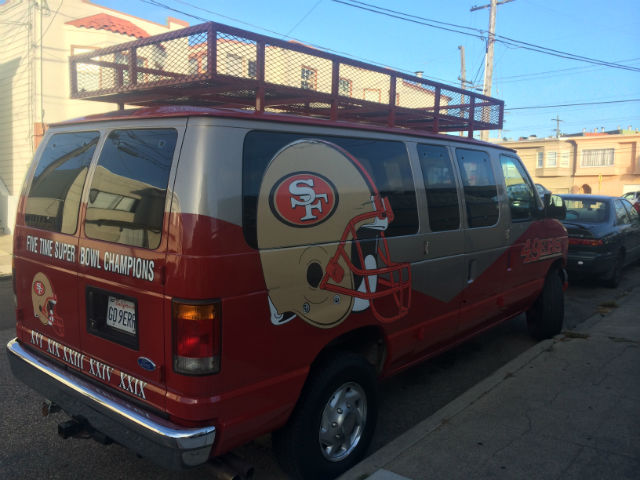 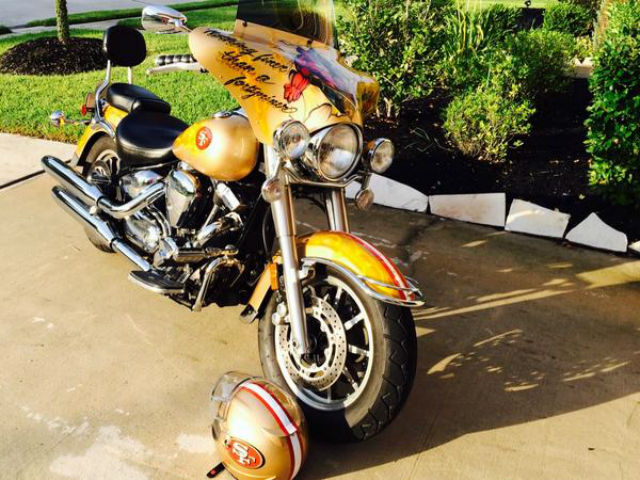 Perhaps our friend Hillory Broussard of Texas takes a lot of shit in Houston for his 49ers custom motorcycle airbrushed with the phrase “Nothing finer than a Forty-Niner”, complete with matching 49ers motorcycle helmet. But surely there is a limit to how much shit fans of the unaccomplished Houston Texans franchise are allowed to talk? 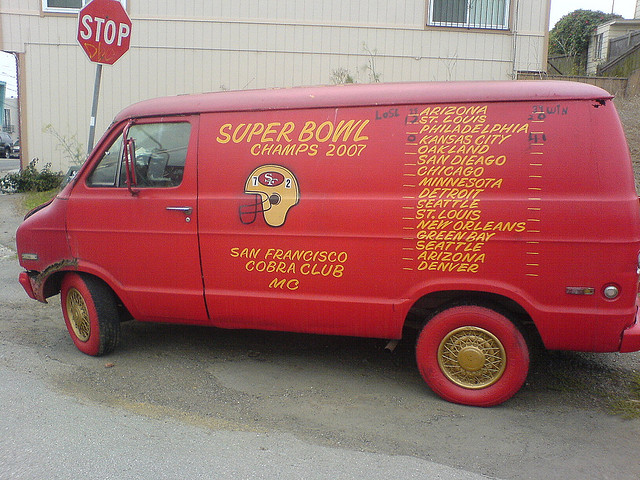 Things did not work out as planned for the owner of the ‘Super Bowl Champs 2007’ van, who lovingly hand-painted this vessel (and its tires) with the 49ers' full 2006 regular season schedule. That was a Mike Nolan year, you guys. We went 7-9 and did not win the Super Bowl. 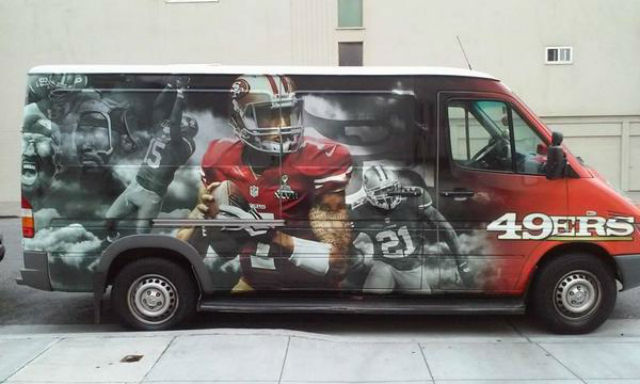 Rather than noting the 49ers’ past, this bus from Atlanta-based Mr Design Junkie honors current 49ers. That is, if you count Michael Crabtree, Frank Gore and Patrick Willis as “current 49ers”... 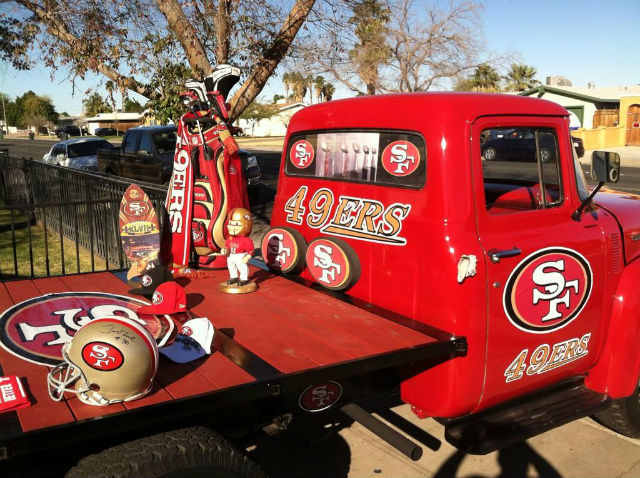 Here we see a 1956 Chevy truck from southern California’s Imperial Valley, customized complete with golf bags, a jumbo bobblehead, and the ‘five Lombardi trophies’ rear window decal that prevents the driver from seeing behind him or her properly. FAITHFUL.

‘Who’s Got it Better Than Us’ Truck 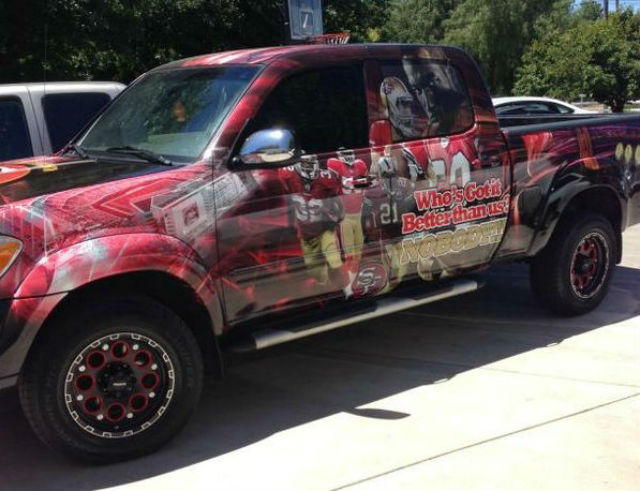 Do you still say “Who’s got it better than us?” in the post-Harbaugh era? If you’re this truck’s owner, you sure as hell still do. 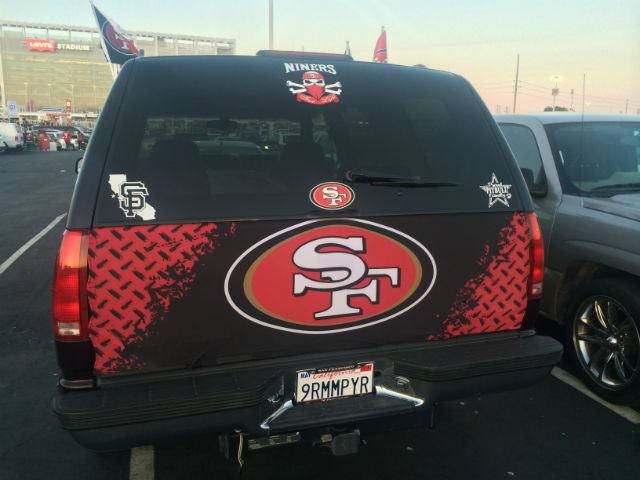 The hood/trunk door slip cover is a mass-produced accessory available for all NFL teams, and it’s not even a permanent vehicle fixture. But it works so well alongside this series of NorCal decals curated by “9YRMMPR”. (Don’t worry, it took me a minute too.) 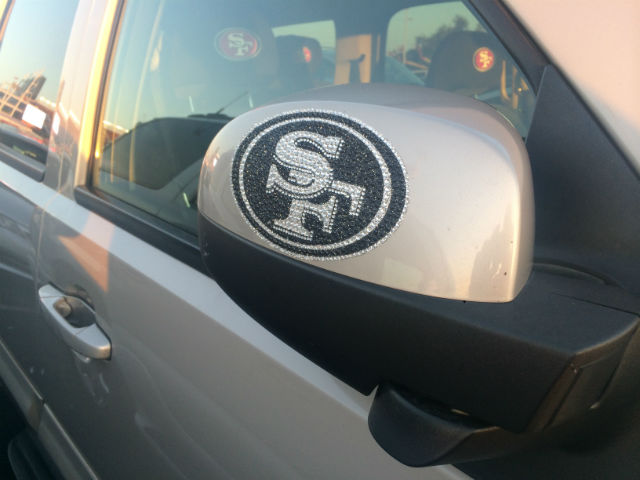 How cute is this bedazzled SF automobile decal? It is indeed a permanent exterior car fixture and shows heart like it was named Tomsula on several differently colored and shaped auto models. 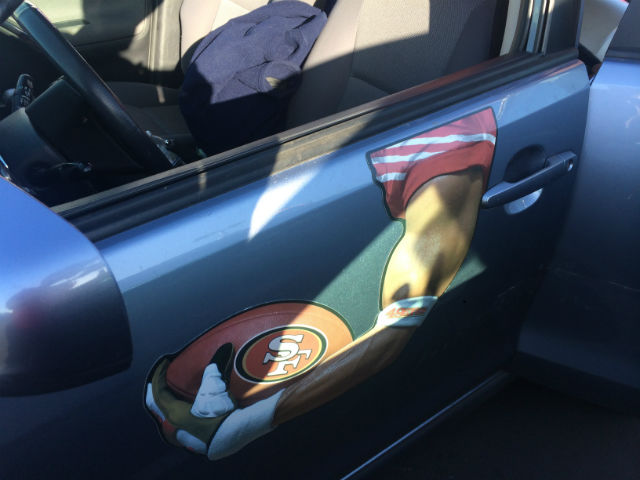 Several NFL teams offer the team-branded bicep door decal, but this decal takes on a special significance in the NFL market of notorious bicep-kisser Colin Kaepernick.

The Jack in the Box 49ers Antenna Ball Topper 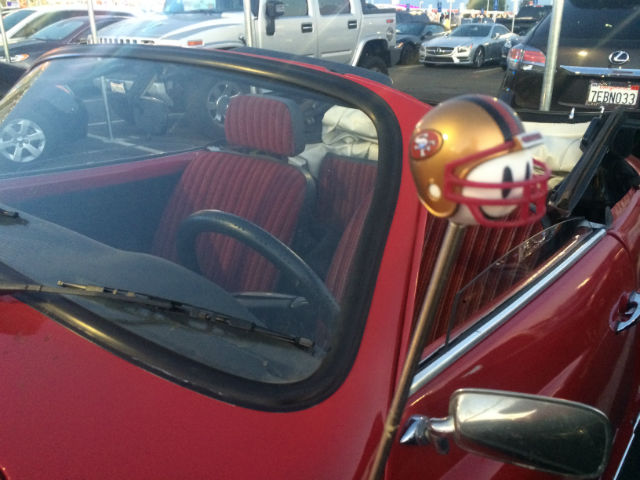 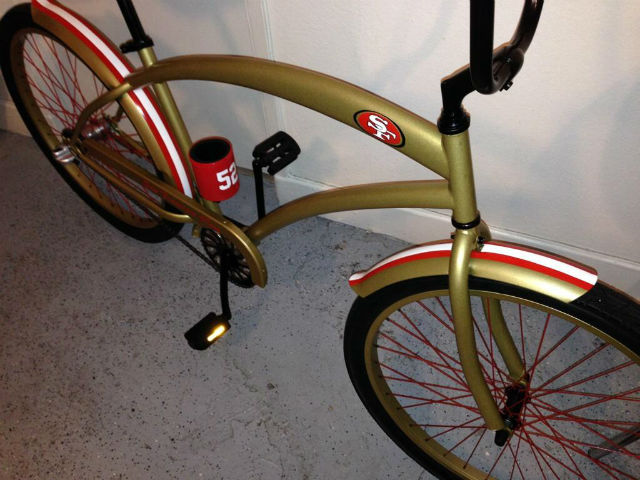 Look at this fucking hipster. And look at his delightfully engaging 49ers bicycle, especially ‘engaging’ considering that his fiance bought if for him.

GO NINERS! SAN FRANCISCOOOO! Did we miss any great custom vehicles? Post any other photos or stories in the Comments below, and good luck to the 49ers Monday night against the Vikings!

In the case of one Castro neighborhood restaurant that announced it would close soon, it was a landlord squabble that did them in. In the case of another, it was probably poor business