The SFMTA is hailing its experiment, known as the 5L-Fulton Limited Pilot Project, as a success. Already, they say, it's moved and consolidated stops to increase speed and ridership  on this and other tweaked routes, ridership is up 2,500 trips per day according to a report released this week. Now the renamed 5R-Fulton Rapid will soon improve further with the addition of traffic circles and a few other changes on McAllister Street to reduce travel time by 20 percent (and help the 5R-Fulton live up to its "rapid" name).

“The 5-Fulton is a critical crosstown link for the city of San Francisco, transporting over 20,000 riders daily,” Chairman of the SFMTA Board Tom Nolan said in a release of the bus that travels the length of the Richmond to Downtown. “These improvements will improve Muni’s travel time, increase reliability and support our overall Vision Zero goal to eliminate all traffic fatalities.”

So, 5 riders, get ready to race (at a safe, reasonable speed) around some traffic circles to be installed at McAllister & Steiner and McAllister & Lyon. Note that the bus stop at that latter intersection will be removed. 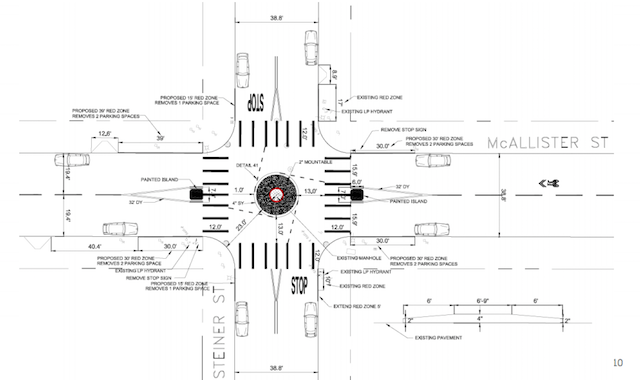 Citing a cool scenario-based transit map of San Francisco which you can try out, CityLab writes that "[the] lesson is clear: operating a transit service well is on par with building a new one."

“The cumulative result of the 5R has been dramatic increases in both service and ridership for this route,” said Ed Reiskin, SFMTA Director of Transportation. “Ridership grew by an impressive 10 percent along the entire corridor. When we zeroed in on certain streets, service between 6th Avenue and downtown jumped by 33 percent during the morning peak, 13 percent during the afternoon peak and 60 percent during midday operations. Muni collisions also dropped by 36 percent on Fulton between Central and Stanyan.

The improvements are funded in part by the 2014 Transportation and Road Improvement Bond of $500 million.

Related: This Scenario-Based Transit Map Will Change Your Commute

Off Highway 280, there's a house in Hillsborough that looks better suited to the town of Bedrock. Yes, the "Flintstone House," as it's affectionately known, has been something of a roadside attraction since