A group of 10 African American women and one white woman whose book club goes on an annual wine-tasting excursion to Napa were reportedly treated unfairly aboard the Napa Valley Wine Train on Saturday, and subjected to removal by train staff and police who claimed they were behaving too noisily and rambunctiously. The Napa Valley Register and the Chronicle have picked up the story after 47-year-old Lisa Johnson of Antioch created a social media firestorm in the wake of the incident.

According to Johnson, she and her book club, which included an 83-year-old grandmother, were simply laughing and enjoying themselves aboard the train, which travels 18 miles from Napa to St. Helena and includes wine service and lunch. "The train is set up to be with your friends, to drink wine and have a good time,” says Johnson. “We were thinking, ‘Who are we offending?’" Nonetheless when they reached St. Helena station, they were met by four officers of the Napa Valley Railroad Police and the St. Helena Police departments.

“To get escorted into the hands of waiting police officers. That’s the humiliating part," says Johnson.

A statement by the Napa Valley Wine Train says that they received at least three complaints from other passengers on the train car, and their staff were merely trying "to ensure the enjoyment and safety of all of our guests." They added that people being removed from the train for being too noisy or disruptive is "not an uncommon occurrence."

However perhaps as a result of Johnson's escalating the incident on social media, train staff posted a defensive statement to their own Facebook page which has since been removed, but which Johnson screencapped. 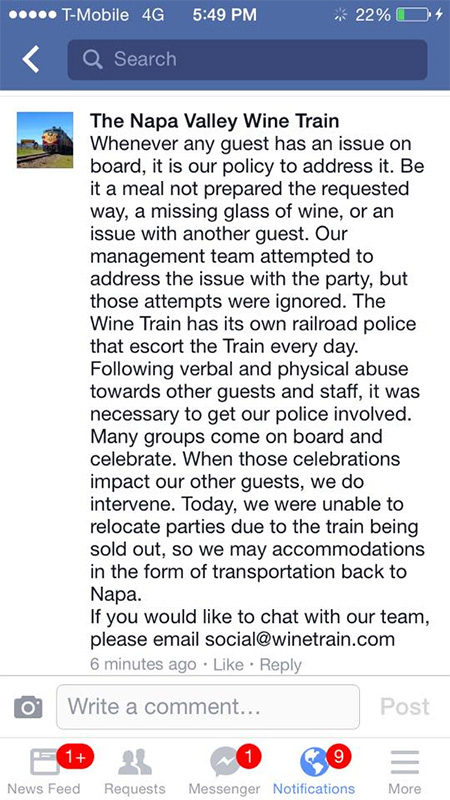 Johnson and her group all received full refunds, but she was incensed enough by the above statement to not drop the issue, and she's now demanding an apology from the Wine Train.

To support her claim that she and her group were treated unfairly and were not just playing the race card, she posted this Yelp review from another passenger who witnessed it all.

The company says they're now conducting an internal audit of the incident to make sure the staff conducted themselves appropriately, and they have further reached out to Johnson and her friends to make amends.

Johnson tells the Register that she and the book club are going to meet after they "decompress" to "discuss our options," which may include a civil lawsuit.

The underground competitive drinking contest known as the Beer Mile had a milestone event on Treasure Island Saturday, with the Beer Mile World Classic bringing the drinking game's world record holders together for