As reported a couple weeks back, Chino at 16th and Guerrero just got a whole food makeover at the hands of one-time Laiola chef Ron Pei. The restaurant, while pretty consistently crowded since its 2014 opening, had a sort of uneven pan-Asian menu before that focused on dumplings, and going forward Pei is focusing on Chinese food with Shandong roots, California produce, and some street-food influence.

You can see that in the menu below, which Tablehopper brings us but it's also live on the Chino site now, with things like braised romano beans with early girl tomatoes and Chinese bean paste; a "night market-style fried chicken yum yum snack"; jajangmyeon “fried sauce noodles” with fermented bean paste; and mu-shu style braised lamb. There are also a few items that pull influence from other parts of the globe, like a steamed bao de bacalao, with salt cod; and shrimp-n-grits.

Cocktails have also gotten an update, and you can see those here. And there's now an "edible cocktail" that's a take on a Pimm's Cup, but with "Chino explosive powder," which may need a little further explanation.

See it all below. 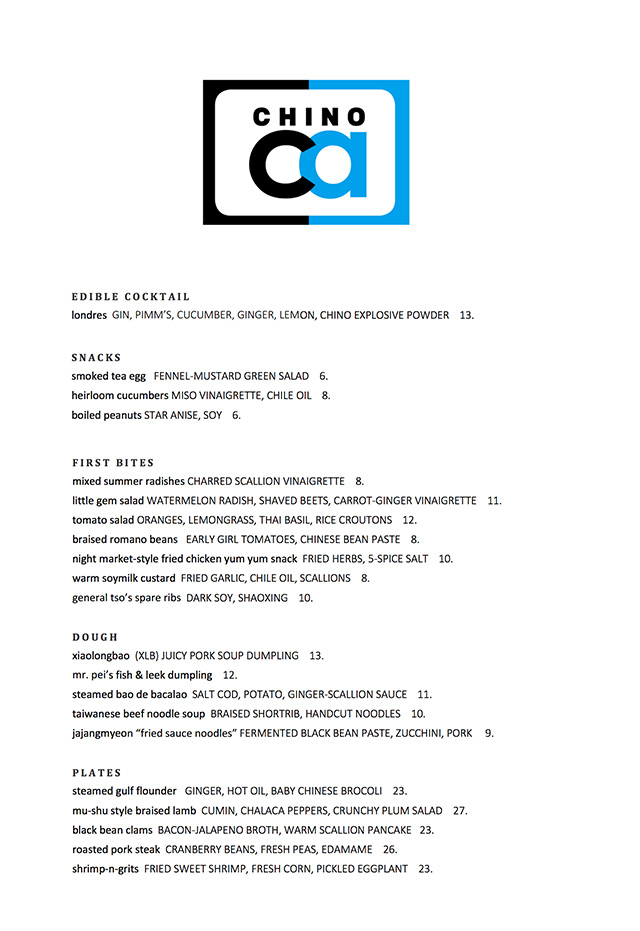 Chino - 3198 16th Street at Guerrero - Open seven days a week, with nightly dinner at 5 p.m., closing at 11 p.m. Sunday through Thursday, midnight on Friday and Saturday; brunch and all-day menu served starting at 11:30 a.m. Saturday and Sunday - Reservations here, but most of the tables are for walk-ins

"What if, like, a drone could deliver weed in San Francisco?" It's the kind of question that, asked between coughs, might get a laugh — but also might end one's turn at the bong

A 32-year-old man with a long rap-sheet and clear problems with authority, and following the law, got a reprieve from a liberal Superior Court judge who could have given him a 40-year "three

—
Check Out The New Menu At Chino, Which Is Back Open
Share this