Last night there was one of the first preview events for Dominique Crenn's Petit Crenn in Hayes Valley, for industry friends and media, and I can tell you right now that this thing is likely to be a surefire hit. Not only is the space, the former Bar Jules, as inviting and perfectly scaled as a neighborhood restaurant should be, but the concept fills a niche for the neighborhood, and the city's food scene, that hasn't been filled  food from Bretagne (Brittany) in a family-style, two-seating, dinner party structure, with some a la carte options at the bar.

Ever since we lost Ti Couz, the homey food of northwestern France has been missing from the SF pantheon, but that ends next week when Petit Crenn makes its public debut. Crenn says that she's creating menus inspired by the rustic food of her grandmother.

Today we have a sample menu, as it was on the chalkboard last night, showing what a meal at Petit Crenn could look like. As promised, the focus is a whole roasted fish, in this case trout with a cider sabayon. And there are oysters to start, and a couple of vegetable courses, including a salad before dessert. The escargots, by the way, which were part of the preview last night, come in an earthy, delicious preparation with a rich mushroom broth.

The menu will change nightly and seasonally, and in addition to the $72 family-style prix fixe  Crenn warns that late arrivers for either of the two seatings at 6:00 p.m. and 8:30 p.m. may end up missing out on a course  you can expect some delicious French omelettes for dinner at the bar, as well as more a la carte options to be announced. Also, the place will be open all day, with breakfast and lunch menus that will include (wait for it, former Ti Couz lovers...) Bretagne-style buckwheat crepes. 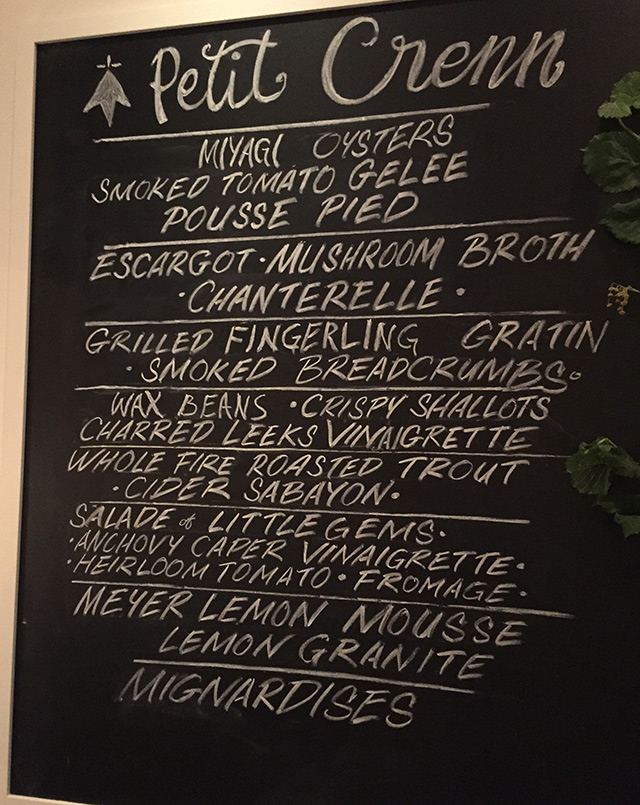 San Francisco is a city in crisis. No no, not the housing crisis, although sure, yeah, that too. But more importantly, even at this very moment, everyday Bay Area residents are being forced

The saga of a San Francisco Sheriff's Department deputy who was caught on tape beating up a homeless guy in a San Francisco General waiting room ended with a conviction Tuesday, after a

—
A Peek At The Menu At Petit Crenn, Opening Next Week
Share this