Shocking news from pleasant Cortland Street on the south side of Bernal — or should I say "Banal"— Hill.

A vigilante with a vocabulary has tagged a new business, Epicurean Trader — or per the graffiti, Epicurean "Traitor for the 1%".

SFist spoke yesterday with store co-owner Matt McDell. By evening, the graffiti was gone and local epicures and gastronomes alike were shopping the store's selection of carefully curated, small-batch goods. Epicurean Trader opened in March as an outpost for artisans with whom the store's proprietors have personal relationships.

McDell was hearted by a positive post on local blog Bernalwood which noted the rudeness of the vandals. However, it did bring out perhaps the biggest flamewar the Bernalwood comments section has ever seen. A negative commenter, who called the vandalism "The best thing to happen in Bernal Heights," was asked to "go away." 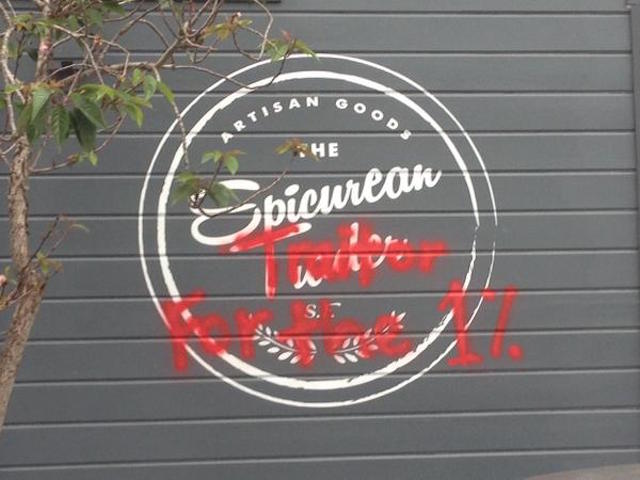 McDell considers himself firmly in the 99%. He's a Bernal local and runs the business with his wife. He's "not going to let this get under his skin," he told SFist, and is "saddened" that someone would choose to make a political statement that has nothing to do with his store.

With Bernal Heights voted the country's hottest neighborhood last year as reported by SFGate, questions abound. Can the neighborhood once known for its communist leanings (it was once nicknamed Red Hill) hold fast to its independent character and politesse as property value soar?

Related: Tired Of Getting Vandalized, Local's Corner Is Closing

Everyone who loves the cheapness of Uber Pool and Lyft Line, take heed: You never know who you're sharing a car with. A cautionary tale came in via the tip line regarding a