Not all veggie burgers are created equal, just as not all meat burgers are created equal, and many a vegetarian and vegan will tell you this. "Compressed patties of yuck" is how SFist's own resident vegetarian Eve Batey describes many of them, including some that are lauded by other publications. So, herewith we bring you the nine best, as we see it, thanks to restaurants around town who take some care to create something more mushroom-y and meaty than your average yuck patty.


The Portobello Burger at Beachside Coffee Bar & Kitchen
As a longtime land-animal-non-eater, I've been burned by the ostensible vegetarian option on a traditional burger menu more times that I can count. Not so at Beachside, however! Theirs is a generous, smoky slab of mushroom with lettuce, tomato, red onion, and pickles, served on a quality bun. If you're feeling adventurous, you can add some peppers to the mix — I, myself, am prone to adding a slice or two of cheddar. Get it with fries and a beer, take a seat outside, and watch the many, various denizens of Ocean Beach do their many, various things. -- Eve Batey
4300 Judah Street at 48th Avenue 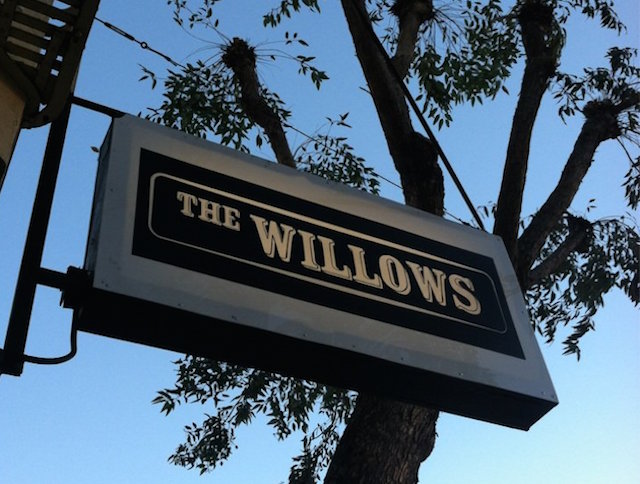 The Sycamore & The Willows
At these sibling spots where the craft beer flows freely and standard orders are pork belly donuts and mac and cheese balls with bacon, there's also a greasy, juicy vegetarian option. Get the fried black bean burger with all the fixins, and be warned: It comes out hot. It's about as health-conscious as the menu gets, and perhaps just as delicious as it does, too. — Caleb Pershan
2140 Mission Street at Sycamore and 1582 Folsom Street between 12th and Norfolk Streets 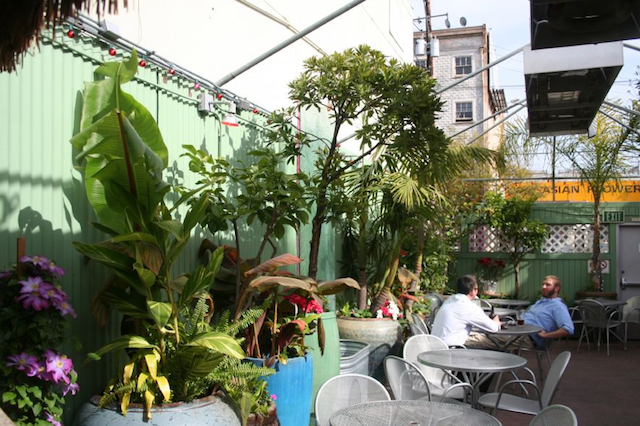 The Grilled Portobello Mushroom Sandwich At Mars Bar
One of SFist's favorite patio bars for multiple years running, Mars Bar is also home to one of our favorite veggie burgers: a portobello burger that's way more than just a big hunk of grilled fungus, proof that even menus comprised of unpretentious bar food can still serve folks who are skipping meat. (If you're not the mushroom type, they have a standard grilled veggie patty that'll do the trick, too.) This mushroom burger is marinated with balsamic vinegar, olive oil and herbs before it's thrown on their grill, making for a tasty blend of fat and acid. It's topped with greens, some great roasted red peppers and Swiss, but Mars has an impressive list of add-on options that make this one a choose-your-own-veg-adventure situation. -- Eve Batey
798 Brannan Street at 7th Street 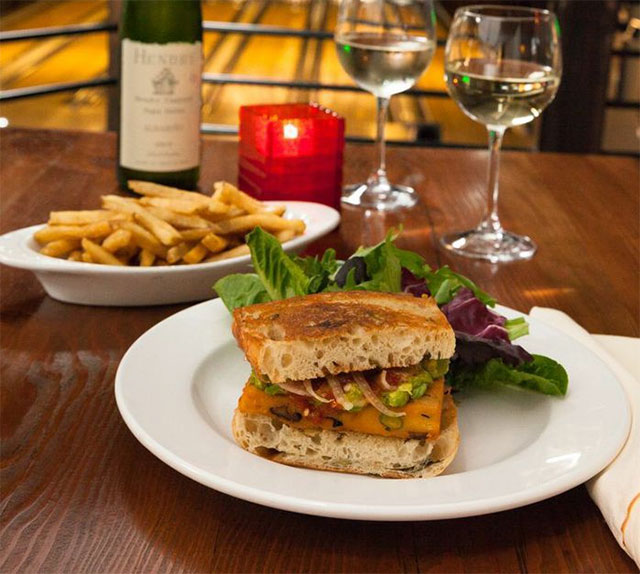 Mission Bowling Club
The vegan burger at Mission Bowling Club is, as SF Weekly put it, "a destination burger," both for its uniqueness among veggie burgers and its deliciousness. Executive chef Anthony Myint and his sous chef Frank Mitchell threw out the veg burger map with this one, choosing to go with a deep-fried panisse patty made with chickpea flour  and omnivore fans of Frances will be familiar with the lovely texture via the panisse frites there. In the mix also, for heft, is kale, edamame, green onion, and roasted shiitake mushrooms, and whole patty is also uniquely square. It comes topped with guacamole, cilantro salsa verde, and a spicy red-pepper sauce, rounding the whole thing out. Definitely not a bland mash or an afterthought, by any means.  Jay Barmann
3176 17th Street at South Van Ness 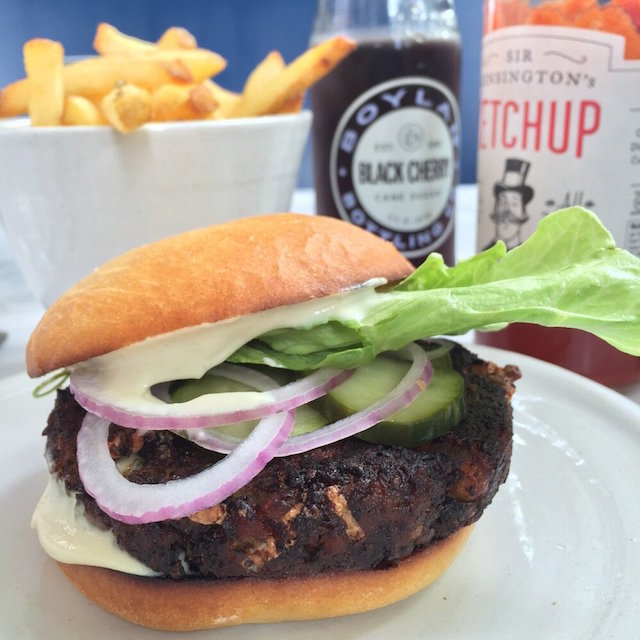 The vegan Veggieburger at Kronnerburger. Photo: Kiku H. via Yelp

KronnerBurger
Among the biggest in a spate of burger openings has got to be the installment of Chris Kronner's KronnerBurger in Oakland after a long, strong pop-up game. Now settled in to his new digs, the menu has expanded to include an exquisitely fried, house-made veggie burger smeared with vegonnaise and topped, like all its brethren, with charred red onions, dill pickles, and crunchy iceberg lettuce. The result: a veggie burger that looks — and makes you salivate — like the "real" thing does. — Caleb Pershan
4063 Piedmont Avenue between Glen Ave & 41st Street, Oakland 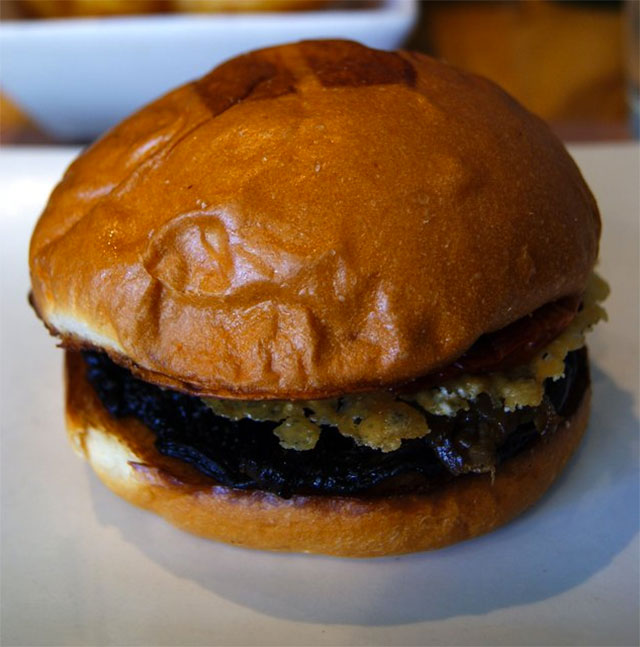 Umami Burger
True to their name, Umami Burger's black-bean-based vegetarian option is umami-rich  and you can even order it styled like the standard namesake Umami burger (pictured), topped with a parmesan crisp, roasted tomato, shiitakes, caramelized onions, and house ketchup. The Black Bean Burger on the menu in both the Marina and SoMa locations is topped with more Mexican stuff, including guac, cotija cheese, cilantro, and pickles, and makes for a satisfying meal even if it doesn't always hold together perfectly. (Vegetarians may want to consider writing some letters of protest, by the way, to get the veggie burger version from their SoCal locations brought up here, which is made with a mushroom blend and lots of edamame, as well as beet juice to give it a meaty look.)  Jay Barmann
2184 Union Street and 242 King Street 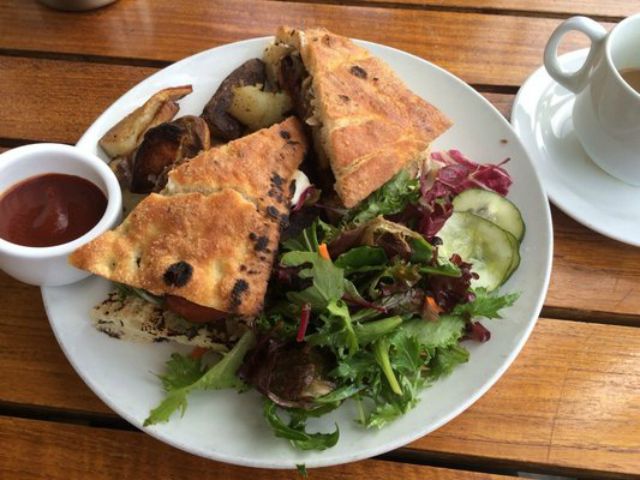 The Plant Cafe Organic
Now with eight locations across the Bay Area (six of those in SF), the many fervent fans of The Plant Cafe's Plant Burger now have more places than ever to enjoy the restaurant's trademarked all-organic patty of lentils, mushrooms, beets, cashews, and bulgur wheat. Best eaten when you're super hungry and on a day where you don't have a lot to do besides digest your meal, this extraordinarily filling burger comes with grilled onions, lettuce, tomato, and vegan aioli on your choice of focaccia, whole wheat sourdough, or Acme sourdough bun. -- Eve Batey
Find a Plant near you here 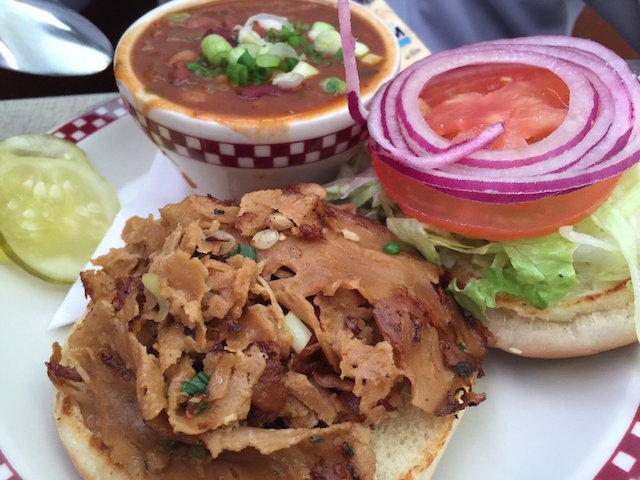 St. Francis Fountain
True seitan-ists worship the Devil Burger at this classic 1918 diner with plenty of vegan and veggie menu options thanks to a 2000 update. The "burger" could almost be classified as a pastrami sandwich with its thin-sliced "wheat meat." If you consume dairy, you're counseled to wash down your meal with a shake. Dinner, sadly, is no longer an option as St. Francis Fountain has started closing its doors at 3 p.m. — Caleb Pershan
2801 24th Street between York and Bryant Streets 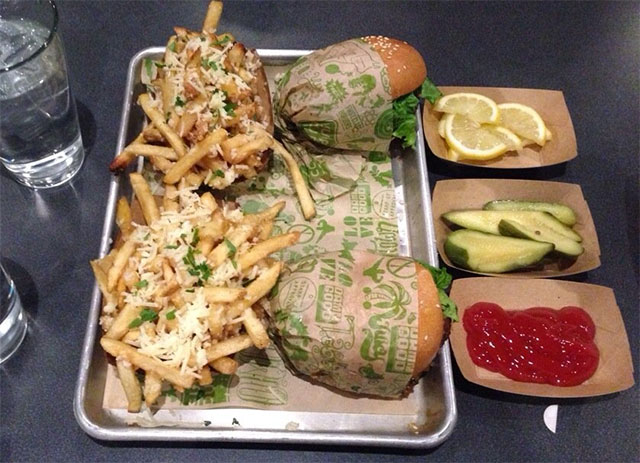 Super Duper
Just like the regular burgers at Super Duper, you can order the veggie option as a double-patty, and you can trick it out with as many toppings as you want, including a fried egg, blue cheese, or whatever, on top of the hummus and cucumber that comes with it. The all-organic patty is made with brown rice, soy protein, rolled oats, peppers, corn, onions, and a bunch of other stuff, and has a good, rich flavor. There's always free pickles, too, and the option of filling up further with garlic fries and/or a milkshake.  Jay Barmann
Multiple locations Liz R. via Yelp

The former location of Abbot's Cellar has lain dormant since the owners, Monk's Kettle, shut down their high-end spinoff in January, gesturing to the minimum wage hike. But betting on the viability of

Shocking news from pleasant Cortland Street on the south side of Bernal — or should I say "Banal"— Hill. A vigilante with a vocabulary has tagged a new business, Epicurean Trader — or per the

—
The Nine Best Veggie Burgers In SF (And Oakland)
Share this