This week's featured housing option  it can't exactly be called an apartment  is a single-room occupancy residential hotel smack in the heart of the Mission which has been advertising its rooms on Craigslist lately. We've seen this elsewhere, like this colorful SRO near Union Square that's been marketing itself to those new to town and not yet able to find a permanent abode. But the Union Hotel at 16th and Mission is something special.

As you can see in the Google Street View shot above, the Union Hotel puts you right between the 16th Street BART stop and a Chinese food/donut place, upstairs from a meat and fish market that I'm sure doesn't smell, and next door to Taqueria Vallarta. No, it's not the halfway decent Taqueria Vallarta on 24th, it's the Taqueria Vallarta people only go to in desperation, or because they don't know any better, because Pancho Villa is like a block away.

In any event, at the Union Hotel, for $80 (and up) per night or $325 per week  the Craigslist ad likely gets attention for the $325 price, which looks like it's monthly until you read on  you will be able to get your fill of tacos, and donuts, and Chinese food, all without the bother of a kitchen, because this is an SRO. There are sinks in each room with both hot and cold running water, according to one Yelper. Some rooms do not have closets.

Also, allegedly, the front desk clerk is a registered sex offender, so there's that.

It should be noted that neither the Craigslist ad nor Yelp has much in the way of photos, because this is not a place that people feel proud enough to be in that they take pictures, or where many people stay who can afford phones with cameras.

Below, the only photo on Yelp of a "newer dresser" and a TV that "has cable." 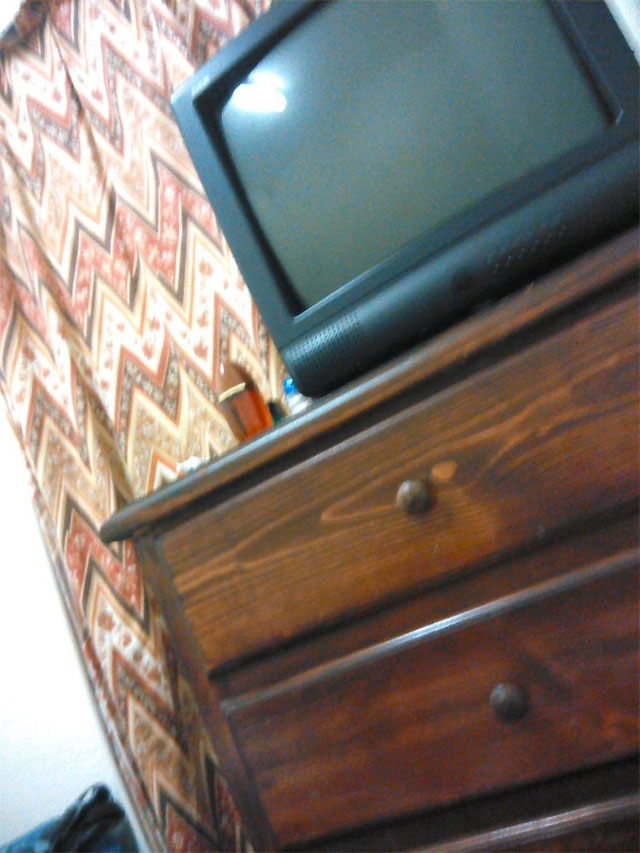 Rooms are cleaned daily or weekly, depending on how many days you're paying for at a time. And one can imagine from the location that your neighbors might be kind of transient. Especially on the 1st and the 15th of the month when a certain segment of the population receives certain checks, and decides to party.

Bathrooms and showers are shared, and cleaned daily. There is also a "common area microwave," but no refrigerators. These kinds of indignities might not be that bad, on a temporary basis, if this were not 16th and Mission.

One fellow who stayed there as recently as last summer said that the place is "really clean" and safe, however he recommends shower shoes and disinfectant wipes for the toilet seats.

Seriously, though, more than most of the horror shows I've highlighted in this column, this is a place where, if you land here, you really have to take some stock of your choices. It seems like on Hotwire you could probably find a legitimate hotel by the airport for $90 a night, and/or there are likely dozens of places on Airbnb less royally sketchy than this for the same price. (Maybe in 2012, when it only cost $40 a night, there was a greater value proposition here.) Unless your dealer lives upstairs from the Chinese food/donut place next door, or unless you are doing some kind of investigative report on the 16th and Mission BART plaza, there does not seem to be any reason that a non-addicted, non-sex-offender, employed person should find this as their only option. It's the kind of spot where someone on the cusp of entering a 12-step program hits his rock bottom while watching a marathon of Family Guy and soiling himself. It is also the kind of spot that should make one question whether staying in San Francisco is really that important, after all.

In the absence of any more photos to look at with our mouths open, I'll leave you with a few choice quotes, from Yelp.

"The entrance stairs have stinky carpet and sometimes street or cooking smells or cigarette smoke fill the air in the halls."

"Some of the guests are not the most refined people in San Francisco."

"The plumbing, lighting, heating, and other services all work."

"The rooms have an ungodly odor -- one which I can only describe as perhaps crack, opium, or heroine.[sic]"

"There are dozens of zombies lurking just feet outside the door."

"The sheets/towels they give you may be clean, but they do not LOOK clean."

"I saw a mouse go under the door of someone's room one night when I came back late and for each day that I was here I have seen one or multiple roaches (small to medium sized ones, but a roach no less). A mouse came into my room late at night as well."

"If you have no last resort it is a doable option, just make sure you are burning incense 6" away from your face at all times."

"You must not mind the smell of Indian cooking or incense."

"I kept finding other people's hairs in various places of the room."

"I wish I could give more than two stars, I really didn't mind my stay at the Union. But it is what it is."

Good drinks tell a story, and this is the story of those drinks. Here, we'll be serving up a remedial cocktail lesson for bartending beginners to help you get the most out of

Two pedestrians were struck and injured by a driver as they crossed a dangerous Panhandle intersection against a red light. According to Bay City News, two men were running across the intersection of

—
Apartment Sadness: A Mission SRO For Just $1300 A Month
Share this