Hundreds of protesters splintered from the planned Dyke March route on Saturday to protest changes made to this year's march. It was an act of defiance "in solidarity with the Black Lives Matter movement and in protest against the displacement of people and queer community institutions in San Francisco," according to a draft of a press release sent to SFist and later retracted. Following the march's old route, the splinter group overwhelmed a police barrier at 18th and Guerrero Streets and later closed the intersection in front of the Lexington Club, a bar whose closure this year has been taken as a symbol of San Francisco's vanishing queer spaces.

Of course, before any any of this happened, Pride-goers and Dyke Marchers spent a sunny morning in Dolores Park. 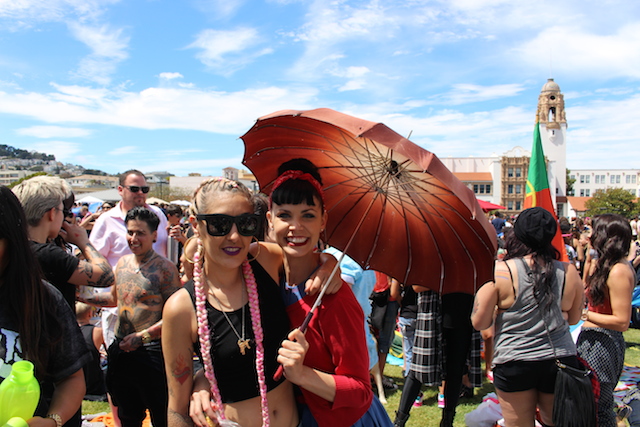 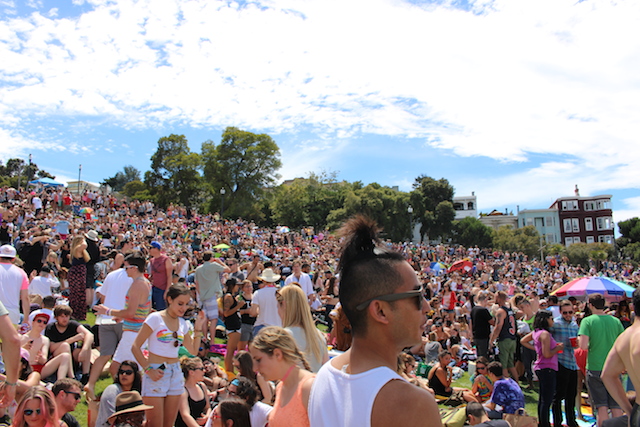 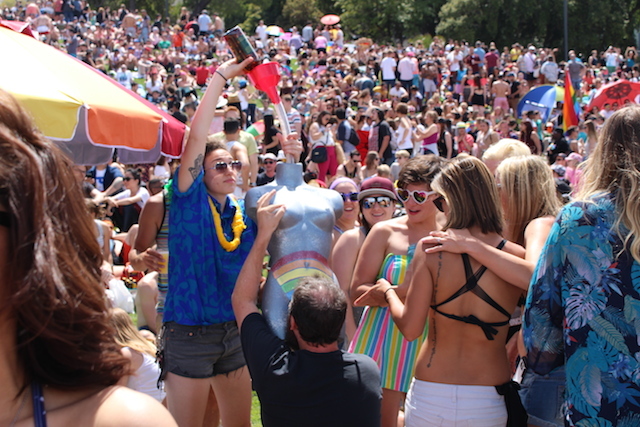 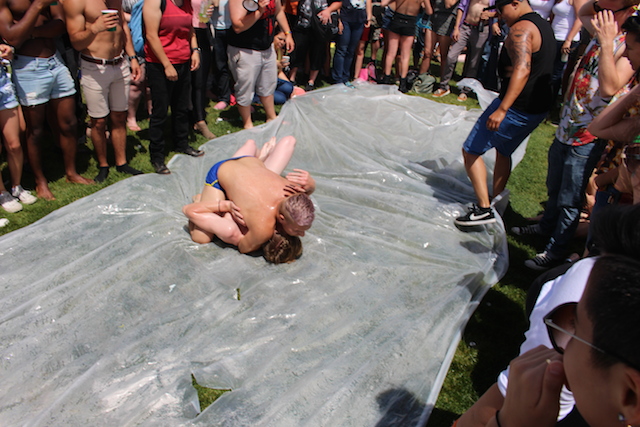 From there, though, Violet Blue reports that Dyke March organization fell apart. The problems began, she says, when leadership "decided to start the Dyke March 2 1/2 hours early." This year, of course, organizers weren't working with the Sisters of Perpetual indulgence to coordinate Dyke March and the Castro's Pink Saturday, or rather, this year's "Pink Party" substitute from the new management of the LGBT Center. According to Blue, Dyke March leadership "ranted on the microphone about how they were saving the Dyke March, and talked shit about the Sisters, which was really fucking classless and disrespectful. They spoke as if they were going to run it form now on. Then they said, let's march."

On its website, the Dyke March Committee explained that a new route (north on Dolores, east on 17th, north on Valencia, and west on 16th) was a logistical concession. And there were plenty of people on the new route! However, as Blue writes, "The Dykes on Bikes revved their engines, parked around the corner from where they traditionally park, now out of view of Dolores Park. There were much fewer than usual. The new organizers started the march. And everyone was completely confused." 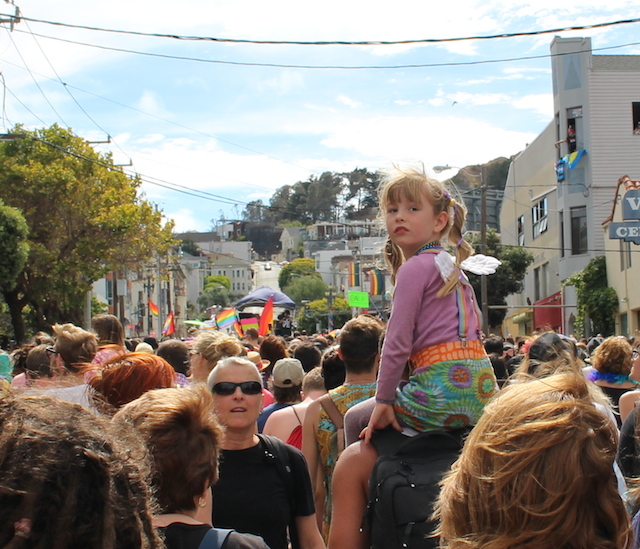 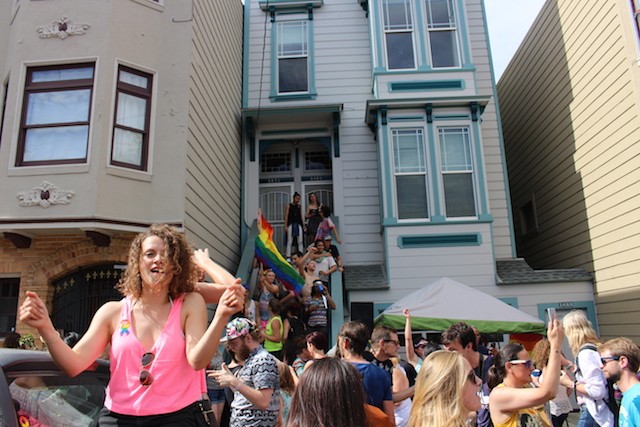 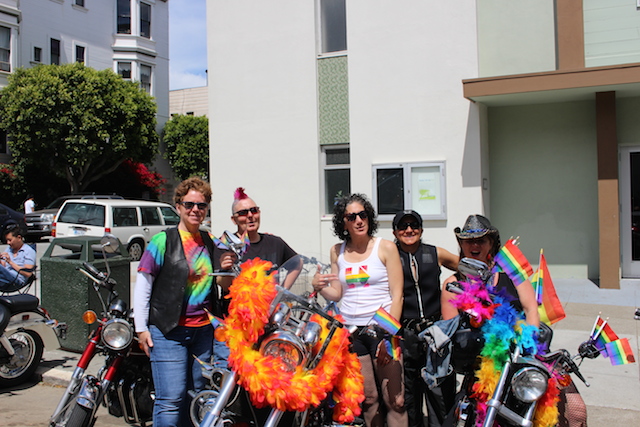 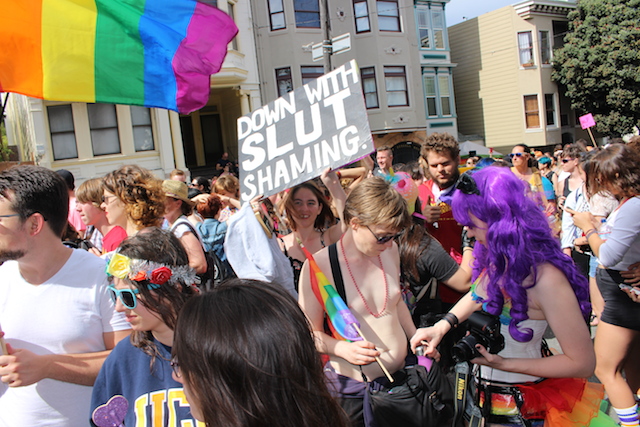 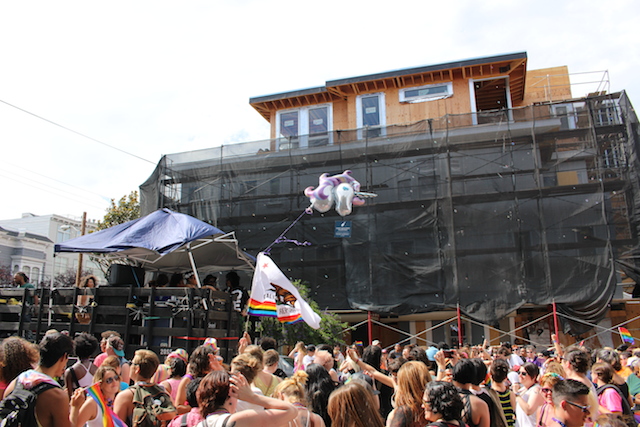 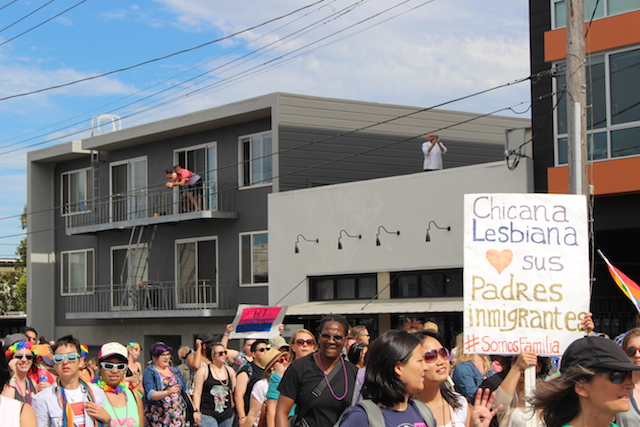 Here's a video of the front of the "official" march, just after the Dykes on Bikes. The number of marchers was far less than previous years due to all of the above, and this contingent dwindled within minutes.

At a police barrier along the traditional Dyke March route at Guerrero and 18th Streets, Blue "saw a wall of dykes, marching. Through the cops, who decided there were too many to stop. (I have it on good authority one of the cops actually high-fived one of the marchers.) They were chanting. They were powerful. They were angry, and it was a righteous anger. They were taking back the Dyke March."

Here's video of that, shot by Wendy Goodfriend.

For more background, here's the language from that retracted draft of a press release:

The splinter march will follow the original protest route, reclaiming Dyke March as a political action, centered in radical politics and solidarity with Black Lives Matter, the displaced families of San Francisco and Queer and Trans People of Color. The decision to change the route comes in the midst of an affordable housing crisis, radical demographic shifts in our neighborhoods and on the back of several recent city decisions to defund eviction defense and increase funding for police at a time in history that demands more accountability for marginalized communities. The dyke community in San Francisco is bound up in a larger struggle for racial justice and will position itself in solidarity with the larger historical moment. Being queer means fighting all oppression; homophobia, racism, misogyny, transphobia, state-sanctioned police violence, and a culture of white supremacy and patriarchy. We will not stand silently. In solidarity with all marginalized and oppressed communities, we march.

As Blue also notes, this year's Pink, er, event, came to a close four hours earlier than usual. That pushed Dyke March earlier and prompted Blue to write that "If you’ve ever been to Pink Saturday, or you know anything about it, you know that this makes no sense, and it flies in the face of why being in the Castro on that night (night in particular) is important."

This is what the neighborhood looked like by 11:30 p.m.

Meanwhile there was news of some action at the Lexington Club. By 7:30 p.m. the intersection of 19th and Lexington Streets had become the site of another Dyke March splinter action. As Uptown Almanac witnessed, a group of around 60 gathered to pay their respects to the lesbian bar and protest its closure, not to mention the foreclosure of spaces like it, with signs noting Pride's history as a protest. 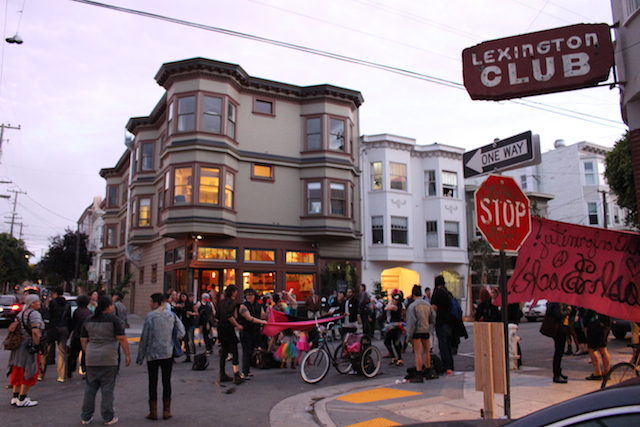 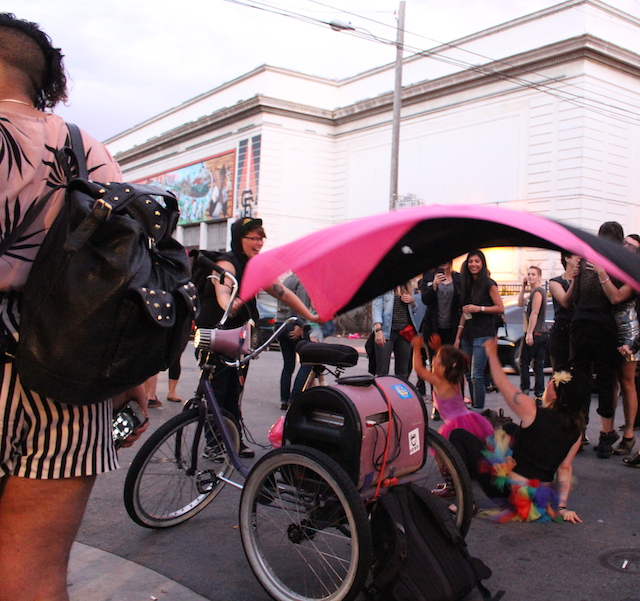 Closing the street with a dance party, the protestors even confronted police.

Shit got tense at the Lex. She hit the officer with the flag a few seconds before this though. #SFPride pic.twitter.com/75nHSDiW7A

But despite tensions, the cops left without making arrests and the impromptu, un-permitted block party resumed.

In fact two arrests were made, documented by the Lexington Club Archival Project. 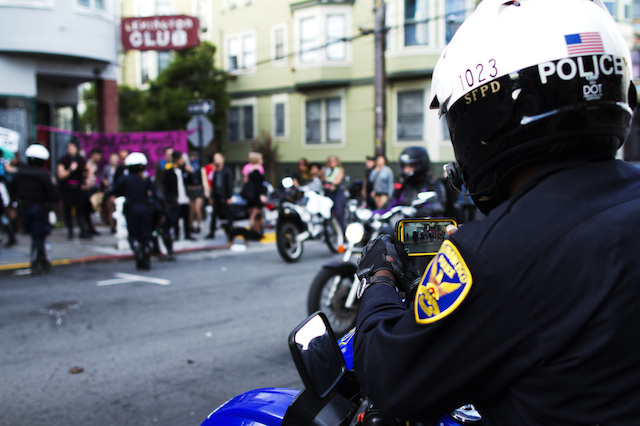 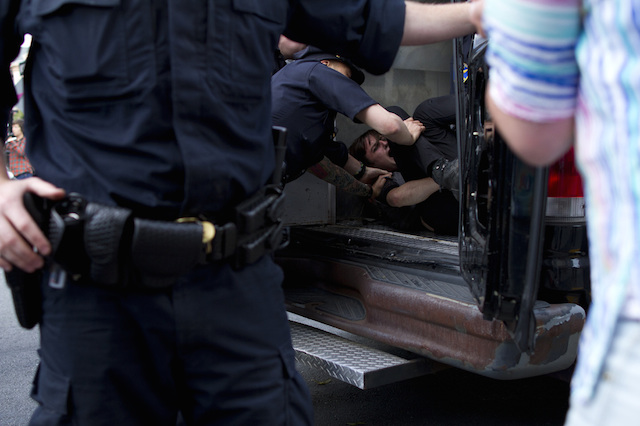 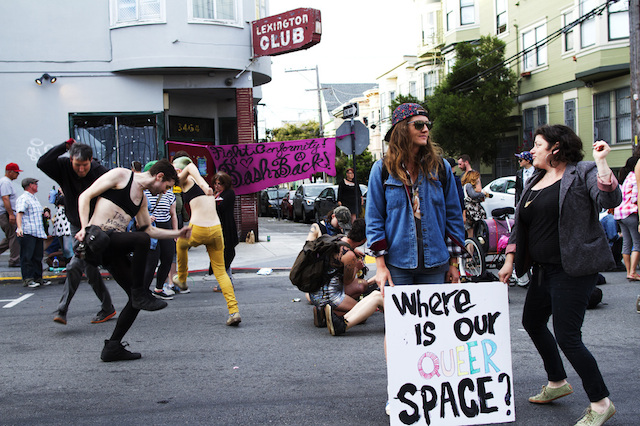 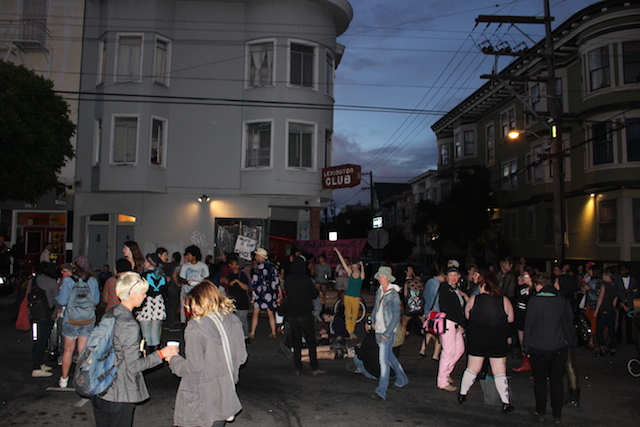 Complaints about the increasing heteronormativity of the event aside, and despite a handful of arrests for public drunkenness and a couple of handguns seized, Sunday's LGBT Pride Parade was a largely peaceful, altogether

Though San Francisco Police Department Chief Greg Suhr told the Chron that Sunday's Pride celebration and parade was "off the hook," he didn't mean that in an law-breaking way — the event that he