"Never underestimate the power of a pissed-off drag queen,” Sister Merry Peter shouted through her megaphone, addressing more than 150 assembled protestors at Facebook headquarters Monday morning. The ragtag band of privacy advocates, LGBTQ activists and drag queens dragged themselves down to One Hacker Way in Menlo Park to rabble-rouse against the Facebook "real names" policy that they say discriminates against communities that have legitimate reasons for using alternative names.

For its part, Facebook cleverly put out the "rainbow version" of its corporate logo signage (see above), knowing that protesters would inevitably pose for pictures in front of it. Facebook employees, who rolled in at 11 on a Monday morning, all honked and waved supportively to the protestors. This did little to undermine the #MyNameIs hashtivists’ claim that Facebook is indifferent to their communities and enables targeted bullying of disenfranchised populations. 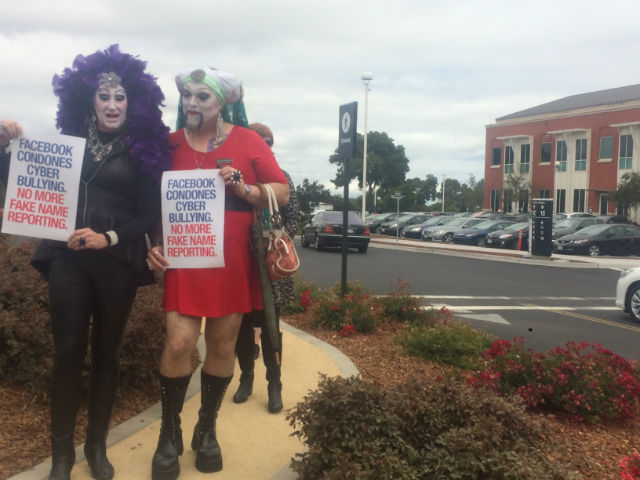 “Facebook needs to immediately end the ‘fake name’ reporting option. It is the only option that punishes identity, not behavior,” organizer Sister Roma told the crowd. She noted that this policy does not just affect Sisters of Perpetual Indulgence and drag queens, but also “survivors of domestic violence, Native Americans, bullied youth, schoolteachers, mental health care professionals so many people who use alternative forms of names or identification on Facebook that are legitimate and authentic.” 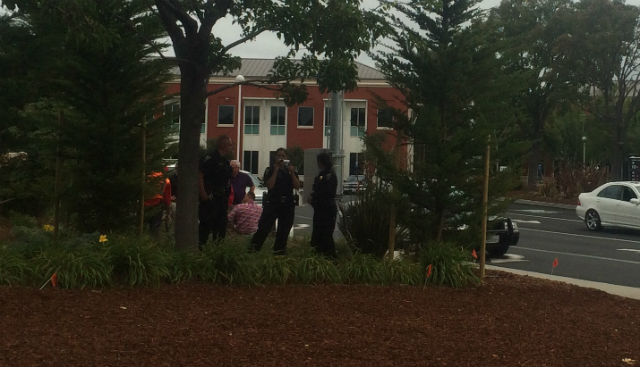 A few Menlo Park police were on-hand, recording the protest and ensuring it stayed off the Facebook campus. (Shuttle buses carrying protestors were allowed to park briefly on the Facebook lot.) The establishment was also represented by SF Supervisor David Campos, who addressed the crowd in protest of the Facebook policy. "We are tired of hearing the right thing from Facebook, and yet nothing happens," Campos said.

Campos refers to Facebook’s October 2014 apology and so-called policy reversal following initial pressure over the ‘real names’ controversy. But the policy reversal only applied to a few high-profile SF drag queens, not the whole Facebook community. “We thought that everybody was granted their names back, but it wasn’t that,” protestor Queen Dilly Dally told SFist. “They had more quieted the community of San Francisco. They gave us our names back and apologies. And then over the past six to eight months we realized it was still an ongoing epidemic.” 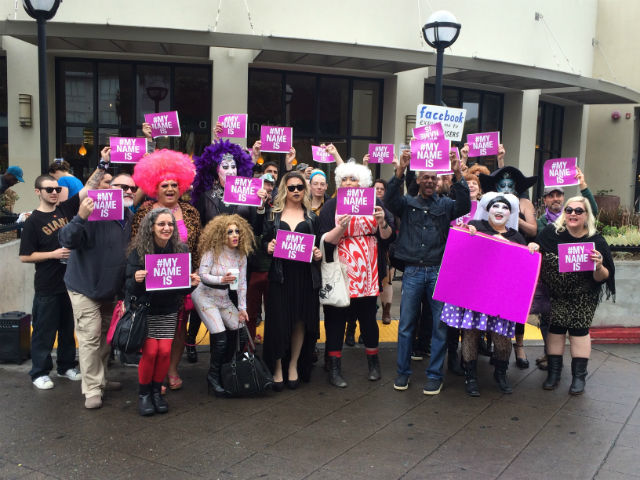 It’s not just a drag queen epidemic, it’s an epidemic affecting numerous populations on Facebook. “Domestic violence survivors live in the shadows, because we have so much shame,” said co-organizer Trisha Fogleman. “We have to protect ourselves. But we still want to be connected to community and to people that we love.”

“I really urge Facebook to get rid of the reporting policy, get rid of that button,” Ms. Fogleman said. “Because it hurts people. Us being our authentic selves hurts no one.”

Native Americans also find themselves disproportionately affected by the real names policy — even when using their real names. “My family’s last names are Still Night, White Swan, Perkins, Jordan and Bollen,” said cultural activist Samuel White Swan-Perkins. “I want [Facebook] to know that our ancient naming conventions predate their creation. We hold more power in our names than any algorithm.”

We’re already seeing political dissidents outed via the Facebook ‘real names’ policy, which in some countries can constitute a death sentence. “We already have Sisters in the Ukraine trying to to bring gay rights to the fore of the Ukrainian revolution,” Sister Merry Peter told SFist. “We have Sisters in Uruguay who are stalked by death squads because they are taking on the oppression of the Roman Catholic church. Outing their real names on Facebook puts them in serious danger of mortal harm.”

The outing of dissidents on Facebook has already hit home, according to San Jose Bike Party member Andrew Boone “A lot of people don’t use their real names because we’re criticizing government officials for inaction,”Boone told SFist. “We’re not doing anything radical. We just want bike lanes.” 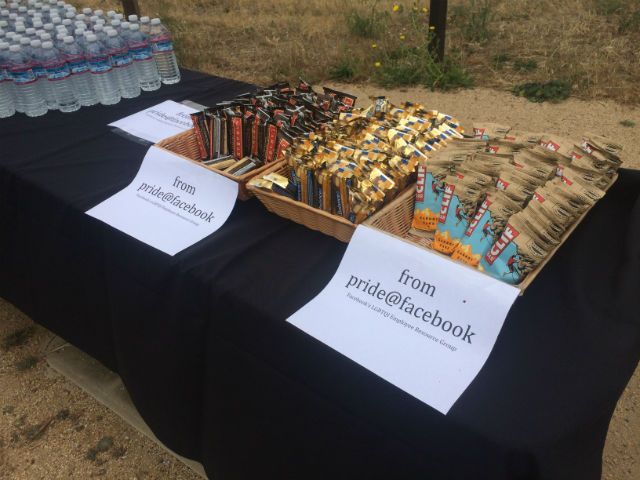 Facebook put out snacks and bottled water for the protestors, courtesy of the Facebook LGBTQI Resource Group — an obvious attempt to quell criticism of Facebook’s SF Pride sponsorship. “Jesus Christ, people!” yelled one dismayed protestor at other protestors who took the snacks. “Haven’t any of you heard of Persephone?,” she said, referencing the mythological Greek heroine who was lured into the underworld with a few tasty pomegranate seeds.

Sister Roma encouraged the crowd to shame Facebook if their Pride sponsorship is permitted without a policy change. “Turn your backs. Make a point. Do whatever you feel is necessary,” Sister Roma said. “To the LGBT employees of Facebook, I would urge you to realize that this policy is harmful, to start making change from the inside out. We need your support. Stand up for your community.”

A new report released Friday breaks down the housing numbers that would be impacted with a Mission development moratorium. [Examiner] Remember the case of Tom Smith, the BART Police officer who was accidentally