When Kasey Smith would walk to the advertising agency where she used to work, she would pass "no fewer than ten" old painted signs on the sides of buildings. Known as ghost signs, they're often faded or covered in graffiti in a sort of urban palimpsest.

Ghost signs are well-named: They're holdovers from a different time in city life, usually advertising products or places that no longer exist.

Smith says she developed an attachment to a couple of ghost signs she passed habitually. Here's one of them, located near the intersection of Larkin and Post Streets. It's an advertisement for a meatpacking company, the Patek-Ecklon Division of Durham Meat Co.

Another, for Zubelda Cigarettes, "The Double Package," can be found near the intersection of Larkin and Geary Streets on the side of a 1909 building. Zubelda, Smith notes, debuted in October 1912, giving us a clue as to when the sign was first painted. 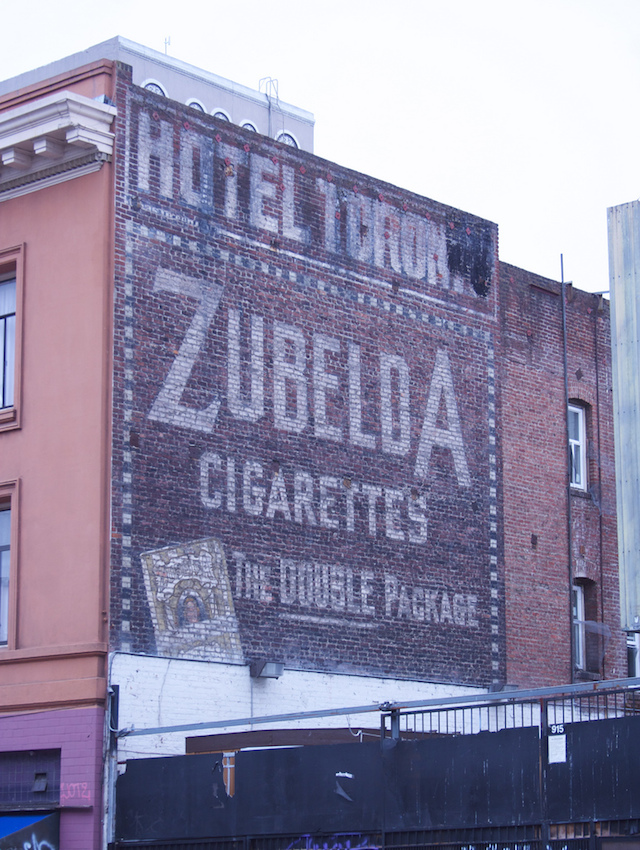 To share her work, which began in 2011, "Eventually I decided to provide a navigable map to these ghost signs and the San Francisco Ghost Sign Mapping Project" Smith writes.

"San Francisco’s post-earthquake reconstruction took well into the 1920’s to complete," Smith explains, "creating the perfect scenario for ghost signs to become obscured between and behind successive waves of new development. While most signs wedged between buildings will be lost in time... those hedged into the newly formed (at the time) backyards of adjacent buildings are often accessible using modern internet tools — namely Google Satellite View and Google Earth."

Smith keeps a log of some of her interesting discovers at Perception Filter, and below you can see her in-progress but already very thorough Google Map.

Google, Smith writes, is "both a mapping platform and a research tool" since many ghost signs lie hidden in unexpected places. One example, writes Smith: "572 O’ Farrell Street - which contains an MJB Coffee sign on it’s Geary-facing side — was constructed immediately post-quake in 1907... [T]he sight lines to Geary weren’t blocked until the construction of 669 Geary in 1922." Every once in a while, she tells SFist, friends will send her a new one — often when buildings are torn down to reveal what was once visible. Currently, her goal is to redo some of the photography and put together "a very visually intensive website and small print book."

Related: The Seven Most Haunted Places In The Bay Area

There's a new drinking and eating establishment to put on your radar in the Russian Hill environs: House Rules (2227 Polk Street), brought to you by the chef-owner of Hog & Rocks and

With wedding season kicking into full gear and June Gloom arriving early, it’s the perfect time for a singleton in San Francisco to get a bad case of loneliness. If watching another

—
The Ghost Signs Of San Francisco, Mapped
Share this