As we navigate the storm-tossed seas of life and the internet, it's with an oceanic depth of "feels" that we recall Rubbish, the rescued sea lion who last week gave us a glimmer of hope while calling much-needed attention to the plight of his kind when he was found hiding under an SUV in the Marina District.

Indeed, Rubbish is but one of 1,000 sea lions treated this year at the Marine Mammal Center, which has recently updated the public on his condition. Currently, Rubbish, who is under a year old, is being fattened up and restored to health.

The Center also clued us in to his unusual moniker: "Rubbish" is so named for the Briticism frequently used in the "Harry Potter" series, books that have served as a naming theme for many sea lions at the Center. But here's the heartbreaking part. Rubbish was actually named in February — when he was first treated by the Marine Mammal Center.

Yes, Rubbish has been in treatment before, the poor dear: He was first rescued months ago by the Santa Barbara Marine Mammal Center and brought to the Marine Mammal Center in Marin for care. At the time, "Rubbish was just eight months old and severely underweight," the Center says. He was eventually released back into the wild, like 175 other California sea lions the center has treated and sent off. But unlike around 80% of them, he didn't fare well. After spending just 5 weeks on his own, Rubbish had lost 17 pounds and was found waddling around Divisadero Street.

According to the Center, "Rubbish’s admit exam following his stranding last week confirmed that he is once again malnourished but did not indicate any further health issues. He is currently being fed herring several times a day and competes well with the other sea lions in his pen."

According to experts, warm waters along the West Coast — the result of Climate Change — have affected food availability for nursing sea lion mothers and their pups, the driving force behind crises like Rubish's. “What’s scary is that we don’t know when this crisis will end,” says Dr. Shawn Johnson, who is Director of Veterinary Science at the Center. “This could be the new normal—a changed environment that we’re dealing with now.” Let Rubbish, then, be a mammalian reminder of our larger, planetary struggle, and let us never forget him — or it.

To quote at length from the writer Aldo Leopold, who once looked into the eyes of a dying wolf,

We reached the old wolf in time to watch a fierce green fire dying in her eyes. I realized then, and have known ever since, that there was something new to me in those eyes - something known only to her and to the mountain. I was young then, and full of trigger-itch; I thought that because fewer wolves meant more deer, that no wolves would mean hunters' paradise. But after seeing the green fire die, I sensed that neither the wolf nor the mountain agreed with such a view. 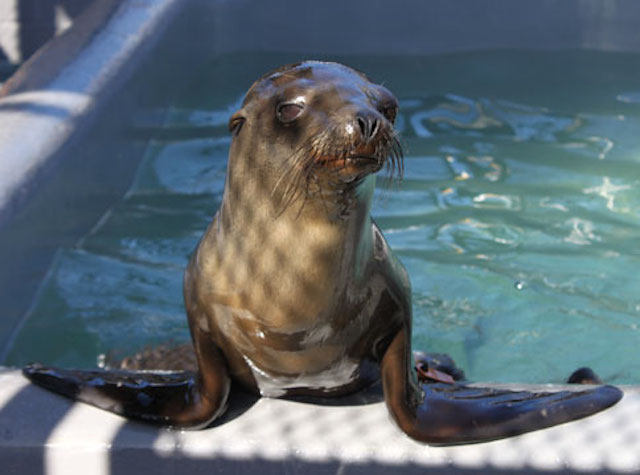 via the Marine Mammal Center

This week's edition of Apartment Sadness came in via the tipline from some apartment listings in the Stanford University classifieds. Thus, we don't have a link to share, but needless to say if

Left this one at Ocean Beach this morning. The design didn't come out how I intended, but what in life does? 😉 #frpart #sand #oceanbeach #ocean #sfarts #mandala #sandart #art #letgo #gowithit #cliffhouse A

—
Video: Crucial Update On 'Rubbish' The Wandering Sea Lion Pup (And His Checkered Past)
Share this