Remember this tiny 265-square-foot TIC from the other week that was asking $425K? Well, a barely larger unit, but an actual condo, that clocks in at 291 square feet on Howard Street in SoMa just sold for $415,000  and it only had an asking price of $299K because it has a kitchenette and a Murphy bed!! As Curbed tells us, it commanded 39 percent over asking, with the buyer paying all cash, because everything is crazy, and tiny living is chic, I guess.

There is just one tiny closet, and a mini-fridge. And the buyer had better own pretty much nothing and only two pairs of shoes.

Just to reiterate, THAT IS CRAZY.

To put it in perspective, condos in the stylish, Stanley Saitowitz-designed 8 Octavia, as featured on Looking, were going for around $1,200 per square foot, and the fancy condos in the city's largest ever TIC, atop Nob Hill, were going for $1,500. But they were not, obviously, quite so tiny.

And according to Trulia, the average per-square-foot price in notoriously tiny-apartment-filled Manhattan is currently $1,472.

Another view, with Murphy bed folded up, below. 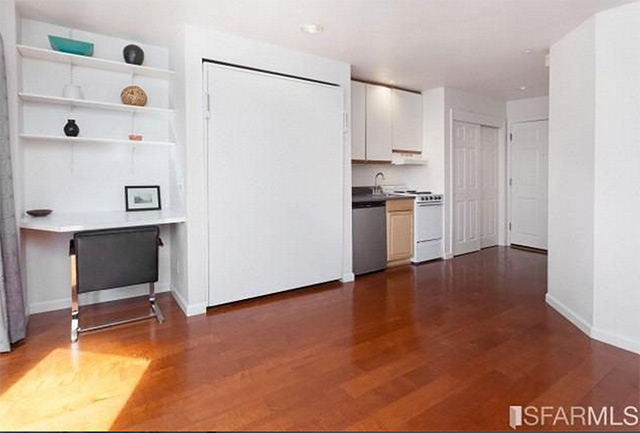 After a feud with the building's landlord, the owners of Place Pigalle are closing their bar on May 10th. The establishment has seen dramatic changes in its surroundings since it opened back around

Major pizza news today: Popular Neapolitan pizza truck (with on-board wood oven) Del Popolo is going to get its own permanent home on Nob Hill, at 855 Bush Street between Taylor and Mason.