Few comfort foods stir America's heart and soul like fried chicken, which is a keystone dish in American cuisine whether you hail from the South or not. Ask any vegetarian and they're likely to name it, along with bacon, as one of the meat-foods they miss most, and ask any Southerner what they judge a cook by, and they'll probably say fried chicken. San Francisco hasn't always been a bastion of great Southern or soul food, but over the last decade or so we've collected over a dozen spots where the fried chicken can be counted on to be crisply fried and uniquely delicious  though opinions are probably going to fly about the relative inferiority of one bucket/plate versus another. And please be advised, we are not snobs  Popeye's is delicious, but it's not a local chain so they're not on here.


Brown Sugar Kitchen
People don't only go to Brown Sugar Kitchen for their chicken and waffles, but almost. Formally, French-trained chef Tanya Holland opened her West Oakland spot to immediate lines in 2005, and the chicken, and the waffles, truly are perfect. Holland has said she wants to "do for Southern cuisine what Mario Batali did for Italian food  elevate it from mom-and-pop meals with more refined sauces and fresh seasonal ingredients." And word about Holland's chicken has spread far and wide (Oprah included), and you can learn all the secrets to her batter right here, or you can save yourself some spatter and just head over there to try it from her kitchen.  Jay Barmann
2534 Mandela Parkway, Oakland 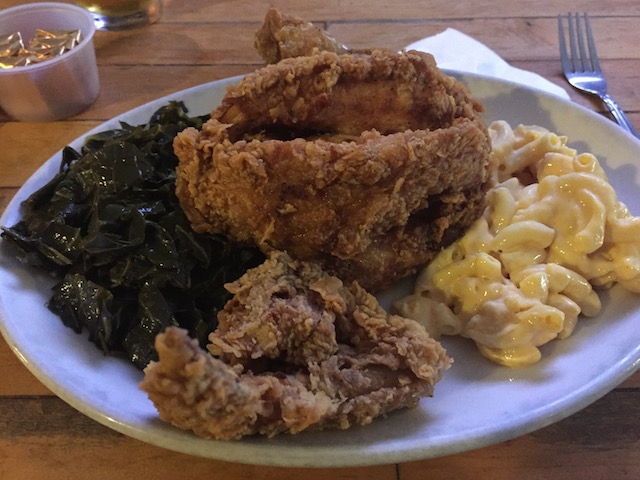 Hard Knox Cafe
The chicken at these quirky comfort food outposts, cooked until its exterior is a dark golden brown, will make you believe in fryer vat miracles. That is, if you weren't a believer already. Note that there's a spicy option for those who crave a little kick. Corn bread comes out first, and everything is super laid back and casual. Don't expect the fastest service, but in return, you're welcome to linger. —Caleb Pershan
2526 3rd Street between 22nd and 23rd Streets and 2448 Clement Street between 25th and 26th Avenues 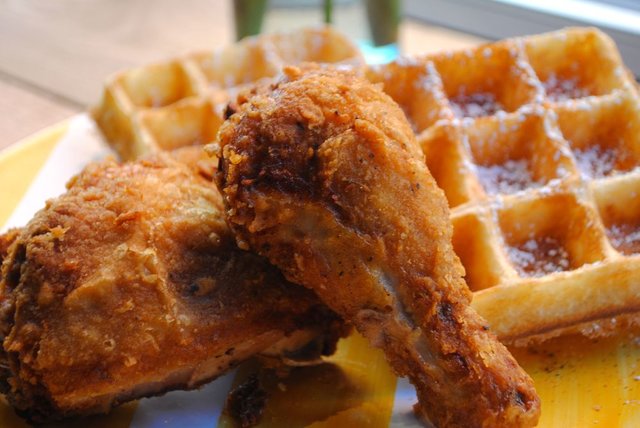 Photo courtesy of the restaurant

Little Skillet
An offshoot of restaurant Farmer Brown, Little Skillet is literally a window along a wall where die-hard fans order fried chicken and waffles, and then devour their purchase in an alley. Sound perfect? It is. Those just in it for the perfectly fried chicken can order a meal sans waffles. Sides include biscuits, mac and cheese, and the highly recommended cheddar grits. Don't lie. You know you want to eat chicken and grits in an alley surrounded by your fellow SoMa skillet fans.  Beth Spotswood
360 Ritch Street near Townsend 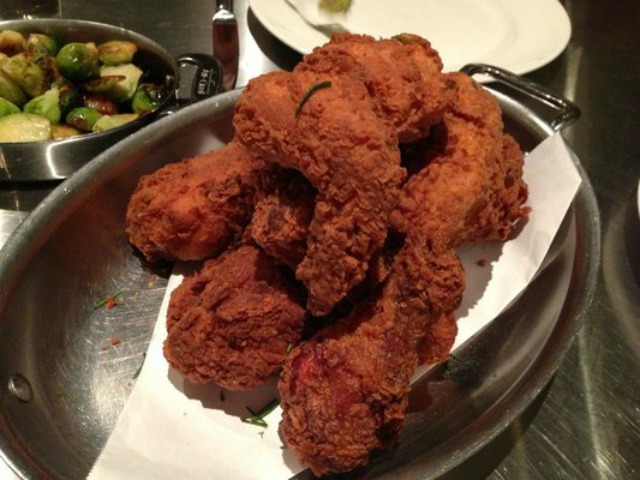 Ad Hoc
Many folks will tell you that a craving for Ad Hoc's buttermilk fried chicken is one of the main reasons they bought chef Thomas Keller's cookbook 'Ad Hoc at Home'. Brined in lemons, honey, and other spices for nearly a day, Ad Hoc's chicken gets a buttermilk bath and a spicy coat of seasoning before its dip in the frier. The result is an amazingly crisp crust covering intensely flavorful, juicy meat. It's the stuff chickeny dreams are made of. One warning before you hop in the car and head to Yountville to taste for yourself: as Ad Hoc only serves a four-course family-style menu that changes on a daily basis, you can't get their chicken every day. However, their boxed lunch to-go service Addendum (in the backyard) offers the chicken Thursdays through Saturdays, from 11 a.m. to 2 p.m. Plan accordingly. -- Eve Batey
6476 Washington Street in Yountville 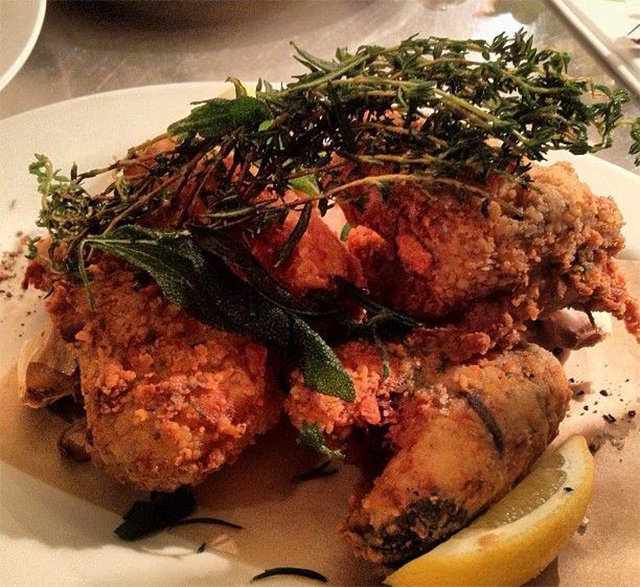 Wayfare Tavern
Tyler Florence's take on "restaurant-style" fried chicken is nothing to scoff at. Brined and thinly battered with well seasoned buttermilk batter, and garnished with roasted garlic, salt, fried herbs, and lemon, it's decidedly one of our fancier examples, and pricier at $25 a plate. But it's damn good. "Ridiculously good," as Food & Wine has called it. South Carolina-born Florence has kept the fried chicken front and center on the menu of his tony FiDi haunt since it opened in 2010, and it remains, easily, some of the juiciest, and most flavorful in town.  Jay Barmann
558 Sacramento Street near Montgomery 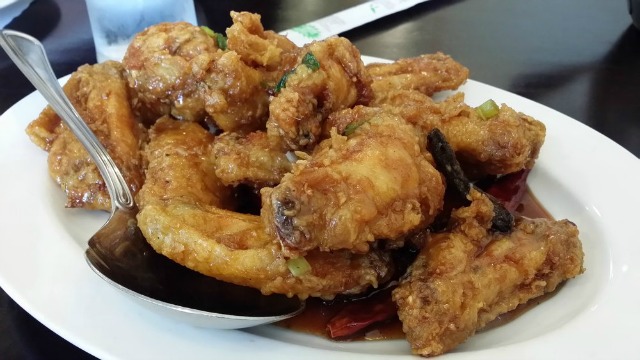 San Tung
Inner Sunset Chinese joint San Tung is known for two things: long waits, and their dry-fried chicken wings. And, yes, the two are connected, as people come from all over for the chicken that we've written about so many times over the years that it might be dubbed the Gavin Newsom of food. (And like our former mayor, the service at San Tung can be..erratic, though their dining room is far grittier than Gavin could ever hope to be.) Named by esteemed food pub Food & Wine as some of the best in the US, San Tung's dry fried wings (they have a wet fried option too, but it's not that great) combines garlic, ginger, and roasted red peppers in the batter for a concoction that even the restaurant admits "doesn't sound like typical Chinese fare" but is instead a "mix (of) American comfort with Chinese cooking expertise." Who cares, it just tastes fantastic. And if the line at San Tung's too long, you can go get a drink or check the wait at San Tung 2, which is right next door and serves the same food as the original. -- Eve Batey
1031 Irving Street (#1) and 1033 Irving Street (#2), both between 11th and 12th Avenues 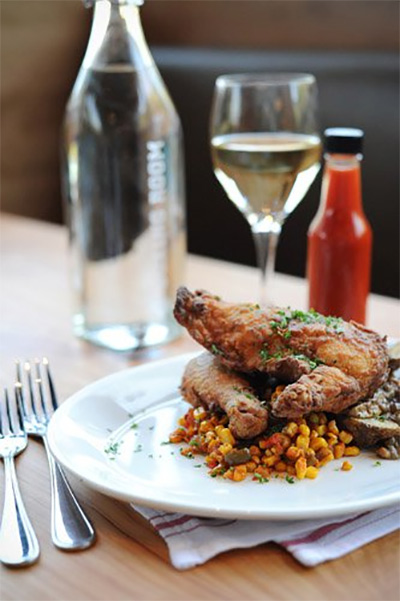 Boxing Room [Now closed]
Chef Justin Simoneaux, a New Orleans native, has one magical, secret weapon to serve alongside his darkly fried, crunchy and delicious fried chicken: bacon giblet gravy. The combination with his always moist and picture-perfect fried chicken, is the stuff Big Easy dreams are made of. Bonus: This man knows how to make a proper hushpuppy. Double bonus: The place finally, recently added a full liquor license, so this NoLa-centric spot can do NoLa proud with cocktails. -- Jay Barmann
399 Grove Street at Gough

Front Porch
We've all agreed that food tastes better when it is pulled from a bucket of popcorn, shrimp, popcorn shrimp, and of course, fried chicken. One of the few spots one can procure chicken in a bucket without having it handed through a car window is at the Mission's Front Porch. The Front Porch is home to some seriously juicy cornmeal-encrusted friend chicken, piled high and deep in a cardboard bucket and dramatically presented tableside. Wimps can order a meager 4-piece plate, but few things say long-term love and overall health like a shared 10-piece extravaganza of fried legs and breasts. Beth Spotswood
65 29th Street between Mission and San Jose 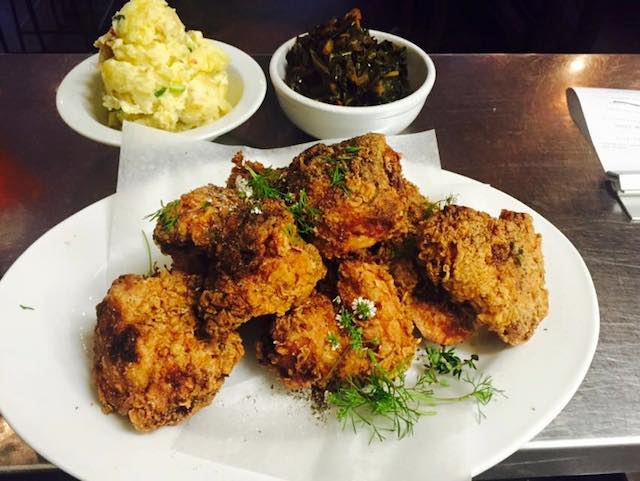 Miss Ollie's
Sarah Kirnon, who came to the Bay from London in 1999 and worked initially at Front Porch, opened her casual Caribbean-California restaurant to happy customers and positive press in 2013. The place is an homage to her grandmother, Miss Ollie, and the fried chicken is the odds-on highlight. Of course it's crispy on the outside, but it's also got a secret: skin stuffed with vinegar and herbs. Traditional — and also highly affordable — other dishes include phoularie, fritters made from split pea flour and turmeric and a pickle plate to complement whatever else you've ordered. —Caleb Pershan
901 Washington Street Oakland between 9th and 10th Streets 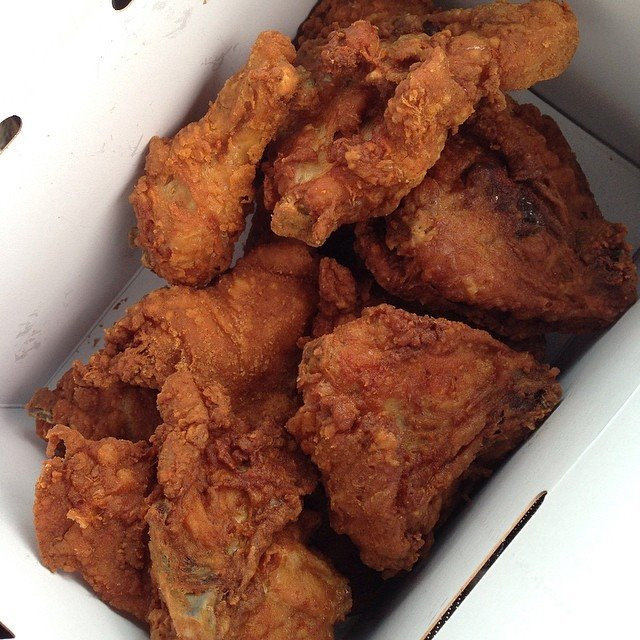 Pollo Campero
Guatemala-based, Central American chicken chain Pollo Campero opened their first Northern California location in the Mission just over two years ago, and if you haven't been, you need to go. You will not find a lot of English speakers in the dining room, but what you will find is some delicious, well seasoned, fast-food chicken that certainly rivals KFC, if maybe not Popeye's. Also, this is the cheapest fried chicken on this list, and it is damn good  with optional sides like yuca fries, rice and beans, and sweet fried plantains with sour cream.  Jay Barmann
2740 Mission Street between 23rd and 24th Streets 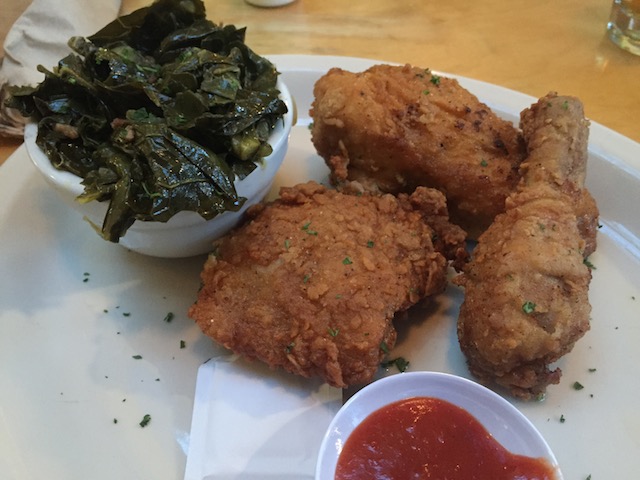 Brenda's French Soul Food/Brenda's Meat & Three
Brenda's recent expansion to Divisadero with Brenda's Meat & Three solidified a reputation for strong Southern cooking. There, buttermilk fried chicken is as it sounds: nearly creamy and wholly delicious. Over at the original outpost, Brenda's French Soul Food, they call it the B.F.C or Best Fried Chicken, advertising a secret recipe. Louisiana native Brenda Buenviaje nods to New Orleans at every turn, and her cooking is a down-home delight. —Caleb Pershan
652 Polk Street between Eddy and Turk Streets and 919 Divisadero Street between McAllister Street and Golden Gate Avenue 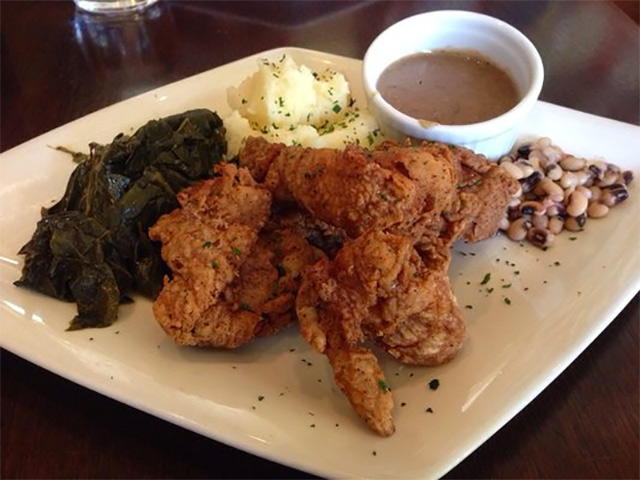 Eureka Restaurant and Lounge [Now closed]
This Castro dinner spot does not do everything spectacularly, but I will say the fried chicken is consistently some of the best in town. Longtime chef Gaines Dobbins trained with Paul Prudhomme and Nancy Oakes (at Boulevard) before helping to open Chenery Park and then Eureka, its sister restaurant which has outlived its sibling. The fried chicken is the hands-down best bet on the Southern-inflected menu (though Dobbins' gumbo is nothing to scoff at either) and it comes served with mashed potatoes, collard greens, black-eyed peas, and black-pepper gravy. In two words: old school.  Jay Barmann
4063 18th Street, near Castro 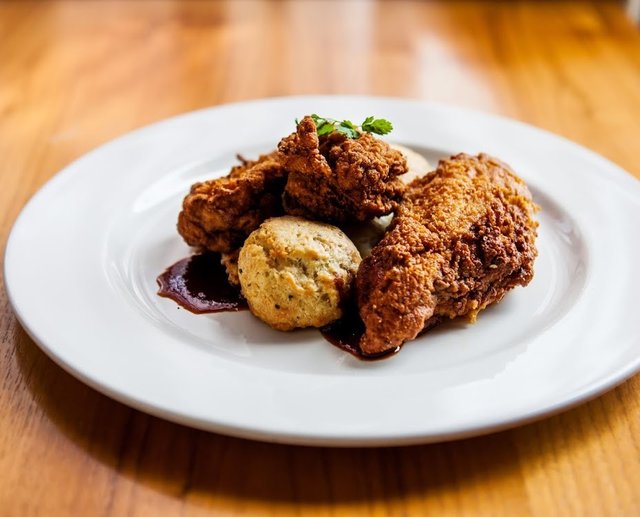 Photo courtesy of the restaurant

1300 on Fillmore [Now closed]
The well-designed elegance of this high-end soul food supper-club allows one to feel wildly sophisticated ordering a plate of $24, cooked to order fried chicken. Deboned and deep-fried in a skillet, this chicken dish is served with mashed potatoes, gravy, and (wait for it) a house-made chive biscuit. If the Neiman Marcus rotunda deigned to serve fried chicken, they would serve this version.  Beth Spotswood
1300 Fillmore Street at Eddy 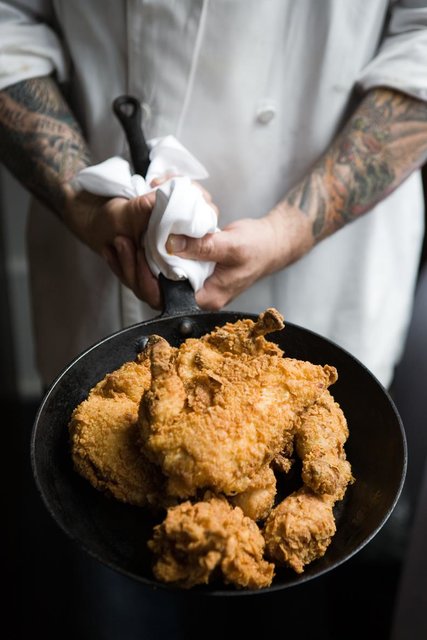 Photo courtesy of the restaurant
Town Hall Town Hall's fried chicken is so famous, a giant food porn photo of their chicken cooking a skillet graces their homepage. This is what they want everyone to think of when they think of Town Hall: fried chicken. That kind of confidence in a menu item only comes with years of commitment to the product and thousands of glowing reviews. Town Hall serves other delicious menu items in their classic lunch-and-dinner restaurant, but you should come for the fried chicken. It is, after all, their website wallpaper.  Beth Spotswood 342 Howard Street at Fremont 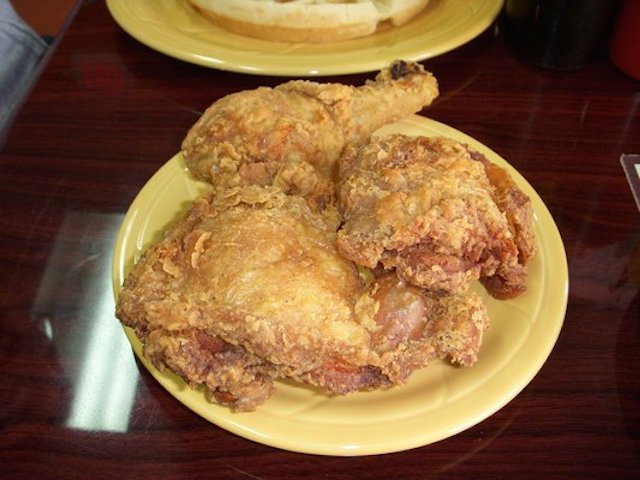 Frisco Fried
Chicken and waffles — a remarkable combination if there ever was one — are the staple of Frisco Fried, the Bayview eatery from Marcel Banks and his uncle Gregory Banks, There, every crispy piece is made to order, which means things usually take 15-20 minutes. But recall that good things come to those who wait. The "fried with pride" joint opened in 2010 to sling it's signature "S.F. style Soul Food," and however good those waffles are, they're really just a nice bed for the perfectly-battered bird. The black and orange interior shows great SF patriotism, but that's not the main event, either. You know why you're here!—Caleb Pershan
5176 3rd Street between Shafter and Thomas Avenues Caleb Pershan/SFist

One casualty of the now-resolved contract dispute at the West Coast port has been delayed glass deliveries that have held up San Francisco's many construction projects. As interior work on buildings can't begin

Photographer Vincent LaFloret's stunning, color-enhanced aerial views of SF made the rounds last week, including a piece in the New York Times discussing his post-production process using Adobe Lightroom. As he explains, digital