You saw the story, I'm sure. "Lice Infestation Delays Adoption Of Guinea Pigs Found In Dolores Park" is the headline at local TV broadcast station ABC7, and we reblogged their report here. But according to a spokesperson from San Francisco's Animal Care and Control, that ABC report (and, consequently, our post based on it), is full of crap.

First, here's the ABC article, which at publication time is also available here. 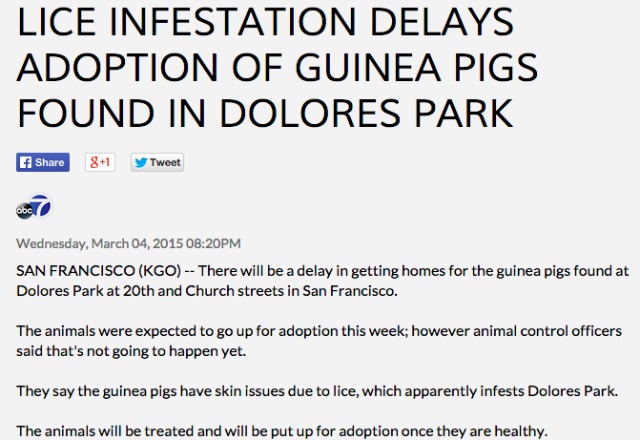 But according to SF ACC spokesperson Deb Campbell, who emailed me last night after seeing my reblog of the ABC report, it's a pack of hooey.

I wanted to respond to the piece about the guinea pigs. They definitely did not have lice. One guinea pig had some hair loss, but it was most likely from living in a damp burrow plus stress related to living outdoors and fending for itself. Our test for ringworm (fungus - same as athlete's foot) was negative. Ringworm was the first thing we considered, but never lice.

Well, that's weird, isn't it? No news organization is infallible, of course, but typically the error (unless we're talking WMDs or something) is a small detail, not a whole-cloth falsehood.

So, I asked Campbell how on earth ABC7 got it so wrong.

"We don't know where the mention of lice came up," Campbell responded. "Our officers may have told someone that the pigs would be checked over for health issues, parasites, etc.  but none of our staff said that they had lice, or that Dolores Park is infested with lice."

Oh, great, so that's wrong, too? So much for my "Trashy, Drunk Dolores Park Is Also Infested With Lice" headline.

"We have our veterinarians make animal health assessments - they're the experts," Campbell wrote. "Hair loss is something we see frequently for various reasons, but lice is never the first problem we consider when we see patches of bare skin on an animal."

At the time of our email interaction, Campbell has yet to contact ABC7 regarding their originating report, as "we just found out it was an issue." She says she'll be calling them today.

It goes without saying that I've updated my previous post on this subject, and apologize to you all for repeating ABC7's error, especially if it caused you even a moment of psych-out-induced itching.

Endangering professional athletes while delighting fans, actor Will Ferrell will play nine different positions on nine different teams today at Major League Baseball spring training in Arizona. Two of those teams are the

Jamal Trulove, now 34, has been acquitted in a retrial after spending the last seven years behind bars for a 2007 murder he maintained he did not commit. Some of you may remember

—
Story About Lice In Dolores Park Was Bunk
Share this