If you want to start a fight in this town, try bringing up the burrito thing. Everyone's got a favorite, and Mission boozehounds will go to the mat over the relative superiority of El Farolito and Cancun. Then that FiveThirtyEight blog had to go and crown La Taqueria's carnitas burrito the finest burrito in the nation, and while SFist can't get behind them on that judgement, it is certainly a fine burrito and kudos to La Taq for being blessed with even longer lines as a result. All of the above make our definitive, 2015 list of the best burritos in town, which at least a dozen of you are probably going to call bullshit. But this is a list we can stand behind, and will benefit all new arrivals in town who can't tell one Mission taqueria from the next.

El Farolito
Recommended order: carne asada or lengua
I'm obligated to list El Farolito, because it was at their 2779 Mission Street location that Rita Hao, Jackson West and I met in spring of 2004, in our first planning meeting for the website that would become SFist. Sentiment aside, however, the taqueria, which also has two more SF locations, offers the gold-standard Mission burrito, with endless choices of pork, chicken, and beef options — and with options like sesos, lengua, and cabeza, you know this place is not playing. And, look, guacamole is great, but sometimes you just want big fat slices of avocado sliding into your mouth, right? That's how they do it at El Farolito! Don't worry, it's a "healthy" fat.  Eve Batey
2779 Mission Street (at 24th Street)
4817 Mission Street (at Russia Avenue)
2950 24th Street (at Alabama Street) 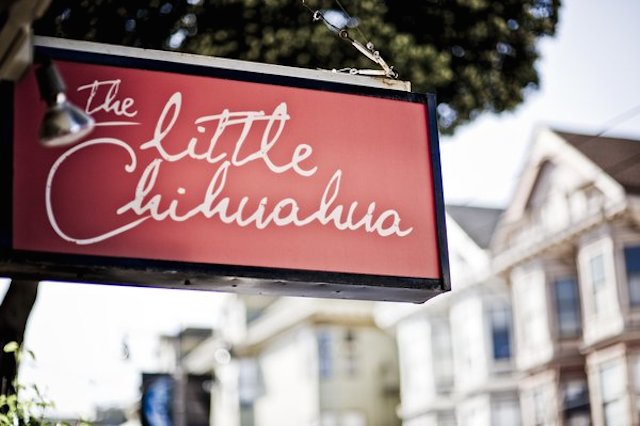 The Little Chihuahua
Recommended order: vegetarian burrito, or garlic shrimp
With three locations to its name, TLC or The Little Chihuahua isn't completely traditional, but it's completely delicious. Ingredients are carefully sourced, beef is grass-fed, and all that jazz. But it's generally just a pleasant, tasty burrito experience that's consistently on point. I'm partial to the garlic shrimp burrito here, although you can get mushroom and other vegetarian burrito options if your heart desires  and this is one of the only spots in town with actually vegan, non-larded beans. It's a little pricier to support its emphasis on sustainable ingredients, and I say, well worth it.— Caleb Pershan
292 Divisadero Street between Page and Haight Streets, 4123 24th Street between Castro and Diamond Streets, and 581 Valencia Street between 16th and 17th Streets


Pancho Villa Taqueria
Recommended order: grilled chicken super burrito
The Chron's Leah Garchik once described Pancho Villa as "the French Laundry of taquerias." I've never been to the French Laundry, so I don't know about that, but I will say that Pancho Villa serves one of the best burritos in SF. Watching the guy at the front of the place going nuts with that cleaver, seeing your meat sizzling on the grill moments before it goes into your tortilla, you realize that the anticipation is half the fun. And if your burrito needs a little extra something, Pancho Villa's remarkably-comprehensive salsa bar is there to rescue you. Oh, and don't ignore those buskers: one of them might be Beck.-- Eve Batey
3071 16th Street (Between Julian Avenue and Caledonia Street)

La Taqueria
Recommended order: carne asada, or chicken and red sauce
After their carnitas burrito infamously was named "America's Best Burrito" by FiveThirtyEight, La Taq suffered an inevitable backlash. Ignore the hype, and focus on the flavor: the restaurant's policy of using no rice in their burritos produces a streamlined, taste-concentrated slab... and that taste is good, good, good. Their carne asada super burrito is like a religion, and the chicken in red sauce burrito also gets high marks. Best of all, their tacos are also fantastic (some say they're better than their burritos), so when you're out with folks who "aren't in a burrito mood" you can stump those chumps with a "well, get a taco then, 'cause we're going to La Taqueria!"  Eve Batey
2889 Mission (at 25th Street) 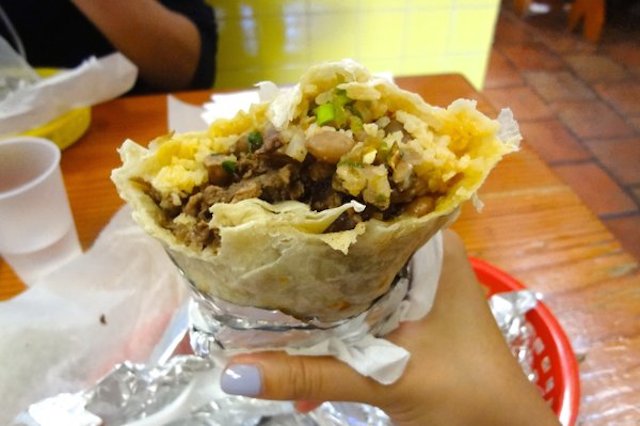 Taqueria Cancún
Recommended order: al pastor, all the way
Though taquerias Cancún exist south of Cesar Chavez on Mission Street and on Market Street — the Bernal location being very good — let's focus on the Cancún most people mean when they mention the legendary burrito joint, the one near 18th and Mission. For starters, the al pastor is, as they say, "everything," with just the right touch of pineapple sweetness. But all the super burrito combinations at this unassuming, bright storefront have amazing sour cream, rice, and avocado interplay that sets the stage for the meat of your choice, all with the backdrop of a nicely blistered tortilla. There was some fear about the place closing a little while back, and they've altered their hours slightly, but it's going strong by all accounts. If you recall, during the infamous, drawn-out "Burrito Bracket" days (now mercifully behind us) Cancún fared well, even gaining an endorsement from comedian Marc Maron. But beauty is in the eye of the burrito holder, so you be the judge. — Caleb Pershan
2288 Mission Street between 18th and 19th Streets 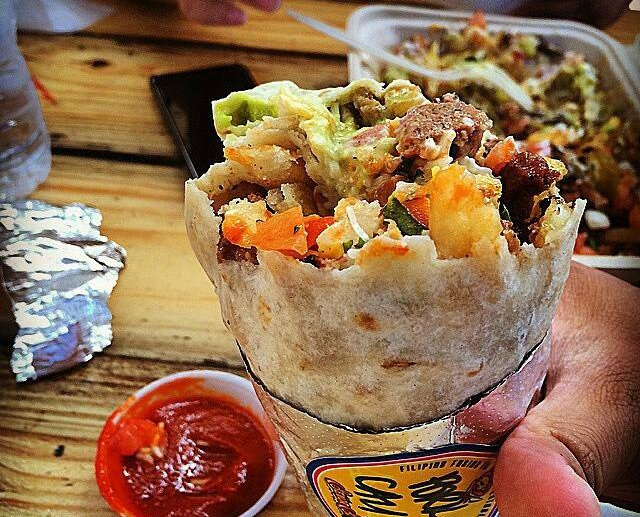 Senor Sisig
Recommended order: Pork sisig California burrito
Senor Sisig is one of the OG trucks in SF's now eight-year-old food truck craze, so much so that they've even made it onto Check, Please!. And how can you go wrong, really, with a California burrito (that's the one with French fries inside) stuffed with excellently marinated, Filipino-style pork sisig and dripping with cilantro-cream sauce. It is the stuff dreams are made of  and hangovers are made for.  Jay Barmann
Various locations. Check here. 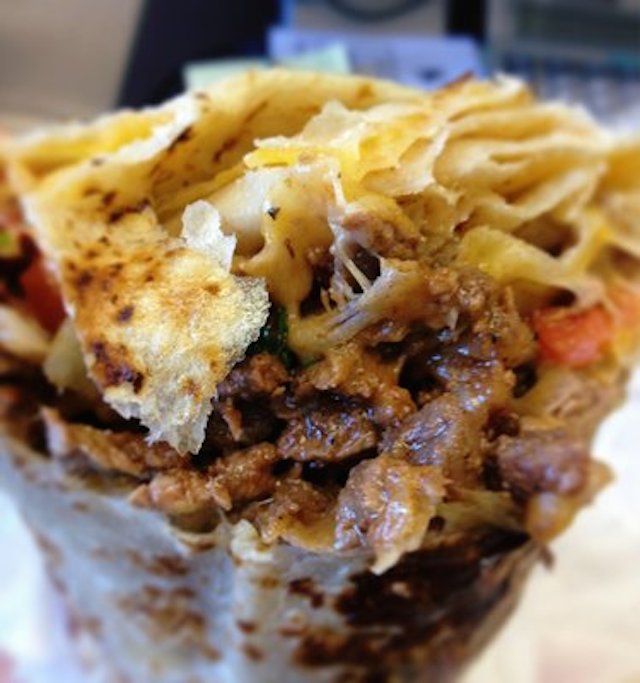 La Espiga De Oro
Recommended order: super carne asada
The juiciest meats and freshest ingredients conspire at La Espiga De Oro to make your tortilla-wrapped dreams come true. Be warned that just a few tables await inside this hole in the wall that closes at 7:30 most nights, but don't let that — or anything — stop you from a visit and a side of big, crispy chicharones. The super carne asada is the go-to, with perfectly melted jack cheese. Homemade chips and tortillas that are fresh to death ensure La Espiga De Oro's place in the burrito pantheon. — Caleb Pershan
2916 24th Street between Florida and Alabama Streets 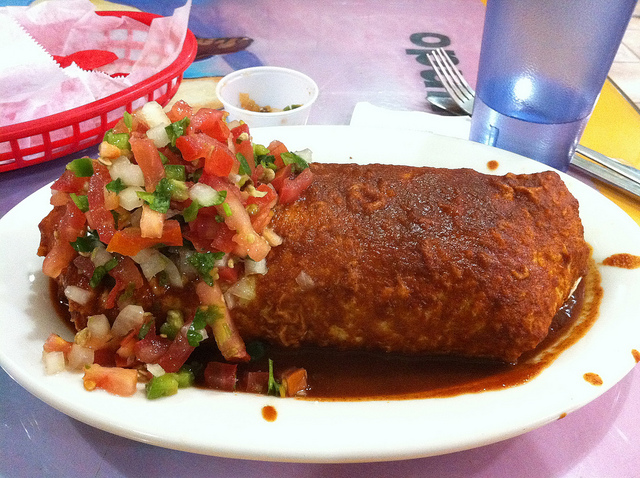 Los Coyotes
Recommended order: California burrito
This is by far the best Mission burrito shop... that stays open until 3:30 a.m. on Friday on Saturday nights. Yes, big caveat, I'm aware, but hunger is the best spice there is, and Los Coyotes serves the late-night snack San Francisco deserves. When the 2 a.m. crowd rolls in as the bars close their doors, the chefs here move with heroic speed and lightning reflexes to keep the line rolling, and it's a treat to watch them cook. The California burrito is a big favorite: that's cheese, sour cream, avocado, fries, and steak in a San Diego-popularized style.— Caleb Pershan
3036 16th Street between Mission and Valencia Streets 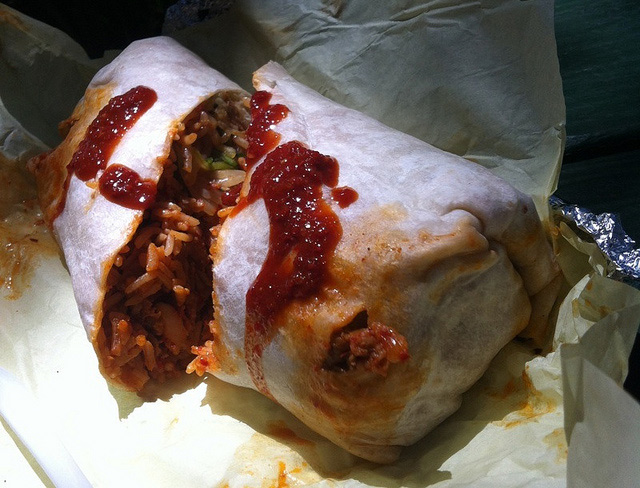 HRD Coffee Shop
Recommended order: kimchee burrito with pork
Like Senor Sisig, but taking a step in more Korean direction, the burritos at HRD are completely blasphemous, non-Mexican things. But they are damn good, and this place is always packed as a result. The star of the show is the spicy pork kimchee burrito, which comes stuffed with things like cucumber, sprouts, kiwi, and sour cream. It needs to be tasted to be understood, and I can promise you will be a convert. Added bonus news: they're now serving dinner on weeknights.  Jay Barmann
521A 3rd Street near Bryant 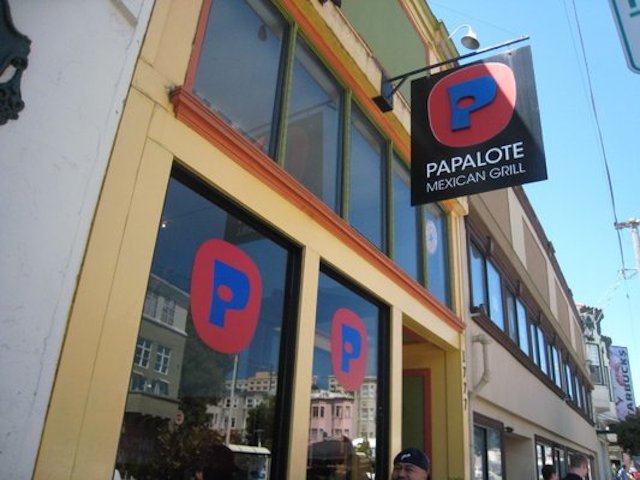 Papalote
Recommended order: the Triple Threat, or vegetarian options
Everyone knows it's all about Papalote's salsa: in particular, the creamy roasted habanero sauce that's smoky but mild. You're going to want to generously use that or other options on your burrito here, which is fine on its own but next level with the right dousing. Ingredients are good, in particular the grilled chicken, and the triple threat burrito, named for the Bay Area DJ crew called Triple Threat DJs includes carne asada, chicken and shrimp. It's kind of showboating, but it's awesome. Papalote was so popular in its Mission spot that it expanded to the Western Addition (thanks in part to a 2010 Food Network appearance on Throwdown with Bobby Flay). And it's equally well loved by vegetarians and vegans for options like soyrizo and tofu mole, and legitimately vegan beans. — Caleb Pershan
3409 24th Street between Valencia and Guerrero Streets and 1777 Fulton Street between Masonic and Central Avenues 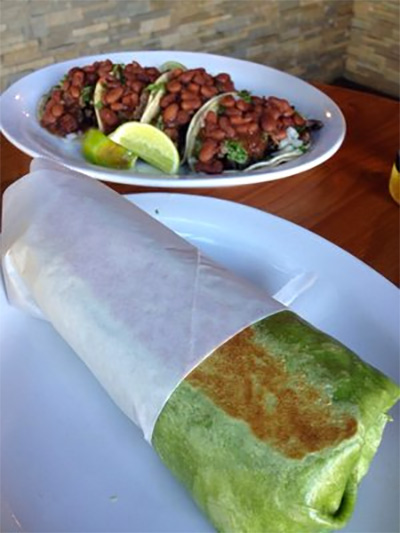 Tacos Club
Recommended order: chicken mole
Yes, this place is called Tacos Club, but I'm going to go ahead and say that they make the best burritos in the Castro, albeit not the cheapest. They do some good grilled chicken and carnitas, but the star here is really the chicken mole, with a sauce that's spicy-sweet and somewhat unique among local moles. And, for vegetarians, they do a solid nopales burrito which is kind of a holdover from the previous tenant here, La Fajita. (If only they had held over La Fajita's marinated pollo asado, which I dearly miss.)  Jay Barmann
2312 Market Street near Noe 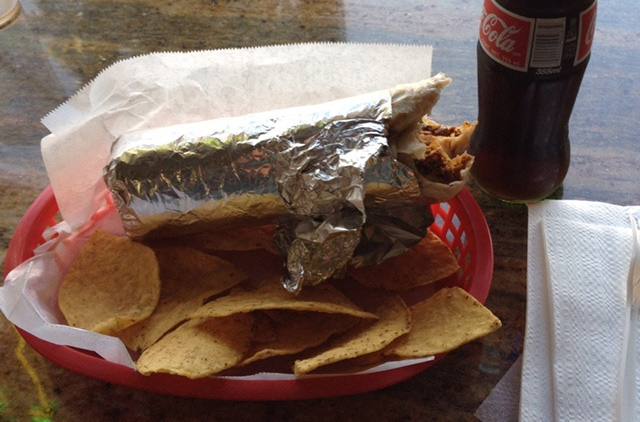 El Castillito
Recommended order: al pastor super burrito, or breakfast burrito
There are several El Castillitos around town, but I can only speak for the Church Street location, where quality has remained steadily high over the years and where they make, seriously, some of the best al pastor around (after Cancun). This place is also well loved for their breakfast burritos, stuffed with chorizo, and it should be noted that they take the time to griddle-seal their burritos, gently crisping them in the process, after they're stuffed and rolled.  Jay Barmann
136 Church Street near Duboce

Related: The 10 Best Nachos In SF
Where To Find The Best Tacos In San Francisco

Do you have some excess privilege lying around? Maybe you left some on the Google Bus or just littered it in Dolores Park? Or, would you like to take advantage of the privilege

A 70-year-old woman who has enjoyed the same rent-controlled Mission apartment for four decades is now facing some newly aggressive tactics from a landlord who wants her out. As CBS 5 is reporting,