Newsom, who dropped out of the Gov race in 2009 (reportedly, to give Jerry Brown a clear shot at the seat), said in his email that "I’ve never been a fan of pretense or procrastination...So today I’m announcing that I’m creating a committee to run for California Governor in 2018."

The Marin County resident says that "over the next four years, my advocacy and efforts on these issues as your Lieutenant Governor will continue unabated...But the reality of running for Governor - even four years from now - in America’s largest, most diverse state demands that I start raising resources now."

And just a few days after it was announced that his one-time consigliere/sock-puppet Peter Ragone was returning to California! What are the chances!?!

It's unclear if Newsom realizes that being governor would require him to regularly leave his nifty little co-working space in San Francisco for Sacramento, a city he famously referred to as "I just, ugh, God."

Guess he has a couple years to figure that one out. Anyway, here's the full text of his announcement note, including his campaign's nifty little logo. 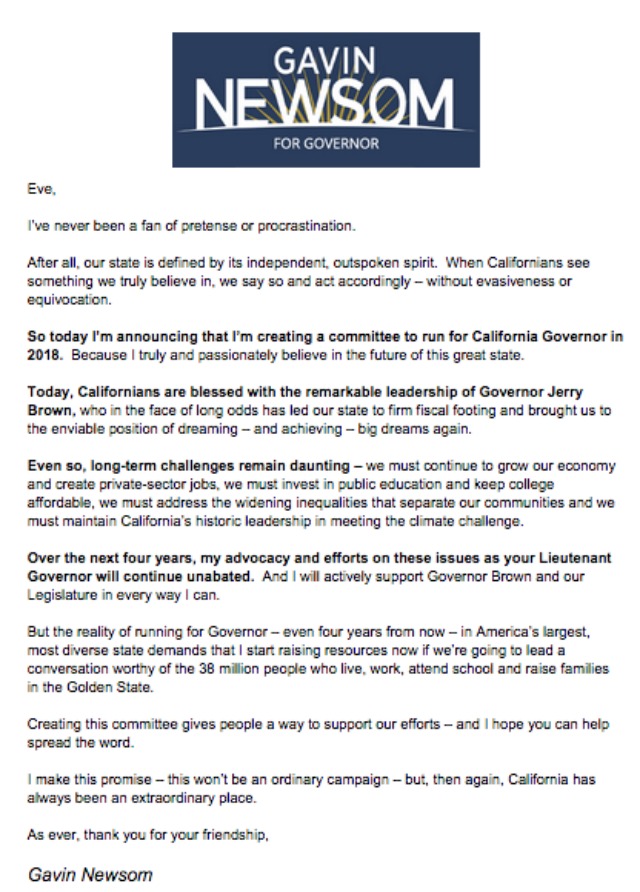 In Edo-period Japan (1615-1868), the most celebrated destination for hedonists was the Yoshiwara—a walled and moated pleasure quarter where patrons could abandon the rigors of daily life in pursuit of sensual delights.

Speaking out at a small school district board meeting last night in Marin County, six-year-old Rhett Krawitt spoke out in favor of a statewide bill that would remove the "personal belief" exemption from

—
As You Might Have Expected, Gavin Newsom Announces That He Is Running For Governor In 2018
Share this